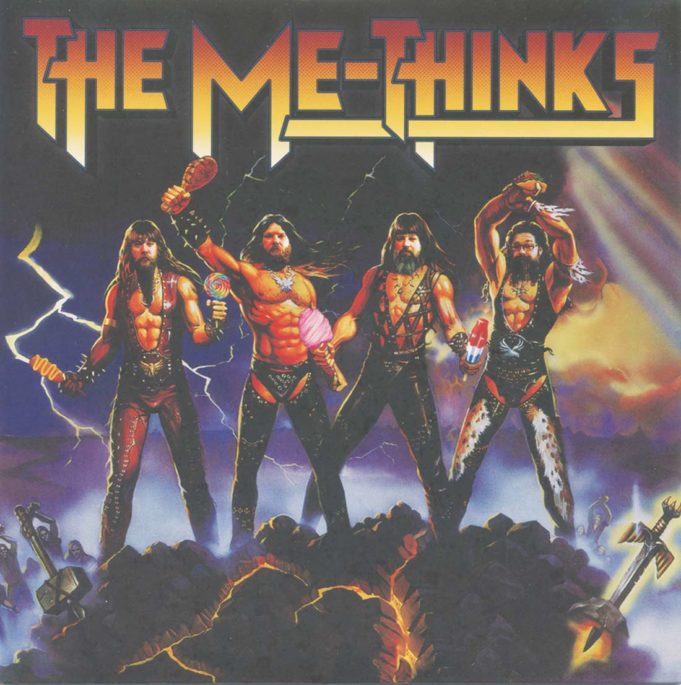 If you ask me, the whole notion of “songwriter” as a type of music is meaningless. Even the person who wrote the lyrics to “Louie Louie” is technically a songwriter, and that song is arguably more important in the grand scheme of things than anything Bonnie Prince Billie has or will compose.
You want songs with interesting characters and the choices they make? Have you ever listened to The Me-Thinks? They have a song called “Speed-hair” about a guy whose hair is brittle and spaghetti-like because he does a lot of speed. Just about every Me-Thinks song could be turned into a TV show (about rock ’n‘ roll losers), and the four-piece’s latest, recorded by Jordan Richardson at Electric Barryland, is a two-song, 7-inch record that doubles-down on local rock ’n‘ roll legends.
“Aloha, Mr. Dude,” salted with David Lee Roth samples and squealy metal licks, is an ode to a substitute teacher who “puts the high in high school” and bangs “the chaperone mom.” The flip-side, “Rock Deaf,” is an anthemic celebration of giant amps and ringing ears. Even if you don’t have what the track describes as “arthritis of the eardrums,” both tracks are rife with riffage and hilarious details, the kind of scenes that make your choke on your bong hit or shoot beer out of your nose. — Steve Steward