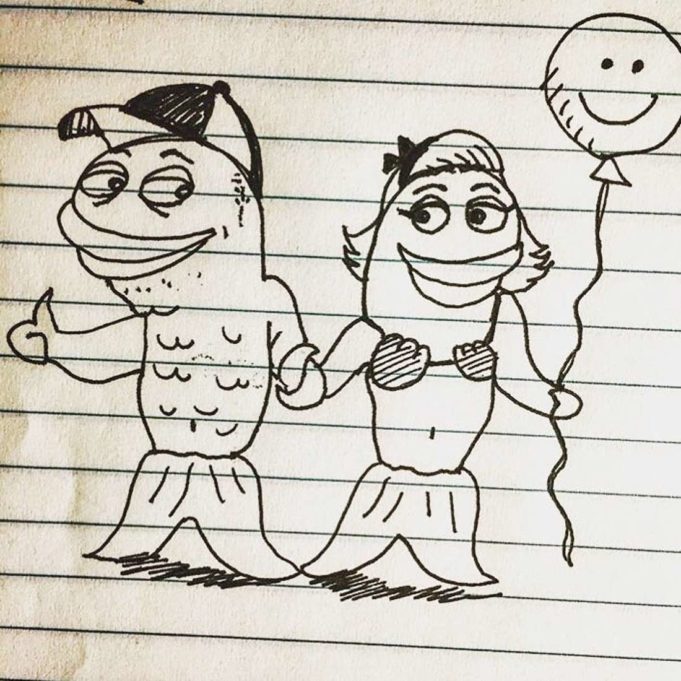 A lot has changed for I Happy Am since its beginnings as a solo musical outlet for Fort Worth artist Rebekah Elizabeth. After about a year of releasing online home recordings of her songs, Elizabeth’s boyfriend Zachary Zanetich hopped onboard, and the pair have been writing as a duo ever since. The band is on the verge of releasing its debut album, The Prophet, The Giant, and The Invisible Man.

“I practically begged her to let me join,” Zanetich said. “Her songs were great, and I knew I wanted to be part of creating with her. I Happy Am is very much Rebekah’s project, but I felt like I could add to what she was doing.”

Together, the couple has cultivated a sound that is whimsical and lighthearted while still touching on serious subjects. Quick to agree that tragedy is often coupled with happiness, Elizabeth and Zanetich try to balance imagery of each throughout their songs.

The Prophet, The Giant, and The Invisible Man was recorded over the past year at Joe Tacke’s One Horn Studio (Mean Motor Scooter). Zanetich and Elizabeth said Tacke had such an impact on the album that the two consider him the band’s third member.

“Many of the sounds you hear on the album wouldn’t be there were it not for him,” Elizabeth said. “He was patient with us when we were looking for the perfect tone from an organ or pedal, and his expertise is something we couldn’t have recorded it without.”

To more accurately recreate the record’s sound in a live setting, the band has been working with what Zanetich describes as a local supergroup consisting of Tacke and Jeffrey Chase Friedman of Mean Motor Scooter on guitar and drums respectively, Victor Touruno of Svenny Baby on keyboards, and Richard Hennessy of Henry The Archer pitching in on a number of instruments. This new six-piece incarnation of the band will debut Sat., Oct. 21, at Lola’s Saloon.

Not only will more players onstage fill out the band’s sound, it will also allow Elizabeth and Zanetich to further explore the visual side of the band’s live show.

“We do have a lot of theatrical ideas that we want to explore,” Elizabeth said. “Having more members will allow us to branch out a bit more, make our show even more of an experience.”

The visual element of the I Happy Am live performance, which often includes the use of props onstage and a decent amount of interaction with the crowd, may sound a little gimmicky, but it’s never forced or heavy-handed.

The pair is also taking a new approach at marketing its music. Zanetich is a host on The Funkytown Podcast and has been using his knowledge of the medium to promote the album’s release.

“I listen to a lot of podcasts,” he said. “We have been sending our music out to radio stations, but by appearing on other podcasts, we can pinpoint the audience that is hearing our stuff.”

Music isn’t the only passion for Elizabeth and Zanetich. The couple spends what free time they have producing short films that they publish on their Facebook and YouTube pages. One of their ongoing ventures is a serial starring their alter-egos, “Billiam and Bobert.”

“That’s actually our next project,” Zanetich said. “We plan to film a longer version of Billiam and Bobert. We already have the script written. As opposed to the three-to-four-minute pieces we have up now, the next one will be around 15 minutes. It will wrap up the cliffhanger from the end of our last episode.”

In the meantime, I Happy Am is gearing up for the release party for The Prophet, The Giant, and The Invisible Man on Saturday at Butler’s Alley & Antiques. Along with the debut of the album, the family-friendly event will include food trucks, carnival style games, and a live recording of The Funkytown Podcast.