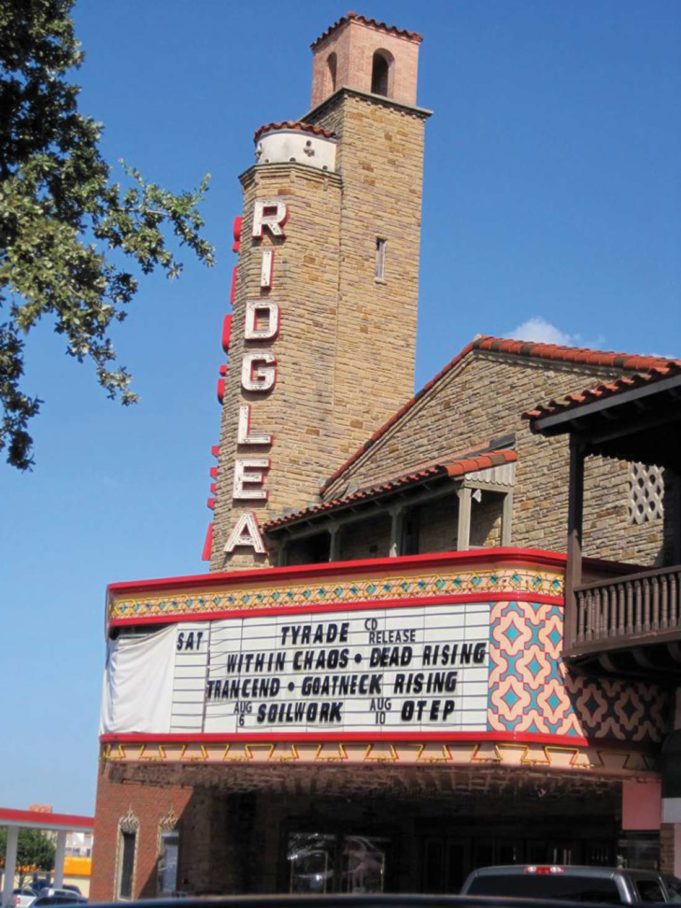 The Star-Telegram recently said that Jerry Shults has almost completed work on a key piece of rock ’n’ roll real estate. A venue inside the Ridglea Theater, the historic building purchased by the Gas Pipe magnate in 2010, the Ridglea Room is the address to where the popular TCU-area venue The Moon was supposed to relocate nearly five years ago, before people started wondering, “Where the hell’s everybody going to park?”

Now that the Star-T says the parking issue has been settled, let’s give a Fort Worth welcome to the Ridglea Room. Sophisticated and theatrically lit, like if a Virgin Airlines flight were turned into a 350-person capacity concert hall that was currently being used as an art gallery, the Ridglea Room, based on a Star-T video, looks great, but in the grand scene of things, will it make a difference?

Dallas still has several large venues that rely on 60-mile radius clauses to preclude big acts from playing clubs in nearby municipalities, chiefly in Fort Worth. You can talk to Affalon –– or Black Box or Transmission or whomever else –– about booking your giant historical theater or its newly renovated room, but if the Granada Theater wants to book the Mighty Mighty Bosstones, the Granada Theater is gonna get the Mighty Mighty Bosstones.

Here’s to hoping, though. I have a lot of great memories of experiencing incredible shows at the Ridglea, and the new room could potentially be a great place to play.

The next show at the Camp Bowie/Bryant Irvin building is Saturday, Sep 17, when the Dallas AC/DC tribute band Back in Black will perform in the theater, along with a burlesque troupe.

Anyone else know how this story’s gonna end? –– Steve Steward

One thing that the Ridglea Room has going for it is that I didn’t write about it first. Just about every “new” venue I’ve broken the news on –– from Queen City Music Hall and the Wayside Ballroom, to Whiskey Girl Saloon and, yes, The Moon-Ridglea –– has done one of a couple of things: flamed out (Queen City), changed tacks (Whiskey Girl, from all genres –– including progressive, original local music –– to country), shifted into standby mode (Wayside), or never left the ground (Moon-Ridglea). I’m not saying I’m a curse (though my family thinks otherwise, the jerks). I just may be too gullible. Sue me for wanting to believe that Fort Worth can be a cosmopolitan, progressive city. “A 3,000-capacity venue will open in town any day now …”

One venue I wrote about first that’s turned out OK, though, is Lola’s Saloon. Almost as if to prove that the brainchild of former Wreck Room founder Brian Forella is not only too legit but too legit to quit (ugh), the space at 2736 W 6th St (817-877-0666) will host The Me-Thinks, self-proclaimed “Fort Worth’s shittiest band,” on Saturday. Along with Duell and The Hickoids, frontman Ray-Ray Liberio and company will be celebrating the release of a two-song 7-inch. Produced by Jordan Richardson (Son of Stan, Oil Boom, Squanto) at Electric Barryland in Justin, “Aloha, Mr. Dude” –– “salted with David Lee Roth samples and squealy metal licks” (“Listen Up,” Aug. 31, 2016) –– and “Rock Deaf,” an anthem to “giant amps and ringing ears,” are far from shitty. They’re pretty damn essential.

Other than Lola’s, would a band as under-underground and beloved as The Me-Thinks play anyplace else in town? In North Texas? No, but if Jerry Shults only understood that booking them –– or Mean Motor Scooter or Squanto or War Party or Starbass Laboratories or any other relatively inexpensive yet wildly popular and immensely progressive Fort Worth band or artist –– would not only shut everyone up but have us partying like it’s 1999, we wouldn’t be sitting here rubbing our closed eyes, shaking our heads, and sighing repeatedly.