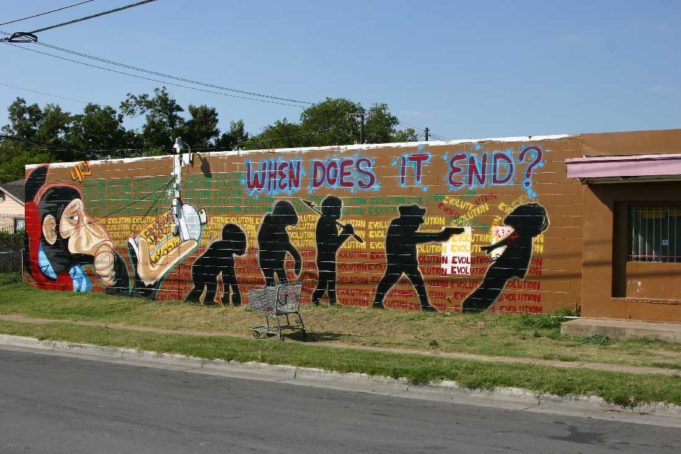 The Man. He’s always trying to keep us down. Like when all you want to do is have a few harmless illegal gambling machines in your convenience store, he takes them away. Or when you paint a mural on the side of your building depicting graphic police violence, he finds a loophole in the so-called “law” to get rid of it.

The city requires anyone who wants to paint a mural to get a permit first. Why? The folks over at Rocky’s Drive Thru convenience store on Hemphill Street answered that question. The “art” on the side of their building, neighbors say, is a little over the top.

A spray-painted rendering of that old human evolution image from your high school science textbook scrolls across the approximately 50-by-15-foot expanse of bricks and mortar. For you younger readers trapped in the Bible Belt who attended school after Republicans deleted every mention of Charles Darwin and replaced it with the phrase “God did it,” the image in question shows the phases of evolution, starting with our hunched-over ape-like ancestors and ending with an upright muscleman holding a spear. Rocky’s version starts with a monkey holding a spray paint can and ends with what appears to be a cop shooting a bleeding-out black person. The caption “When does it end?” is painted above the scene. Forgetting the place’s misreading of how evolution works (someone tell the artist that Harambe wasn’t involved in the evolutionary process), the picture is colorful and kind of cool looking.

Neighbors expressed little support for the mural at a recent meeting of the Hemphill Corridor Task Force, a coalition of neighborhood folk working to attract businesses and improve conditions in the area. They voiced outrage over the tagged wall, calling it “inappropriate” and “obscene.” A local police officer assuaged the crowd by telling them the mural would eventually have to be painted over because the artist didn’t obtain a permit. He also said he’s giving the business owners time to do the right thing before the city has to intervene, and he added that the folks at Rocky’s were already disgruntled after police took away their 40-liner gambling machines.

The owner of the business didn’t return my calls and wasn’t there when I went looking for answers, so we don’t know what motivated the project. But the message behind the mural shouldn’t be so easily dismissed.

In Fort Worth, we’ve been pretty fortunate to avoid the national spotlight cast on places like Baton Rouge, Charlotte, Los Angeles, St. Paul, Tulsa, and too many other cities. The truth is that our city’s police department has a pretty good record of not shooting black people. That doesn’t mean locals haven’t felt the reverberations of racist atrocities.

It’s a shame that people of color are getting shot so frequently by police and then suffering the indignity of the weak white-people response. Yes, blue lives matter. All lives matter. But that kind of tone-deaf reaction to a serious problem plaguing a specific community in our country is a little bit like telling someone in a burning house, “All houses matter.”

We’re all for sticking it to The Man when warranted, but in our fair burgh, The Man gets to decide whether a protest of The Man is acceptable for public consumption. So who knows whether the city would have allowed the mural in the first place? It’s very clear that most neighbors of that bourgeoning part of town don’t like it.

Everyone is a critic.