Eastsider and Texas Wesleyan University alum Kimberly McLean worked up a sweat on a recent afternoon while admitting that she knows very little about gardening. Still, she shoveled a small mountain of mulch onto her one-eighth acre lot at 2900 Avenue C, just a block west of the Wesleyan campus. She bought the litter-strewn vacant lot on August 17 specifically to create an urban farm, which she has dubbed PolyWes Gardens.

“There was a lot of inspiration,” McLean said. “I looked at my neighborhood and saw so many vacant lots and thought there was something that could be done to beautify the community and not make it look so depressed. So I thought I’d buy a lot and start a community garden.”

People who live in the low-income neighborhoods near Wesleyan, especially Polytechnic Heights, don’t have easy access to fresh fruits and vegetables at low cost, McLean said. And blight is a problem.

Drive down East Rosedale Street or East Lancaster Avenue in that southeastern part of town, and you’ll see the dilapidated houses and ramshackle buildings, high weeds and trash overtaking some of the vacant lots, and skinny stray dogs and feral cats — many ending up as roadkill — contributing to the overall impoverished look of the area. McLean with the Wesleyan student body and a few nonprofit organizations are banding together to help improve the area.

McLean has been working on renewal efforts for almost two years. She broke ground on PolyWes Gardens late this summer, and her goal is to be up and running by the end of the year.

“I don’t know anything about gardening, so that’s been a challenge,” McLean said. “It’s been really easy with help from the Tarrant Area Food Bank, who provided me with resources like seeds and helped me find connections for funding my project.”

The university has partnered with PolyWes Gardens, not by providing money but by offering gardening volunteers. And Beta Gamma Sigma, the school of business honor society, is hosting charitable events on campus to help raise money for other initiatives. For instance, the group threw a “K-9 Karnival” in September to teach responsible pet adoption and ownership to local residents. Project manager Kelsey Fulton, a general business major at Wesleyan, said dogs being forced to breed in unsanitary conditions, or “puppy mills,” as the practice is referred to, is a contributing factor to the amount of animal abuse in the area. Lack of more proper adoption options in the area is why the event included supporters such as the Humane Society of North Texas.

“Puppy mills are really bad,” Fulton said. “It’s something we don’t condone and hope to put a stop to by teaching people about adoption.”

The area has also caught the attention of Amadi Guess Foundation, a nonprofit whose mission is to provide children from low-income communities access to nutritious meals. The foundation has worked with various schools and organizations in the Poly area for seven years to provide food, tutoring, and mentoring to area children.

This year the foundation looked to Wesleyan for student volunteers to help with their projects at the Boys & Girls Clubs of Greater Fort Worth, said Victoria Goodlow, project director of the Amadi Guess Foundation.

“Texas Wesleyan is within close proximity of our sites,” Goodlow said. “We wanted to recruit college students because of their flexibility and great qualities. However, we do not have a formal partnership with the school.”

Wesleyan alum and student organizations, along with the nonprofits and do-gooders such as McLean, are attempting to reinvigorate Poly through elbow grease and love.

“There always has to be one person here,” McLean said. “And when I first started this garden, people asked me, ‘Are you that one person?’ And that meant days I’d be shoveling mulch all by myself. While that’s been a challenge, I’m committed to the project.” 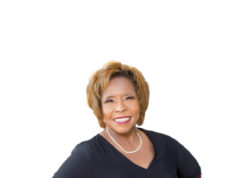