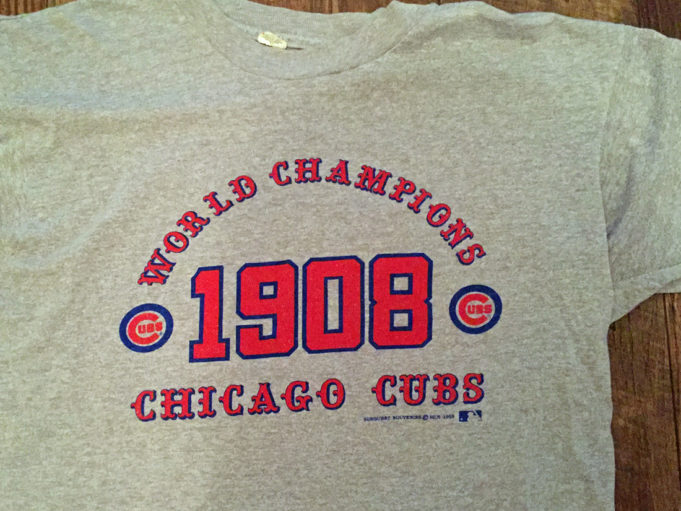 There will be joy in Mudville. Either the Chicago Cubs or the Cleveland Indians will win the World Series this season.

I have a t-shirt that reads “World Champions, 1908, Chicago Cubs.” It’s theoretically funny because that was the last time the franchise took home the title. They haven’t played in a Fall Classic since 1945, where they lost to the Detroit Tigers. Cleveland finished 11 games back that year, but three years later won their most recent world’s championship.

Both teams have come close since those postwar days, but a merciless collusion of Cinderellas, overzealous fans, and goat owners has conspired to deny them the prize. No Ernie Banks, Jim Thome, or Milton Bradley could seem to push them through.

Each franchise has changed its fate in part by adding components from a club that previously occupied a “haven’t won since before there was TV” slot. Theo Epstein and Jon Lester went from the Red Sox to the Cubs. Terry Francona and Mike Napoli left the Bostonians for Lake Erie’s shores.

Both clubs’ woes have immortalized them in pop culture. The Cubbies had WGN-TV’s national reach and Harry Caray’s thunderous personality. The Indians had Rick Vaughn, Willie Mays Hays, and the movie Major League. Both vehicles served to engender widespread sympathy for the teams’ desperate but loyal fans.

I wouldn’t argue they don’t deserve the support. My father grew up going to games in Wrigley Field and I’d love for him to see them win a Series in his lifetime. His brothers passed away in their eighties having never gotten to see the spectacle.

Do Cubs and Indians fans deserve it more, however, than, say, the fans of a team who has never won? Pretty much all clubs have had some form of heartbreak, and it’s tough to rank a Nelson Cruz moment over that of a Steve Bartman or a Jose Mesa. Hey, I’ve at least got a 1908 World Champs shirt. I can only get a Rangers equivalent by buying it off a kid in some faraway obscure country.

Eight MLB teams have never won a title : Seattle (Pilots)/Milwaukee, Houston, Washington/Texas, Seattle (Mariners), San Diego, Montreal/Washington, Tampa, and Colorado. The two oldest, the Texas-based teams, entered the Majors in 1961. Montreal/Washington and Seattle (Mariners) have never even participated in a World Series. Milwaukee and Washington are somewhat special cases because previous franchises based in those cities won titles (in 1957 and 1924, respectively) before they moved.

The math indicates at least one team will always be at least 30 years between titles (the Mets, for instance, were the 1986 winners and haven’t lifted the trophy since). How long would they have to go before they would belong in the same sympathy stratosphere as the winless-since-their-1977-inception Mariners?

One reason many have ranked the Cubs at the top of the commiseration list has been the loyal support of its fans. For the last 30+ years, they have regularly filled Wrigley even when the players underperformed on the diamond.  Cleveland had some strongly attended seasons, too, but its fans’ affinity hasn’t proven as consistent as the loyalty shown in Wrigleyville. Of the never-wons, the Rockies have led MLB in attendance five times and the Mariners twice. The Rangers came close off a World Series appearance and the Astros finished second when they opened the Astrodome, but for the most part these teams have not threatened to win the fan loyalty battle either.

Should we add overall sports droughts to our compassion calculations? Cleveland’s basketball team just ended their city’s, which dated to 1964. Chicagoans have had the Blackhawks, and the Seahawks, Mavericks, Lightning, Broncos, and Dynamo have provided non-baseball sports celebrations over the last couple of decades for some cities on the list. San Diego and Milwaukee have waited 53 and 45 years, respectively, for a parade.

So for whom should a neutral fan cheer hardest? Maybe take a page from my brother-in-law. He comes from Bulgaria and has no traditional baseball loyalties. At the beginning of each season, he adopts a team picked to finish near the bottom. If they do better than expected, Alex can be happy. If they finish where predicted, there’s no disappointment. Choose any team on this list and if a World Series title arrives in due course, you’ll be happy. If not, it’s just what you’re used to anyway.

This week, though, you can cheer for the Cubs or the Indians. Enjoy a historic World Series. And maybe next year will be the year the Rangers lay to rest whatever curse has landed them in the same column with the 1908 titlists.