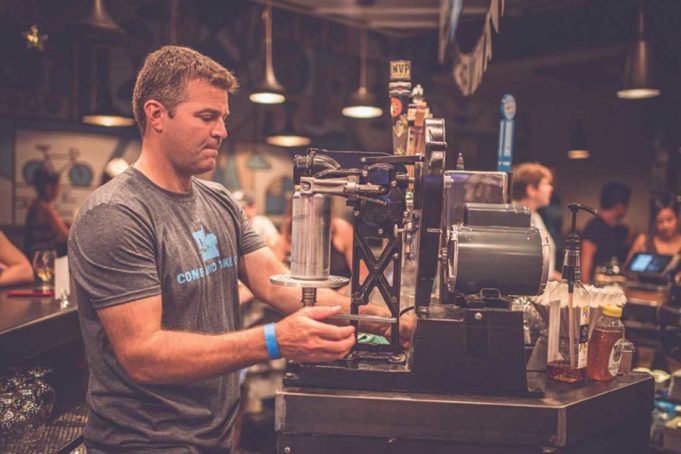 Two ongoing lawsuits have Texas’ craft beer scene watching, and one of them involves a Dallas brewery.

Deep Ellum Brewing Company owner John Reardon is awaiting a ruling that could allow Texas breweries to sell beer directly to consumers. Many states allow breweries to sell sixers to visitors. In Texas, brewpubs, distilleries, and wineries can sell booze to go.

Reardon’s legal team filed a lawsuit earlier this year against the Texas Alcoholic Beverage Commission, claiming that breweries are denied the same rights as other alcoholic beverage producers, a right, he said, that’s protected under the 14th Amendment’s Equal Protection Clause. While his argument sounds straightforward, TABC needs only to make the case that breweries are fundamentally different than wineries and distilleries to win.

That argument is “silly,” Reardon said, “because we all make alcohol using fermentable sugars and yeast. It’s no secret that special interests are being protected here.”

He believes that retail outlets and beer distribution companies don’t want anyone cutting in on their market share.

“Whether we win this lawsuit or if it happens in the legislature,” Reardon said, “we have to allow smaller breweries to build their brand outside of their own taprooms. Otherwise, small brewers are not going to have access to the market.”

“I think public support for our stance is strong,” he said. “Part of our work has been educating and teaching people about the unjust laws we live by.”

In Austin, Mike McKim is fighting a similar battle. Founder and CEO of Cuvée Coffee Bar, he stumbled upon his first crowler (a large, resealable can) a few years ago in Colorado. When his coffeehouse added 10 craft beer taps two years ago, he decided to offer to-go beer in the large cans. In his first six months, he sold 944 crowlers.

“Somebody might come into Cuvée and discover a new favorite beer,” McKim said. “If they can’t get it off the shelf [at retail outlets], I’d say, ‘OK, we’ll fill a crowler for you.’ ”

A little over a year ago, McKim said, a TABC official said the crowler machine violated TABC code.

“I asked what our options were,” McKim recalled.

He was told he could either lobby the Texas legislature in 2017 or disagree with TABC’s interpretation of the law formally through the court system. Option 2 sounded quicker.

“ ‘I’ll keep selling crowlers, give us your citation, and off to court we go’ was basically the message we got,” he recalled.

Although McKim’s staffers continued selling crowers as part of an agreed-upon legal process, state officials treated the matter like an undercover investigation. McKim still remembers the phone call he got when he was off work last September. It was his manager. She was in tears. The store, according to various news reports, had been raided by armed state police.

“So, suffice to say, we had a contentious relationship [with TABC] from the very beginning,” McKim said.

The charges are still pending and sound serious: illegally manufacturing an illicit product. They may be dubious, though. There’s nothing illicit about draft beer, and McKim believes there’s nothing illegal about a retail business packaging it into a sealable can.

Court deliberations ended recently, and a ruling is expected on or before December 7.

“It’s not a secret that Big Beer would like to get rid of [crowlers] altogether,” McKim said. “If they take our beer and wine license, it’s gonna hurt, but it won’t put us out of business. We can fight it, whereas somebody selling beer and wine for their livelihood can’t. It’s kind of funny how this coffee guy became a champion of craft beer.”

The TABC has already lost a big legal battle to the craft beer breweries. Last August, State District Judge Karin Crump ruled in favor of independent breweries and against the state regulatory agency. At the heart of the nearly two-year lawsuit – filed jointly by Live Oak Brewing Company, Peticolas Brewing Company, and Revolver Brewing – was Senate Bill 639. Passed in 2013, the law, added at the behest of Wholesale Beer Distributors of Texas, a trade association that represents Texas distributors prevented breweries from selling their territorial rights to distributors. Craft breweries, said Peticolas Brewing owner and namesake Michael Peticolas, use the sale of territorial rights to fund reinvestment in their companies. Rather than go to trial, the breweries’ legal team asked the courts to rule on the constitutionality of the law itself. The breweries won.

Shortly after the ruling, Peticolas told Dallas Business Journal he was thrilled with the outcome. In that same article, Matt Miller, the attorney representing Peticolas. said the ruling is “a victory for every Texas craft brewery, and the customers who love their beer.”