As I walked into HopFusion Ale Works on a recent drizzly evening, I witnessed a possibly historic moment. The co-owners/cofounders of the Near Southside brewery, Matt Hill and Macy Moore, joined by Moore’s wife Rebekah and brewery volunteer Adam Bostick, were pouring the first pints of suds from their taproom bar. The room soon filled with the sounds of clinking glasses and mirthful exclamations of, “Cheers!”

Hill only half-jokingly told me that if he knew how hard the process of opening a brewery would be he might never have started. There were several instances, even as recently as a few months ago, when it looked as if the venture was not going to make it. Navigating a labyrinth of city, county, state, and federal red tape and inspectors is only part of the many challenges that face a new craft beer brewery.

The co-owners are pacing themselves for the long haul, only slowly opening new accounts. The taproom will be opening in the coming weeks, and Hill and Moore are ensuring they aren’t overextended and can properly service the inevitable throngs of curious hopheads.

Hill’s background as a mechanic and Moore’s 23-year stint in the corporate world did not lead them to think they would ever be in the beer business. The two did share a passion for homebrewing, and two years ago they agreed to take the plunge and open their current venture.

“We wanted to be in the [Near] Southside,” Moore recalled. “We love this community. We looked for cheaper places outside the 820 loop, but there wasn’t the same community there. We wanted a production brewery where people could visit most days of the week.”

After an exhaustive search, they found the current location on the southeast corner of East Broadway Street and Bryan Avenue. The ceilings weren’t quite high enough, and special-order brewing equipment had to be ordered. But the location was perfect.

Then came the setbacks.

Various government certifications had to be obtained in a specific order, Moore said, meaning that any setback meant a snowball of delays for inspections and contract workers.

Hill points to one requirement by the Texas Alcoholic Beverage Commission as an example. The regulatory agency requires brewery owners to place an ad in their city’s daily paper stating their intent to sell alcohol, Hill said.

“We had to go back four times,” he recalled. “Our first ad didn’t have alcohol spelled out fully. Then we didn’t spell out ‘Fort Worth.’ There was always a different officer to speak with each time we went.”

Each time, Hill recalled saying, “Tell us what we need to fix, and we’ll fix it.”

Last March, a city inspector told Moore over the phone that his brewery would not be approved.

“The city says [a brewery] has to be at least 10 feet from a residential building,” Moore said. “A city inspector came out and said we were only eight feet. That was literally one of the moments I felt was the end.”

Moore called Hill, telling him to head to HopFusion. After confirming the true distance was 12 feet, Moore left a message with the city inspector.

“We waited three days,” Moore said. “That guy had no idea he was about to ruin the livelihoods of two people. He had no idea, and he didn’t care about it.”

Sitting in the now-finished brewspace, the two can joke about it. But it has been a reminder that there is more to owning a brewery than making beer.

“Brewing beer is maybe 2 percent of our lives now,” he said. “It sounds weird to say, but I think if you are truly passionate about beer, see if you can get a job at a brewery first or homebrew and love it as a hobby. Opening a brewery is wonderful, but it is not as romantic as people think, ending your days so drop-dead tired you can hardly move.”

The co-owners said they owe a debt of gratitude to other craft brewery owners and staff for lending a hand whenever needed. Now the HopFusion cofounders can turn their attention to booking bands, organizing karaoke nights, and managing Fort Worth’s newest craft beer brewery and taproom. Nearby, as we finished our beers, I commented on a weathered chain link fence that partitions the bar and brewspace.

Before being moved inside not too long ago, the fence kept trespassers away, Moore said. Like the interior artworks by local artist Jeremy Joel, the idea is to preserve a bit of the rough-and-tumble facade of HopFusion’s neck of the Near Southside before it disappears. The HopFusion venture has taught the brewmasters that a lot can change in two years. 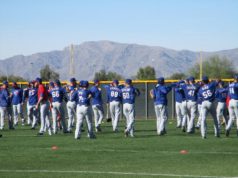 Springing into the National Pastime 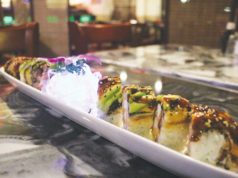 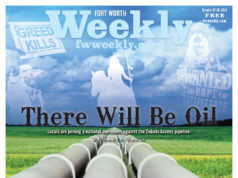 There Will Be Oil