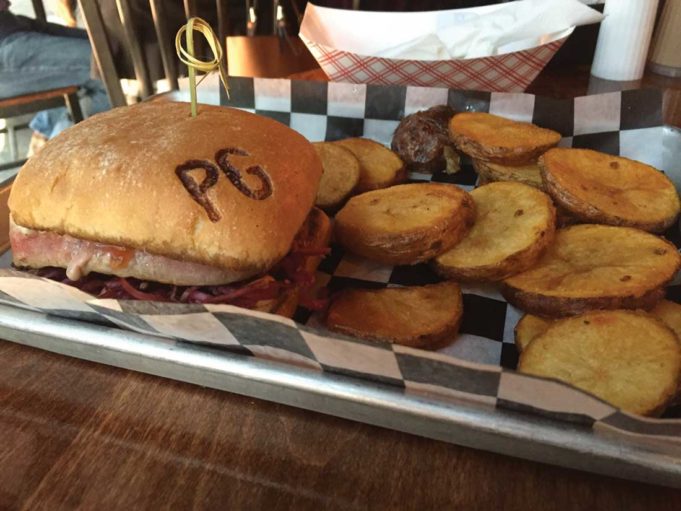 The moment I saw the cute “PG” brand singed into the hamburger bun at Pouring Glory Craft Beer Growler Filling Station (1001 Bryan Av, 682-707-5441), my mind conjured an image of a young beer-centric chef donning a Stetson hat and white chef coat lassoing his first brioche bun. I imagine the bun shrieked in agony for a moment after the branding iron touched its soft, buttery exterior –– but you don’t want those things running amok all over Rosedale Street.

Pouring Glory is the most beer-y place in all of Fort Worth beerdom. Don’t go if you’re into Miller Lite or any other macrobrew, for that matter. The bar’s entire selection of suds is of the craft variety, and a goodly amount of that is locally/Texas brewed. Philistine that I am, I asked my server for the most macro-like brew on the menu on my recent visit. She politely steered me towards Real Ale’s crisp, refreshing, and hoppy Hans Pilsner ($5) from Blanco, Tex.

The kitchen incorporates beer into some of the grub, too. You can practically get a buzz from the Rahr-infused cheese dip served alongside the massive jumbo pretzels ($7.50 for two). The salty treats are about the size of a Buick, and they have the soft airiness of a donut. Our server strongly recommended the pretzels, and so do I.

Neither the tangy Thai wings ($10.99) tossed in a sweet pepper sauce nor the blackened chicken quesadillas ($10.99) stuffed with sautéed bell peppers and onions and Jack cheese included beer, but both were solid bar food dishes.

If you like burgers, this place has them by the shovelful. There’s a Cajun burger, a Thai burger, a “Hopapeño Hop Fusion” burger topped with a fried egg and a jalapeño relish made with beer. I opted for the less adventurous but way more comforting-sounding smoked gouda burger ($12.99), served open-faced and slathered with smoky, creamy, rich gouda cheese sauce. The accompanying sliced potatoes looked like little mushroom caps and tasted like crispy, salty, pillowy potato wedges.

The perfectly flaky seafood on the Asian Ahi Sandwich ($13.99) was cooked a velvety medium and served with a twangy/sweet Asian slaw and a spicy “Bang Bang” sauce that tasted of Sriracha. It was served on a warm, porous ciabatta that allowed the sauce to seep into the bread’s chasms. It’s the sort of dish that I would ordinarily pair with a bright pinot noir, but Rahr & Sons Brewing Co.’s Pride of Texas Pale Ale ($6), with its honey and citrus notes, was a superb substitute.

Pouring Glory is set in a redeveloped standalone brick building on the developing end of the Near Southside, close to I-35. The surrounding roads look like Fallujah, but PF is like a little oasis. Really there’s nothing else exactly like in town –– it’s a brand of its own.