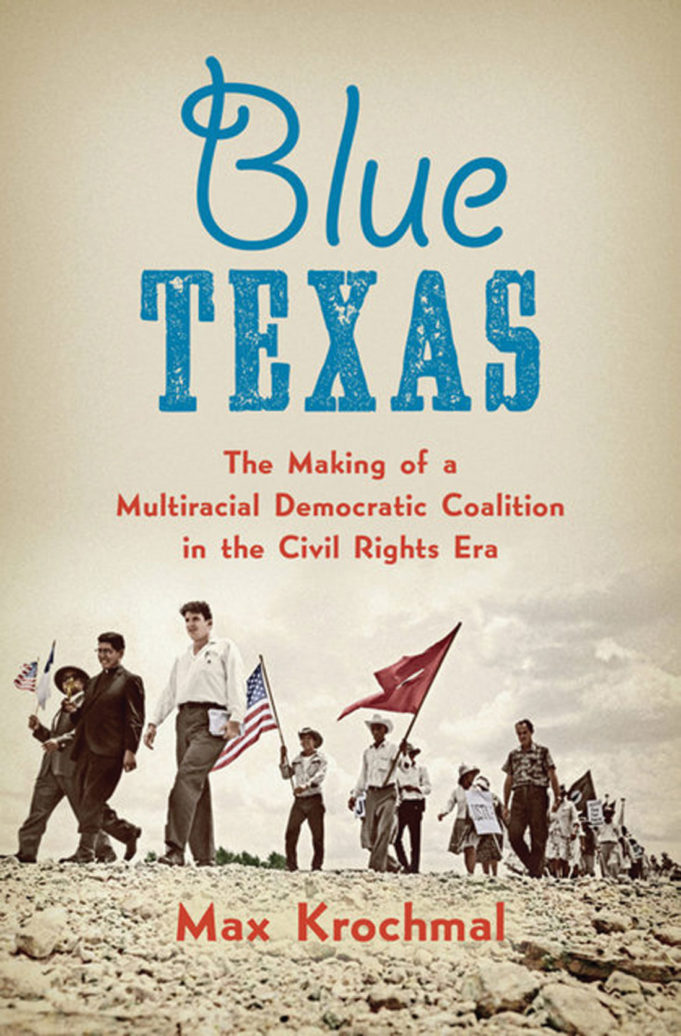 In light of lessons learned this political season, armchair analysts are reminded that change is a process, not a final destination. When in Texas, expect unnecessary detours if you’re Hispanic or African-American but take heart in the past efforts of 20th century civil rights activists, the focal point of Blue Texas: The Making of a Multiracial and Democratic Coalition in the Civil Rights Era. Written by TCU assistant professor of history Max Krochmal, the book recovers the untold stories of several notable activists, many of whom began their efforts in the 1930s, drawing their movements closer together until finally merging into a larger, more forceful coalition in the 1960s.

In the prologue, readers are reminded of the 1963 march on Washington before the story of another simultaneously occurring march is retold, one beginning in an all-black neighborhood on the east side of Austin. One by one, black and brown activists are depicted as they clamor for change and deliver speeches across the Lone Star State. By the end of this opening narrative, the “Establishment” has been outed for all of its hideous transgressions, letting the reader gaze up at the tall, thorny narrative arc of struggle soon to be climbed as we learn more about the “other Texas.”

With 10,000 pecan shellers on strike in San Antonio, the “People Are Power” chapter directs attention to a critical mass of “mexicano” protesters before panning over to an individual Yankee by the name of George P. Lambert. Krochmal moves the reader through Lambert’s coalitioning of labor activists in Dallas, even narrating a brutal tar-and-feathering incident Lambert was subjected to, compliments of thugs hired by the East Dallas Ford Motor Company. Later, he meets the love of his life, a church songbird who takes up the cause of activism apart from and alongside him while the two maintain a sexually open relationship. Although romance between activists is hardly a central theme in this volume, Krochmal narrates the political and amorous affairs of another activist couple, Moses LeRoy and his wife Erma Deloney LeRoy, who becomes the first African-American woman to seek election to the Texas Legislature and who held other elected positions in the Texas AFL-CIO.

By chapter two, a fuller view of black activism takes shape as Krochmal introduces other activists, such as Heman Sweatt and attorney W.J. Durham. If each chapter carries the weight of several political lessons, the second chapter reminds readers that collective bargaining and union organization were once the most effective tools for protecting paid laborers, with roughly 20 percent of nonagricultural laborers belonging to unions in Texas in 1955.

Most of the early chapters are grounded in the 1930s to sketch the development of seemingly disparate movements. Midway through the book, the stories circle and spin closer together until a midcentury coalescence emerges, blurring the racial and geographical differences between black and brown activists as several movements join into a singular, more powerful coalition. For the contemporary grassroots activist, these pages supply supple ground for planting old seeds of thought into new movements.

What’s refreshing is that Krochmal goes out of his way to mention and sometimes feature the stories of activist women, including Dolores Huerta, who was the National Farm Workers Association’s second-in-command to César Chávez. Huerta’s legacy isn’t detailed much, however, only alluded to in the epilogue of the book, which artfully connects nearly every labor movement in Texas by discussing “The Multiracial Marcha” that reflects present-day America’s strong affinity for identity politics. What is missing from the book is a thorough treatment of activists affiliated with the NWFA — presently known as the United Farm Workers of America. Historians of labor activism, especially in Texas, may be more familiar with strikes and protests organized within the agricultural sector, but non-experts need look elsewhere for stories and strategies of the NWFA. Contrarily, for those well-versed in agricultural activism, this book is a springboard for sharing new and desperately needed information. Bubbling over with long-forgotten names, events, and facts, this archive of Texas history will be dog-eared in advance and in hindsight of many elections to come.

Blue Texas: The Making of a Multiracial and Democratic Coalition in the Civil Rights Era, by Dr. Max Krochmal
$39.95
560 pps.