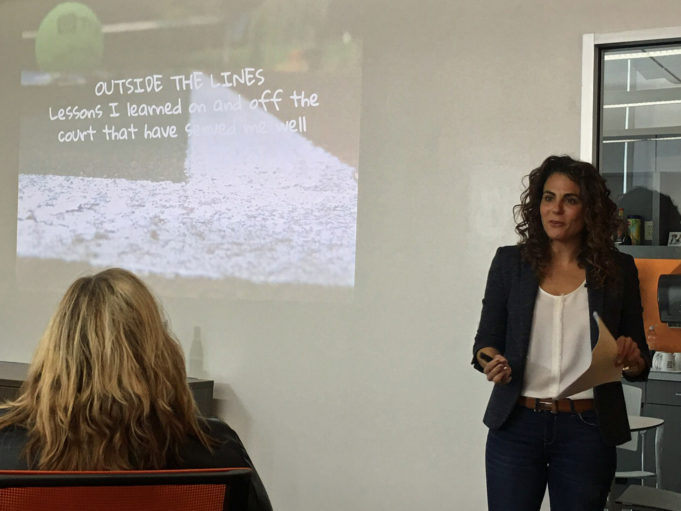 When you scored a touchdown for your peewee football team or converted a penalty in the high school soccer playoffs or legged out an infield single in beer league softball, you helped your sports team win. But how did that sport help you?

My entire family has long held a belief, shared by many in the athletic profession and beyond, that playing sports confers benefits far beyond the enjoyment one receives during the game itself. A recent speech by a sports professional reminded me why.

Regular readers of this blog, such as there are, may have noticed that I sometimes write about sports industry events at which I work, many of them charity-related. When I do, it is usually because Carla Rosenberg brought me in to assist her through her company, Matchpoint.

Ms. Rosenberg is a superstar in the charity event field. I keep working for her because she is one of those rare people who can see the big picture while also remaining mindful of the thousands of details executing a substantial gathering requires. Plus, she’s a genuinely nice person who can apparently put up with me.

She also knows the sports business, which makes sense when you know her background. She and I met when we both worked for the Texas Rangers. Before that, she played collegiate tennis for the University of Illinois after emigrating from South Africa where she was a top-flight junior player. Following the Rangers, she went on to a successful stint running the Dallas Stars Foundation. Now she organizes events and/or operates foundations for the likes of Marty Turco, Nancy Lieberman, Dirk Nowitzki, and others.

Something got Rosenberg to the point where she is this successful, and it was clearly either in spite of sports or because of them. In a recent talk she gave to employees at the North Texas Food Bank, she explained the role sports, and especially tennis, played in her development as an executive.

“The tangibles that come through playing athletics stay with you,” she said. She turned those tangibles into a series of philosophies she finds crucial to success.

She started with “Understanding winning & losing,” with an emphasis on the latter.

“The biggest lesson that I’ve actually learned is not from winning. It’s from losing. I’ve lost tennis matches. I’ve made mistakes at events and I just realized I can’t stay down.”

Her point was that losing happens in life as well as sports, and experiences on the field or court teach one to deal with it.

One thing I enjoy about working with Ms. Rosenberg is that she aims to leave as little to chance as possible. Rosenberg says she prepares for every meeting, conference call, and event because it causes her to feel the same assuredness she did when she played.

“When I used to step out on the court, I felt very confident. I felt like that was my safe haven. I felt very secure and I think it was because of all the practice and all the training and all the repetition that allowed me to feel that way.”

It’s nice to go into an event feeling comfortable, thinking we’ve got everything ready to go. Live events, however, sometimes take detours one could never anticipate. Technical issues, no-show celebrities, last-minute auction additions – one has to know how to deal with the unpredictable.

“Playing tennis in real time, under high-pressure situations, you have to make decisions,” she said.

We hear analysts talk about “going for shots.” One has to be decisive and execute with confidence, relying on the technique one has refined in practice. It works the same way in events, where having a clear idea of what is supposed to happen and why helps you find alternative solutions when reality doesn’t follow the script.

Not that such situations don’t make one uneasy. But one of Rosenberg’s topic headings suggested “You grow the most when you are uncomfortable.”

“I’ll use tennis as the metaphor. When I had an injury, it wasn’t that I failed. I had an injury. It forced me to step back. When I got back out on the court, again, I was rejuvenated. I had a different perspective,” she noted. “Sometimes when you’re uncomfortable, it’s OK. It’s the growing time.”

Sports and business both have their bottom lines. One must grow to the point where one can win some games, sets, and matches. Rosenberg learned that lesson when she vacationed in South Africa during Illinois’ winter break her senior year instead of training. When she returned, her coach dropped her several slots in the team’s ranking, suggesting he would play her in the line 6 singles position. After a lengthy rant to her father, Mr. Rosenberg asked her if she were finished.

“He goes ‘win your matches and you’ll play number one again,’ and I learned that very quickly. Produce results and you don’t have to do the talking.”

Results matter in tennis, sales, and all other walks of life. It turns out style matters, too. I don’t mean fashion sense or decorating acumen, although Rosenberg has a flair for both. An organizer who manages live events must keep her cool when circumstances rejigger themselves without asking. Ms. Rosenberg always does. Her junior tennis coach taught her that lesson one day when she played less than her best and let it show. He told her “when I look over at your court, I shouldn’t know if you’re winning or losing. It’s called poise.”

A lot of times, a good coach makes the difference in how well sports’ lessons take root.

“I was very lucky,” Rosenberg said. “I had an incredible tennis coach. It wasn’t about being a champion tennis player. It was about what kind of person are you going to be.”

The North Texas Food Bank isn’t a sports organization, but they sought out a sports person to speak with them – to coach them. They did it because her athletic background had given her far more than knowledge of odd-man rushes and forehand technique. It had provided tools she could use to succeed in many areas of business and life. Sports does that.