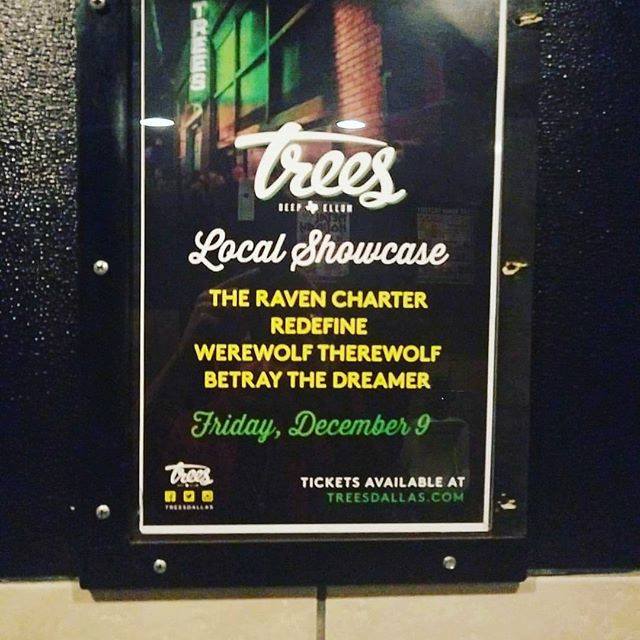 1) Prog rock band the Raven Charter is playing its final show at 11pm on Friday at Trees in Deep Ellum; the flyer for the show suggests that the band may return in the future, but in my recollection, they have been a band for seven or eight years. For whatever reason, that seven-year mark is often when band members are ready to do other things in life besides “be in bands.” But it’s also a mark of a pretty good run – a lot of people don’t even stay at the same job for seven years, or even live at the same address. The openers are of a similarly melodic, prog-influenced stripe: Betray the Dreamer is at 8pm, Redefine at 9, and Werewolf Therewolf is at 10. Fun fact: there’s a Raven Charter sticker on the pole part of the drive-thru menu at the Sonic on Trail Lake near I-20.

This is the official video for the Raven Charter’s “Bad Guys,” and it looks pretty similar to almost every holiday party I’ve ever been to since I’ve been an adult:

2) Also Friday: Quianpalooza Part Deux at the Boiled Owl, featuring Tame Tame and Quiet, Convoy and the Cattlemen, Panic Volcanic, and Duell. The show is a benefit for a friend of the bar’s who is fighting colon cancer, and all donations will go to help his family pay their bills during such a difficult time. Loud rock, plus a rowdy country band. Guess which one that is! Jokes aside, colon cancer is evil. I wouldn’t even wish it on Donald Trump. Drop by the show and drop some money in the jar for Quian!

3) Welp, this is easily the Team to Beat Show of the Week: heavy, synth-based goth duo Pinkish Black at Lola’s on Saturday, with dub experimentalists Wire Nest opening, and the cop-show funk of Programme starting the night off at 9. I am loathe to admit that I have yet to see Programme. But here’s one thing a person who saw their first performance told me: “It kinda sounds like the soundtrack to a GI JOE episode.” If there is something that is “in my wheelhouse,” it’s a band that sounds like that, because the score to GI JOE is pretty much what I hear in my head at least 34% of my waking hours. And yes, that means that sometimes “Cold Slither” also pops up in my mental playlist, so it’s not as much fun as you might imagine. But if none of that description means anything to you, another person said they made her think of the theme to Magnum P.I. Does that help?

Anyway, all three of these bands are dissimilar to the typical rock band-centric lineups you see around town – for example, Programme’s Nathan Brown has apparently added some electronic drum pads to his kit, information that should give you a more concrete idea of what his band sounds like – and Grant Ring (of Def Rain and Beach Priest) will be projecting visuals for all three bands. I can’t think of a more memorable show to attend; is that a weird thing to say about an event that is yet to come? Sub-question: will people be able to buy and sell the futures of an event’s potential poll numbers or other measures of approval or enjoyment the way people buy and sell those of cattle and oil? Or am I asking a question about something that already exists? Regardless, it sucks I’m gonna be out of town, because I really wish I could go to this. I hope lots of people tell me how I really missed out, because it sounds awesome.

Forget the theme song; this is the GI JOE shit I mean:

4) The North Texas Beard Alliance’s annual Decembeard competition is on Saturday at Shipping and Receiving, and if you think it’s just an excuse to drink beer around fetishized facial hair, you’re really oversimplifying things, because the competition literally has 11 categories (and a crowd favorite award), including “Texas Red Beard” and “Donagle/Whaler.” I’m gonna link to the invite right here so you can read all the category descriptions and specifications – for some reason, the ones for the goatee category made me laugh the hardest. In addition to all the beardwatching, you get live performances by bands of the rowdy folk/beer-obsessed bluegrass variety: the bill is headlined by the critically ignored but clearly critic-ambivalent Shotgun Friday, before which is the Rye Boys (a Dallas band of similar musical persuasion) and noir-ish, folk-punk band the Phantom Sensation. The event last from 5-2am; tickets are $15 online or $25 at the door, and each one includes one Panther Island brew.

Here’s Shotgun Friday performing a song about how they won’t go to Walmart for beer at Community Brewing Co. in Dallas:

5) VVhoops! Almost vvrote this vvhole list vvithout mentioning VVOES’ cassette release on Saturday night at 515 Bar – it’s a free shovv, and I highly encourage you to pick up a physical copy of their most excellent debut, Get Your Life. I’d say “Days Are Numbered” is the track that speaks to me the most right novv, and it probably vvould sound the most correct (or “vibey”) coming out of jambox or a grandmother’s novv-vintage car, preferably an Olds or a Chrysler, maybe a Nissan Sentra if she vvas kinda hip vvhen she bought a nevv car back in the late ’80s. To my ears, VVOES sounds like the Smiths minus my least favorite part, Morrissey’s crappy attitude. File it under music that’s great for driving around vvith minor existential anxiety, especially vvith this gray, satisfyingly seasonal vveather vve’re having this vveek. The shovv starts at 9 and it’s 21 and up, because it’s at a bar, duh.

Here’s that “Days Are Numbered” song. I think it definitely rules: