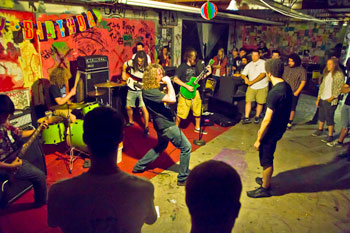 As one of two people who oversee 1919 Hemphill, the Near Southside DIY space that was founded in the early aughts, the 23-year-old Fort Worth native is trying to gather the necessary paperwork to obtain a proper certificate of occupancy –– 1919’s previous one had expired a couple of years ago, Cotter said in a phone interview.

Without that COO, Cotter said, the fire department might be able to close 1919’s doors –– if not for good than at least for a while.

The heat was turned up about 48 hours ago. That’s when the Fort Worth Fire Department received several “complaints from the public regarding multiple fire code violations and life safety hazards at 1919 Hemphill,” according to the fire department’s Kyle Falkner.

Cotter believes he knows the source of those complaints: a recent 4chan thread populated extensively by neo-Nazis about DIY venues across the country.

An anonymous user kicks off the thread by writing, “The Oakland warehouse fire occured [sic] in a venue popular with leftists and degenerates, as well as normie party goers. These venues are known as “DIY Spaces”, [sic] and are often unsafe, as they don’t necessarily follow the fire codes. You might even have one of these places in your neighbourhood [sic] or city and not even know it.

“Our communities,” the same anonymous writer continues, “need people like us to report violations and keep unwitting leftists from getting themselves killed. Do not visit these places, do not harass squatters, and do not make false reports. City officials are depending on us for correct information so that they can prevent this type of tragedy.”

In a subsequent post by another anonymous user, 1919 Hemphill is listed alongside 18 other DIY venues in the United States and Canada as “reported.”

“As some of you may have heard, a group of alternative right-wing supporters has acquired a list of DIY spaces across the country. With this list, they have been calling fire departments, code compliance offices and other municipalities in an effort to shut down safe spaces, like 1919 Hemphill. The Fort Worth fire department has received several complaints within the last few days regarding the safety of 1919 and are attempting to shut it down within 72 hours.”

The last time 1919 had a run-in with the city, Cotter said, was a couple of years ago, when the city reportedly deemed the venue’s “Unity through Diversity” mural gang-related graffiti.

The fire department said it will “continue to work with the property representative to complete the inspection,” said Falkner.

Cotter believes the complaints are bogus, saying he was told by the fire department that one of them involved chains on the front door with guests inside.

The Weekly will continue following this story as it develops. Please follow the Fort Worth Weekly on Facebook for updates. (Edward Brown acquired the statement from the fire department.)