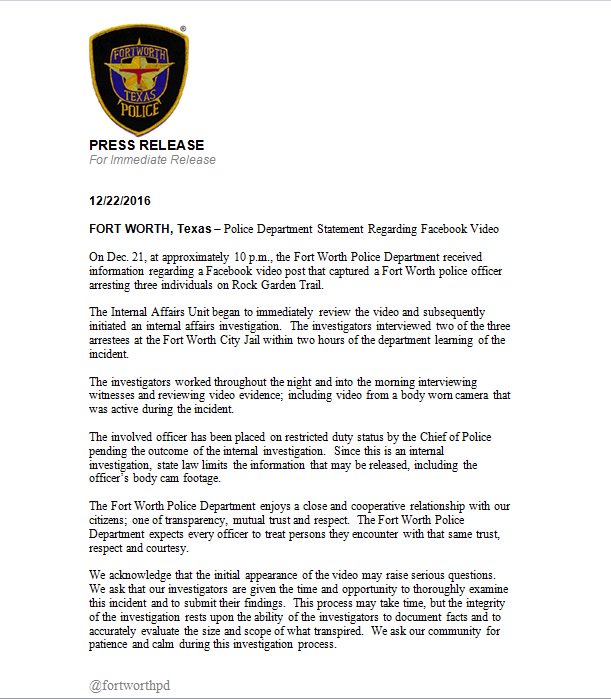 On our drive to preschool this morning, my son, seated behind me on the passenger side, asked me how we get in touch with the police.

“Yeah,” he said, gnawing on a piece of string cheese. “We need to call them and ask them about the rules.”

As brown suburbia unfolded around us, every lovely house a committee-approved hue of beige or maroon, each ornamental tree a nervous etching in black and brown, I immediately thought of the viral video I had seen yesterday. Yes, that one.

“They know all the rules,” my 5-year-old boy went on. “We need to ask the police about Daddy.”

My son likes talking about the police (yes, often in the car; yes, often with me). And the fire department and construction workers. Anyone with a cool uniform. He had not seen the video, and since he’s still an innocent, wonder-filled, believing-in-Santa child, he won’t see it for a very long time. My wife and I think WordGirl is a little too sassy and violent for him. We’re definitely not going to let him go near that footage of the African-American woman with her two African-American daughters and one white police officer going at one another in Fort Worth.

One of the women, 49-year-old Jacqueline Craig, had dialed 9-1-1 to complain about her neighbor, a white man who had allegedly grabbed her 7-year-old son by the neck.

“Well, why don’t you teach your son not to litter?”

That’s what the cop said to Craig. No, he wasn’t joking. You could even say he was blaming the child for being allegedly attacked by the adult.

The neighbor, Craig counters, “can’t prove to me that my son littered, but it doesn’t matter if [my son] did or didn’t. It doesn’t give [the neighbor] the right to put his hands on him.”

“Why not?” the officer replies coolly.

Though patently mishandled and though police officers are taught to de-escalate situations, at least not blame or antagonize victims, a lawyer for the Combined Law Enforcement Association of Texas, a 12,000-member police group, released a statement that can be seen only as inflammatory, considering that our white president-elect disavowed his relationship with white supremacists only last month.

“As has become the norm in our society,” says CLEAT’s Terry Daffron, “the video does not show the entire interaction between the officer and the individuals on the scene. … It is shameful that there is an immediate rush to judgment that my client is a racist cop simply because of the color of his skin.”

The racism claim notwithstanding, children should never be blamed for being abused by adults.

“I am confident,” the lawyer goes on, “that when all of the facts, evidence, and information come to light, it will present a different account of the events.”

In the video, the police officer and Craig continue arguing until he threatens to arrest her. Craig, still yelling, steps toward the officer, who steps forward himself. That’s when one of Craig’s daughters interjects herself between them. After a brief scuffle, arms and hands in a flurry, the camera shaking wildly, the officer takes Craig to the ground and handcuffs her. He also arrests the two daughters.

One of them, who has not been named because she’s a minor, was released the night of her arrest. Craig and her other daughter, 19-year-old Brea Hymond, were released yesterday on bond.

The officer, still unnamed, has been placed on restricted duty, according to a December 22 statement by the Fort Worth Police Department.

“We acknowledge that the initial appearance of the video may raise serious questions,” the department also says. “We ask our [internal] investigators are given the time and opportunity to thoroughly examine the incident and to submit their findings. … We ask our community for patience and calm during this investigation process.”

The officer’s bodycam footage, the department goes on to say, will not be released until after the investigation.

The neighbor was neither questioned nor detained.

“The police know all the rules.”

What does it say about cops and the perception of them by at least half of the country today when I can’t even agree with my son, my black son, when he says, “The police know all the rules”? When the thought of his calling the police – even for his own protection now – does not imbue me with complete confidence for his safety?

A child of the 1970s and ’80s, I have always respected first responders, especially police. One of my childhood friends became a cop in his 20s. He died several years ago in the line of duty, shot by a gun-nut with an assault rifle. (And why anyone other than a U.S. soldier or police officer needs an assault rifle is beyond me. In case the deer, feral hogs, and pheasant take up arms?) I hope my son grows up with the same kind of respect and admiration I had for cops when I was his age.

I also hope a billion dollars falls into my lap.

Along with staying on our son to be respectful (every second of every day), my wife and I can only teach him positivity. The old saying is that perspective is half the battle. A positive perspective leads to positive thoughts, feelings, and possibly circumstances. Of the perhaps thousands of interactions between white police officers and black citizens on Wednesday, only one (that we know of) went wrong. In that context, we have reason to be hopeful.

But what’s that old saying about bad apples and ruined bunches?

“Well,” I said to my son, pulling up in front of his school. “Anytime you have an emergency or think someone’s in trouble, you dial 9-1-1. Right away.”

I shifted my truck into park and walked around to his side. I scooped him up and held him tight. And then I looked him in his eyes.

“And then you call Mom and Dad.”