My editor is demanding an Off Asides column on the Super Bowl, but I have avoided all thoughts of football since the Dallas Cowboys lost their playoff game on January 15.  America’s Team ripped out my heart, spiked it into the turf, and permanently deflated it.

EDITOR: I know you don’t want to think about football. But the internet needs more stories, particularly football stories. Perform your lighthearted, scatological magic one more time for the world wide web, please!

OFF ASIDES: It’s painful and maddening to think about football. I’m in a dark place. I can’t be lighthearted.

EDITOR: Then, use the pain! Use the anger!

OFF ASIDES: Screw you, jerk! I hate the way you edit, the way your glasses slide down your stupid nose, and those pleated pants … .

EDITOR: Save it for the column, big guy. The column!

I reluctantly turn on the TV. Just seeing the pre-game guys discussing the New England Patriots and Atlanta Falcons makes me angry. The Cowboys could have beaten both these teams. 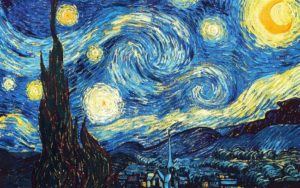 Jimmy Johnson is wearing a necktie that looks like, well; imagine if Vincent Van Gogh ate “Starry Night” after painting it — and then threw up on a tie.

All of the analysts are wearing gaudy ties.  When did a simple, red power tie go out of fashion? Now a tie has to say, “I’m powerful, creative, indie, hip, ironic, and narcissistic in a way that makes me seem mysterious and attractive rather than petty and self-absorbed.”

Gaudy ties are pissing me off. I don’t know why. I haven’t worn a necktie in 20 years.

An hour remains before game time. The Super Bowl is airing on FOX, a network so conservative that it has banned all regulatory oversight of its comedy writers. Viewers are forced to suffer through a horridly unfunny skit set to Garth Brooks’ “I’ve Got Friends in Low Places.” My eyes still hurt from seeing that.

Next up is a patriotic message set to Johnny Cash’s “Ragged Old Flag.” Pretty cool. It was good to hear Cash’s voice, and the message about loving America was tasteful.

Things go south quickly. I see something scrolling across the bottom of my TV screen that sends chills up my spine and makes my stomach turn: “Coming up next, Luke Bryan to sing the National Anthem.”

I call my editor.

OFF ASIDES: I’m begging you! Don’t make me watch this.

EDITOR: The internet is counting on you!

I take a stiff shot of bourbon to prepare for the auditory onslaught that is about to befall me.

“Please welcome four-time entertainer of the year and country music superstar Luke Bryan,” the announcer says. Bryan sings the anthem like a sad country ballad with a few hillbillyish vocal flourishes thrown in for bad measure. Lyrically, he replaces “dawn’s early light” with “drankin’ margaritas in my ol’ pickup truck” but nobody notices because six U.S. Air Force Thunderbird jets fly overhead. Everyone in the stadium waves American flags and screams. Vice President Mike Pence is in the crowd. He’s either a football fan or just looking for errant Muslims and Mexicans to evict.

Then, a Navy seaman rolls out the head of the Bush political dynasty, former President George H.W. Bush, who is sitting in a wheelchair and waving to a standing ovation.The crowd is going wild. I’m not sure if we’re here for a football game or to invade the Persian Gulf. All this rah-rah nationalism is making me uncomfortable.

The game hasn’t even started and I already hate neckties and America. Thanks FOX.

The contest is being played in Houston at NRG Stadium, where Fort Worth celeb-chef Grady Spears handles food preparations. I imagine Earl Campbell and Mary Lou Retton sitting in a luxury suite eating chicken-fried platypus bills with sweet potato soufflé and scorpion gravy.

Watching a football game without caring who wins seems pointless. I decide to root for the Falcons. My reasoning: Atlanta is closer to Texas; Patriots coach Bill Belichick is an asshat; it feels good to root for an underdog; Pats QB Tom Brady has multiple Super Bowl rings and a supermodel wife, so let’s spread the wealth; I love the song “Georgia” by Ray Charles but hearing Reba McEntire sing “Whoever’s in New England” makes me want to pour scorpion gravy into my ears while clubbing baby seals.

Finally, the game begins. It couldn’t be more of a yawner. The teams punt back and forth for the first quarter without scoring. President Trump is probably tweeting something to the effect of, “Super Bowl is a boring disaster. Bush but no Trump? Huge ratings mistake. #iwilldestroyNFL.”

The commercials haven’t been noteworthy. The T-Mobile ad that features Justin Bieber, Terrell Owens, and Rob Gronkowski is even more regretful on screen than it must have been on paper. Who signed off on this crap? Somebody paid $5 million per 30 seconds and shelled out tens of millions of more dollars for the Beebs and Gronkowski. (Owens appeared in the commercial for $248, the exact amount he owes the electric company to get his power turned back on.) All of this money could have been better spent on saving baby seals.

The Falcons take a 7-0 lead in the second quarter. That’s my team. Yay. I haven’t been this excited since a minute ago when I realized there was one pork rind left in a bag I thought was empty. I make one last attempt to ditch this column.

OFF ASIDES: C’mon, the internet doesn’t need this kind of negativity. Can’t I just stop now?

OFF ASIDES: You have a pretty mouth.

EDITOR: Save it for the column, buddy!

The Falcons take a 14-0 lead, but I’m no longer rooting for them. The game analysts say that no team has ever come back from a 14-point deficit to win a Super Bowl. That makes the Pats the underdog. I’m rooting for them now, although I wish the Falcons well because all we really need is love.

I’m reminded of that great philosopher, Rayna James’ oldest daughter, Maddie, on Nashville, who was talking the other night about how people are like little worlds unto themselves and stuff, and everyone is, like, all moving and growing and searching for connection amid the chaos. She is really smart for a fictional character on a low-rated TV show.

I want to give the world a hug.

The Falcons intercept Brady and return it for a touchdown to take a 21-0 lead in the second quarter. Looks like a blowout.

The halftime performance by Lady Gaga is the best since Prince’s 2007 show. She gives a couple of subtle yet classy nods to American patriotism herself, such as singing part of “This Land is Your Land,” a song Woody Guthrie penned decades ago to voice his displeasure with oppression and the growing separation of the rich and poor in America.

A few years ago, I couldn’t have imagined using “subtle” and “classy” to describe Gaga.

Anyone else remember the meat dress?

We love you Gaga!

And then it happens. The power of all this positive thinking floods the universe. The Pats stage the biggest turnaround in Super Bowl history, score 25 unanswered points, tie the game at 28-28, and then win it in overtime.

It’s the damndest thing I’ve ever seen. I plan to channel this positivity into my Off Asides columns next year to push the Cowboys all the way to the Super Bowl.

I love you all! #grouphugs4life