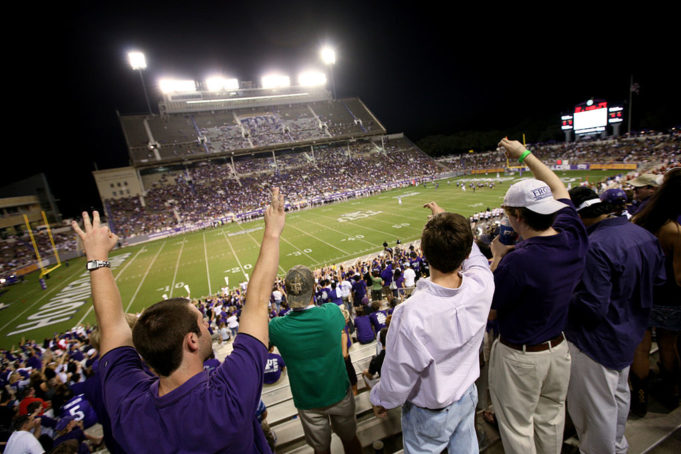 Fort Worth teems with good people. I was born and raised in Cowtown and can’t imagine a more warm-hearted bunch of folks.

Persons of quality character – like the ones in Funkytown – can often resist the temptation to compromise their morals for the sake of worldly gain. It’s best if they don’t have to, though. A little over 20 years ago, circumstances kept a group of locals from having to make some choices that certain neighbors of ours haven’t handled well.

You’ve perhaps followed recent developments in Baylor football. Over the last year, an apparent pattern of widespread misconduct in the supervision of the football program has led to personnel changes and lawsuits. The most recent allegations, if true, illuminate a culture in which conscience seemed to have had no place in the discussion. They also indicate that such attitudes were held by top school administrators, coaches, boosters, and even local law enforcement personnel. The ethically indifferent approach seems to have facilitated sexual assaults and other offensive crimes.

Make no mistake, we’re talking about serious charges. This is not buying a bus ticket for a player to go see his family for the holidays. This isn’t even letting him drive a free Lexus. This is actual criminal activity.

Some people’s jobs depended on football success. The boosters may have done it for the chance to feel reflected glory from a school they used to attend. They all allegedly decided those rewards outweighed any potential long-term repercussions or personal sense of shame.

The Waco university has experienced scandal before. In 2003, a former Baylor basketball player killed a teammate. A corrupt coach tried to use the murder to help him cover up NCAA violations. In 2012, both the men’s and women’s basketball programs received sanctions from the governing body.

The Baylor Bears compete in the Big 12 conference, one of the country’s top five Division 1 athletic conferences. Since its formation, the league’s schools have won national titles in 17 different sports (including two by Baylor in women’s hoops). Competing for such stakes intensifies the pressure to win. It also boosts the potential reward for boosters’ egos and staffers’ career paths.

So how does all of this concern TCU and nice Fort Worth people? Well, Baylor got into the Big 12 in large part because TCU did not. That happened back in 1996 and at the time caused a great deal of local upset. TCU trudged off to the Western Athletic Conference, then Conference USA and the Mountain West before recently winding up in the conference that had shut them out before.

Over those years, TCU kept a lower profile than its neighbor 90 minutes to the south. That had to be frustrating for Frog fans, but not competing against the UTs, A&Ms, and Techs in high-stakes matchups also kept it out of emotionally-charged rivalries with those huge taxpayer-financed institutions. Horned Frogs didn’t have to hear from Longhorns or Aggies about getting trounced year after year in the marquee sports like Bears supporters did.

I think that was a good thing for TCU. If they had been the lone private school to get into the Big 12, they would have had to endure the heightened expectations of trying to compete as the smallest member of the conference against subsidized rivals – as Baylor did. Less pressure means less incentive to find a way to work around the rules, be they ones of athletic associations or common decency. The Frogs have gradually built up some remarkable football achievements in the Franchione/Patterson era with a sparse record of disciplinary hiccups.

As noted earlier, Fort Worth is full of good people. The Horned Frogs might well have avoided a moral crisis no matter what conference they occupied the last 20-odd years. We do, however, have to keep in mind what happened to bring about the demise of the league they had joined in 1923.

The Southwest Conference collapsed in part because of the prestige its members lost due to widespread NCAA violations. TCU had its own 1980s transgressions, thanks to boosters paying student-athletes behind coach Jim Wacker’s back. But it’s another Christian school that might provide the best cautionary note. Southern Methodist’s delinquent culture didn’t result in criminal charges, but they did implicate the governor of Texas (Bill Clements) and the sanctions they received forced the cancellation of two full football seasons – the death penalty.  Incidentally, the Mustangs’ men’s basketball coach for much of that era was found to have committed multiple violations at the school in his sport in the 1980s. Dave Bliss repeated that modus operandi when he coached Baylor in the early 2000s, culminating with his appalling approach to a homicide.

TCU doesn’t have to repeat past errors, whether their own or someone else’s. Hopefully for the Frogs, those years away from competing with their bigger in-state rivals have helped the university establish a healthy atmosphere for its athletic programs. Now that they are once again facing top-level foes in the Big 12, they will need it.