I notice that only one week after Toni Erdmann opened in Dallas theaters, it’s already closing down there this weekend. This is despite the German film being a front-runner for the Best Foreign Film Oscar and making numerous critics’ year-end Top 10 lists, including mine. Still, I can’t say I’m completely surprised. A three-hour German comedy doesn’t appeal to many people, and one that’s hard to categorize or even adequately describe is a particularly hard sell.

I’m gonna try anyway, because it’s playing at the Modern Art Museum of Fort Worth this weekend, and because I’m so sure that the recently announced Hollywood remake with Jack Nicholson and Kristen Wiig is going to suck and suck hard, and because I have such an abiding affection for this piece of hilarious weirdness.

As many people have noticed, including me, the movie doesn’t sound that good in a plot summary. Peter Simonischek stars as Winfried Conradi, a divorced music teacher puttering toward retirement in the city of Aachen. We first see him playing a prank on a package delivery guy (Niels Bormann) by putting on a bad hairpiece and joke teeth and identifying himself as a mail bomber named “Toni Erdmann.” When his ancient dog finally dies, Winfried decides to surprise his only daughter Ines (Sandra Hüller) by visiting her in Bucharest where she works. The trip is a disaster, as the ultra-serious Ines is so consumed by her job as a corporate consultant that she has no time for him. That’s when Toni takes on a life of his own, driving around Romania in a Hummer limo, sitting on whoopee cushions in public, and introducing himself to Ines’ friends and colleagues as either the German ambassador, a private venture capitalist, or the personal life coach to real-life tennis player-turned-billionaire business mogul Ion Țiriac.

You’ll likely be surprised how much of this movie is in English, the language that the German and Romanian characters use to communicate with each other. That’s probably one reason why people found an American remake so easy to imagine, but writer-director Maren Ade keeps the tone drier than dry, with no background music and frequently no cues as to how we’re supposed to take the havoc that Toni is wreaking on Ines’ structured-to-death life. The 40-year-old Ade has long been an up-and-coming talent; this is only her third feature film as a director, though she has kept busy as a movie producer. She showed great promise in her last movie, 2009’s relationship drama Everyone Else, but here is where she attains true mastery as she couches Toni’s hijinks into larger stories about the sexism Ines deals with in her world and what globalization is doing to Romania’s oil business.

The movie’s capaciousness doesn’t make it any less crazy. The script was reportedly inspired by Ade’s relationship with her own practical joke-loving father. There’s a celebrated climactic scene when Ines throws a party for her co-workers that leads to the madness in the photo that I chose to run with this article. The critics have also taken heavy notice of a scene just before when Papa essentially bullies his daughter into singing “Greatest Love of All” for a random Romanian family whom they’re visiting, and even though Ines is reluctant (and no one will mistake her singing for Whitney Houston’s), she still can’t help but throw herself into the song once she gets going. Ade never tells you outright, but you eventually realize that Toni Erdmann is simply Winfried’s way of trying to get through to his daughter and tell her not to lose sight of the little joys and laughs that give life its meaning.

Ade films it all with a lightness that makes the movie wear its 162-minute running time lightly and also makes it an antidote to the grim-faced films that tend to be nominated for the Best Foreign Film Oscar. Even so, the straight-faced presentation of all the gags will surely be hardest thing for any Hollywood filmmaker to duplicate, and it helps make Ines’ realization of what her father is trying to do so moving. Maybe Toni Erdmann won’t inspire you to party naked with your dad, but it’ll probably give you a deeper appreciation for his uncool sense of humor and his wishes for the best for you. 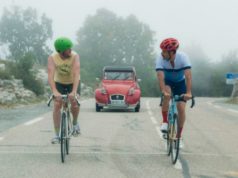 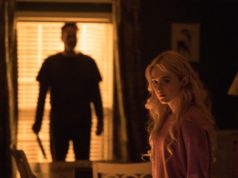