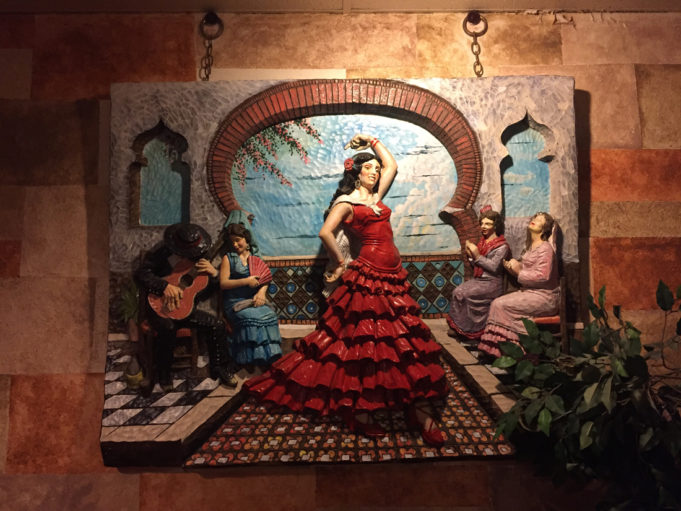 The Fort Worth foodie-verse turns into a frightening, dystopian hellscape south of I-20. There are exceptions (mostly near Hulen Mall and Bryant Irvin), but for most people living in those parts of the burgh, there aren’t many non-fast food or chain choices.

Part of my wasted youth was spent nosing around the southwestern part of this town near McCart Avenue, so I still try and pay attention to what’s going on over there. It’s not impressive, unless you like donuts. There are about 340,070 donut shops in the area. But if you know where to look, you can find some hidden gems.

Everything about the décor screams “Hey, this is a Mexican food restaurant,” down to the rustic-looking wooden booths and tables, brown tiled floor, framed works of art depicting various Mexican-y scenes, arched windows, and a 3D mural of a dancing woman wearing a red, ruffled dress.

The fare is all comfort with few frills, but everything was hot, fresh-tasting, insanely cheap, and delivered with a smile. On my recent lunch visit, my gooey cheese enchilada and pork tamale combo ($7.25) was topped with a carne sauce teeming with bits of meat that looked like man-kibble. The chicken on my guest’s fajita plate ($8.25) was juicy and tender, and the dish was served with a welcome, if bland, lunch-lady scoop of guacamole.

I’m not saying the place is a destination, but if you’re in the area…well, re-read the first paragraph. It’s worth your time and definitely worth the money.

If the ambiance of Mexican Real screams “Mexican Restaurant,” then Los Perez Mexican Restaurant (3702 Alta Mesa Blvd, 817-862-1150) conveys a distinct sense that you’re sitting in a room with tables and chairs. The blink-and-miss-it strip mall eatery trades in authentic Mex-Mex. Besides the telenovela blaring from the space’s TV, there’s not much else in the way of atmo. Ironically, even strangely, the lack of décor works in the joint’s favor. It tells a story of a poor immigrant family that probably doesn’t know much about the restaurant biz but really knows how to cook up some tender pastor.

Speaking of the marinated pork, Perez’s version was loaded with a tangy umami that would make a tonier chef jealous. I ordered the meat atop a hubcap-sized huarache ($8), with fresh avocado, lettuce, cilantro, white cheese, and a healthy zig-zag of crema all weighing down a masa cake that was both crispy and fluffy. When coated with the kitchen’s neon green, oh-so spicy salsa verde, the dish became something otherworldly. My guest’s carne tacos ($6) were of the standard-issue street variety, but like the pastor, the chuncks of beef had a flavorful, nuanced zing.

Perez’s may not be a culinary port of call, but if I lived down in that direction I’d be there all the time – when I’m not vaping donuts.