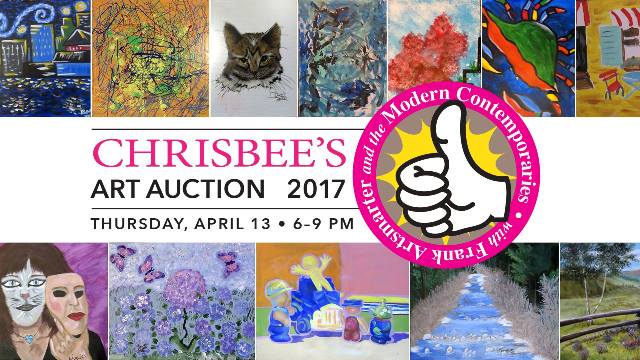 Think the music industry is crackers? You should see the art world, a bubble of myopia where people with more money than good sense blow enormous wads on pieces of pretty fabric or objects churned out in factories by interns simply because the names attached to those factories are famous. If you’re in a local band, try pricing your next album in the $800,000 range. You won’t sell a single copy. Unless the right art wacko comes along.

For Thursday, 8 bucks should suffice. That’s because multimedia artist and Weekly contributor Christopher Blay is hosting his 16th annual thrift art auction. From 6 to 9pm at Brik Venue (501 S Calhoun St), Chrisbee’s (a play on Sotheby’s and “Chris B.”) will be a cornucopia of “art” that Blay has salvaged from thrift stores all over — bidding starts at fiddy cent — and of sound. Rap-happy funk band the Rivercrest Yacht Club — “the pinnacle of irreverent kitsch-core,” Blay said — will go on at 8pm.

“With bawdy lyrics and ’80s nostalgia,” he continued, “they’re the best way to celebrate/take down the hyper-inflated art market that produced enough art-school art to fill all the local thrift stores.”

The thrift art auction, started to “keep working” when he wasn’t making art in his studio, Blay said, “came out of boredom and a need to question gallery/museum culture.”

Its longevity owes to a couple of factors, Blay said, namely a “growing group of enthusiastic followers” and a strong concept. The art, he said, “goes from a donated, valueless object to being arbitrarily valued at the donation center, only to return in front of an audience that reaffirms or collapses its value.”

Why the RYC is still around? Another strong concept. Along with a possible — possible — Christmas album, the sextet of rappers Heffminster de la Roca, Generic MC, and MCDJDDS with bassist LeeZurly, multi-instrumentalist Mars Trillion, and drummer The Rear Admiral is also considering dropping a live album. Generic believes that “nothing” on either of the RYC’s two studio efforts — the LPs Rivercrest Yacht Club or AquaNaughty — really represents what the RYC is all about: “our live sound,” he said, “which is way cooler than our recorded product.”

Time is a problem, though. “We’re all just busy with work, kids, other bands, and hard drinking,” he said. “It’s tough to get together.”

The band’s last show was in September. Its next after Chrisbee’s is Saturday, Apr 22, opening for funky punks Sally Majestic at Lola’s Saloon.

Admission to Chrisbee’s is free, but proceeds from the cash bar will benefit the Modern Contemporaries, a program by the Modern Art Museum of Fort Worth geared toward the under-40 crowd. (Contemporaries receive one complimentary drink ticket courtesy of The Usual.) Along with craft cocktails, beer, and wine, Chrisbee’s will have several food trucks (Alchemy Pops, Crazy Burger, Gepetto’s Pizza Truck, Luckybee Kitchen, and Sugar Biscuit). Seating is limited. Reservations are strongly encouraged. Please call 817-840-2115.

Like several previous Chrisbee’s, this one also has a “legit artist” component “in part to further that original impulse of institutional critique.” In one sense, Blay said, his collaboration with the Modern is his “jiu-jitsu to get art from thrift stores somewhat sanctioned by a museum, and on the other hand, it’s a way of engaging art patrons in a critique of the very highbrow patron-level society that they are a part of.”

The change, from thrift art auction to Chrisbees, was occasioned four years ago by a collaboration with Malcolm Warner, former director of the Kimbell Art Museum. “It was then,” Blay said, “when I decided to work with other artists who would make art, do video collaborations, or, in one case, make velvet paintings in the style of their own works. … After over a decade, I felt that the auction had fulfilled its purpose, which was to question the random value of art and to scrutinize art in a space other than a museum or gallery.”

Future Chrisbee’s “disruptive actions” include the two web series Artists in Bars Getting F#&&@d Up and Between Two Frames.