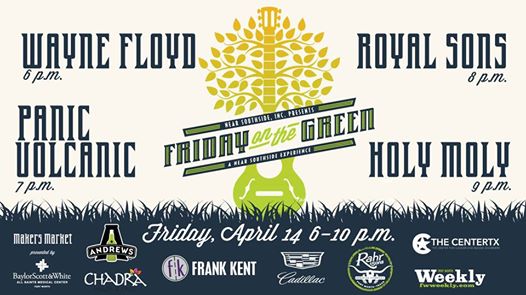 1) Friday night is the first Friday on the Green of the year, with four local acts to get you and the fam dancing in the vicinity of blankets and lawn chairs. The kickoff edition of the monthly free concert series is heavy on hard rock, as the middle acts are Panic Volcanic and Royal Sons at 7 and 8 respectively, while rowdy cowpunk mainstays Holy Moly headline. Songwriter Wayne Floyd opens the show at 6pm, so grab the kids and a spot on the lawn, and then leave them to their own devices while you go wait in line for beer and food truck food. If you’re new to Friday on the Green, it’s the big lawn at the between Lipscomb and Hemphill, north of Magnolia Avenue. You can’t miss it. This is a FW Weelky-brewed Friday on the Green promo from last year. Ah memories!

2) Division Brewing (506 E Main St) seems to be actively throwing their beer helmet into the local show ring, as they have another quality lineup Friday night, starring Trai Bo, Teenage Sexx, and Bomb Quixote. None of these bands sound like the other; I feel like Trai Bo’s sound probably changes subtly from show to show. Glad to see people around here making interesting music! Teenage Sexx is a reliably entertaining garage-psych band (that’s how I’d describe them anyway), and BQ offers tight grooves and party-oriented riffs – the kinda shit you wanna hear when you’re drinking pints of beer in Arlington. Cover’s $5 and it’s 21+. Hey look! Here’s Teenage Sexx playing at Club Dada last year:

3) Saturday is Tax Day, but there’s also a good show at the Grotto (517 University) if you’re upset about footing the bill for Donald Trump to squeeze into his golf clothes for another weekend at Mar-a-Lago – some loud rock and whiskey shots oughta take your mind off King Con and his cadre of villains enjoying the Florida sun and playing “Missile Command.” Hard rock power trio Mean Motor Scooter headlines, with indie rockers Picnic, Lightning in the 11pm spot, the most excellently named pop punk band Basketball Shorts (from Austin) at 10pm, and Fun Button at 9pm. Fun Button are from Denton and remind me a little bit of the Crystal Skulls. Hope that clears things up for you. 21+, and cover is whatever they charge at the Grotto nowadays. In this video, Basketball Shorts appears to be playing at a San Marcos house party or outdoor stage at night. That sounds pretty fun to me, but you’ll have to go to the show and ask them if you want to know if it was a good time or a bad one:

4) The Sunshine Bar in Arlington’s modestly sized environs will thunder with volume on Saturday night: We Are the Asteroid (featuring former members of Ed Hall, Pain Teens, and the Butthole Surfers) headline a bill that’s rounded out with lots of other hard and heavy rock; Panic Volcanic, Huffer, and Bad Feeler are the opening acts. Cover’s usually something hella cheap here – either free or $5, so bring $5, because money tends to go farther at the ol’ Sunshine than a lot of other places anyway. Ever wondered what a show at Tomcats West is like? You could just go to one, you know. But here’s Huffer doing the heavy lifting for you:

5) And one more for Saturday: Republic Street Bar (201 E Hattie) has pysch-rock/shoegaze band Slumberbuzz (at 10pm), whose dreamy soundscapes will be enhanced in the outdoor setting of Republic Street’s patio stage. Smoke ’em if ya got ’em – 4/20 is a week away but that don’t mean you can’t get an early start! Also on this bill: the Velvederes in the headlining spot (at Republic Street, this means 11pm), and a band called Favor, which may or may not be bringing food. Bet they are sick of hearing that joke! Favor plays at 9. Show is free and 21+. If you’ve wondered what driving for Favor is like, here’s a video about it: