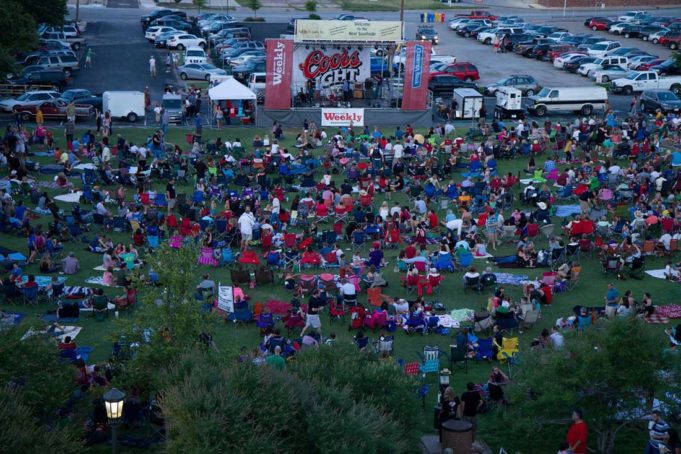 On Friday night, it occurred to me that festival season in Fort Worth is suddenly a much bigger deal these days. The Fortress Festival, Main Street Arts, Open Streets, May Fest and other such gatherings are all happening seemingly at once. This realization came at the kick-off for the Friday on the Green season down at Magnolia Green Park (1201 Lipscomb St). Instead of planning ahead, I tried to wrangle my group together via text message with vague directions like, “to the left of the lobster truck and the tree that looks like Iggy Pop with leaves on his head,” which, let’s face it, are all trees. Given that this is the start of summer, maybe I’m not the only one that isn’t up to speed yet on festival survival strategies. Here are some pro tips:

Do you have a flag? My former Austin roommate Hector once sewed the only two flags in the house together before Austin City Limits, and the Mexico/Great Britain “Brixican” flag proved a life-saving beacon while stumbling back from the beer tent. You should also try and snag one of those collapsible portable poles so you don’t block the view of people around you. After festival season is over, you can dramatically plant the flag in a neighbor’s yard on Columbus Day and claim their home and property as your own.

That’s gonna leave a mark.  Occasionally, your body may betray you and force you to tap out. At Friday on the Green last week, Chad Beck, guitarist for the Royal Sons, dislocated his knee on stage during the band’s first song. After the EMTs swooped in and slammed it back into place, he reportedly looked up at lead singer Blake Parish and valiantly declared he was ready for the show to go on. But by then, all the equipment was off stage. If any of your body parts are no longer in their correct working order, no one will begrudge you for heading home for a stiff drink and the RICE protocol.

Drunkarexia. Even though there were many food vendors at Friday on the Green, including The Beignet Bus, Holy Smokes BBQ, and Taco Heads, lines proved too long a wait for the modern drunk on the go. The beer and wine-only tents were faster, so many festival-goers opted for what my late father referred to as “hydraulic sandwiches.” Sure, you aren’t allowed to bring outside food and drink in, but the rules don’t extend to stuff already in your stomach. You need a base to absorb the coming deluge of alcohol so you don’t pass out cold. (I’m looking at you, man in the porkpie hat that used a toddler’s My Little Pony backpack as a pillow during Holy Moly’s set.)

Don’t spread out like the fallen-Roman Empire. Consider realistic needs when you pack a chair, a flag, dogs and cats, tiny humans, open liquids, duffle bags, coolers, a typewriter, back up knee-brace, your first-edition hardcover copy of Infinite Jest, a king-sized duvet with matching pillows, and a dust ruffle. Space was definitely at a premium in Magnolia Green Park the other evening, and good blanket forts make good party neighbors.

The rules of allowable items do alternate between festivals, so save yourself some frustration and check the website for restrictions and size requirements before the next Friday on the Green event on May 12, Main St. Fort Worth Arts Festival the weekend of Apr 20–23, and Fortress Fest on Apr 29-30. Obviously, there are other things you must bring that are not on this list, like sunscreen. But if you don’t know to wear sunscreen in Texas, then you deserve a hellacious burn, and I reserve the right to mock you in advance.

Shoot for the Moon