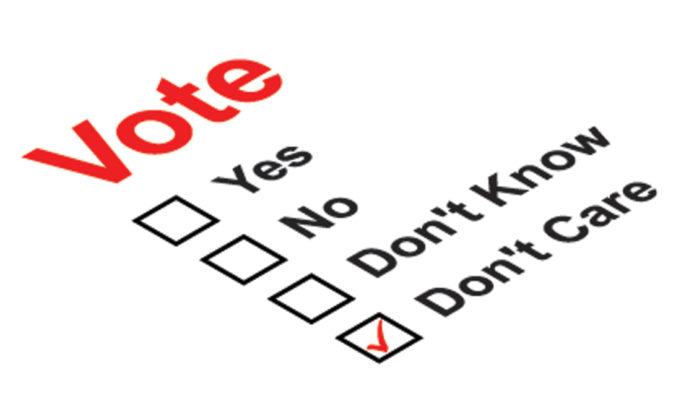 In a 2016 study on municipal voting, researchers at Portland State University analyzed the most recent mayoral elections in the country’s 50 biggest cities. What became clear is that many registered voters in many big cities have a case of the don’t-give-a-craps when it comes to voting for their mayors. Voter turnout nationwide is lower than a slug in a gopher hole but especially so in Texas. The good news is Fort Worth’s illustrious base of registered voters doesn’t suck the most. We’re No. 2 on the list of least interested voters. The most lethargic tools in the country are shuffling around and drooling in Dallas. Other Texas cities ranking in the Top 10 are San Antonio (No. 4) and El Paso (No. 5).

The Portland busybodies studied 23 million voting documents to determine that few people vote in mayoral elections and “those who do vote tend to be older and more affluent than the population at large and less likely to be people of color. This raises important questions about social justice and public policy related to local elections.”

The median voter age in Fort Worth, according to the study, was 66. And yet, the average age of Fort Worth residents registered to vote is 41. The takeaway is that Fort Worth residents, especially the younger ones, don’t really care who is mayor. Former Mayor Mike Moncrief could have remained in office forever, like a king, if he had wanted. It’s easy for someone with money to win an election when voter turnout is less than 7 percent. Hire some fancy campaign consultant, target a couple of thousand people whom you can count on to vote, send them glossy mailers (and a free sample of Dentu-Crème, apparently), and the next thing you know, you’ll be drinking champagne and writing ordinances to allow the oil and gas industry to turn everyone’s backyard into a sludge pit.

Experts trot out myriad reasons for low voter turnout. When things seem to be going well, voters stay home. No big issues? Why vote? Burned out on partisan bickering and lying politicians? Fuck it. Can’t decide whether to vote for Joe White Guy or Jane White Gal and don’t know anything about either candidate? Screw ’em.

Just think: If every registered voter turns out to cast a ballot in the local election on Saturday, May 6, our elected officials would better represent the diversity of our city and its 900,000 residents. The city’s racial composition, according to the 2010 U.S. Census, was whites at 42 percent, Hispanics at 34 percent, African-Americans at 19 percent, and Asians at about 4 percent. Minority populations are expected to continue expanding their numbers citywide and statewide for the foreseeable future.

Below are the candidates from which you will choose. Happy voting, you lousy bums.

As one of the fastest growing cities in the nation, Fort Worth faces growing pains. Overseeing policy, development, historic preservation, tax rates, and other important issues are the mayor and nine city councilmembers. All 10 serve two-year terms.

Mayor – Mayor Betsy Price is seeking her fourth term. So far, she’s done a pretty good job. Some people question her undying love of a downtown lake funded by taxpayers under the guise of flood control. And others fault her for allowing a California developer to renovate the Stockyards without allowing history-loving locals much leeway in shaping construction plans. Her vow to be reachable by the news media is not always the case. Sometimes she doesn’t return calls. But Price is inclusive and forward-thinking for the most part, and we love the bike lanes being implemented citywide. Chris Nettles, her opponent, is a first-timer to politics. The ordained minister, husband, and father of four is a Tarrant County court clerk, and his campaign is fueled primarily by anger in the African-American community over police relations.

District 2 – Current City Councilmember Sal Espino is stepping aside after serving six consecutive terms. He is endorsing Carlos Flores, a political newcomer, president of the North Side Neighborhood Association, and a Fort Worth Zoning Commission member. The race could be a nail biter. Steve Thornton, the retired Fort Worth firefighter who ran against and nearly unseated Espino two years ago, is taking another crack at it. Also running are Miguel “Tony” Perez, a realtor who volunteers for Code Blue, a citizen patrol program that works with the Fort Worth Police Department, and Jennifer Treviño, current president of the Hispanic Women’s Network and a community volunteer.

District 5 – Gyna Bivens, an advocate of minority representation in the managerial ranks of local businesses, is seeking her third consecutive term. Trying to unseat her is Bob Willoughby, a merchandising proprietor who lists zoning and code compliance reform as his top priorities.

District 6 – Retired Air Force officer Jungus Jordan has held the seat since 2005 and has focused on neighborhood quality of life, code enforcement, and infrastructure improvements. He is facing several opponents, including Paul. E. Hicks, who sought this seat eight years ago; Roderick Smith, whose areas of focus are homelessness, public safety, and economic development; and Nicholas St. John, a college physics student and, at 21, the youngest candidate running.

District 7 – Retired U.S. Army officer Dennis Shingleton has held the seat since 2011. He cites public safety and prudent fiscal management as his top concerns. Newcomer Michael Matos, who works as a project analyst, said his main concerns are flooding caused by inadequate drainage in Arlington Heights (a frequent complaint that the Weekly fields from locals) and the need for infrastructure improvements.

District 8 – Kelly Allen Gray has held the seat since 2012 and handily won reelection in 2015. Challenger Kevin Johnson, a social worker, said development has been slow under Gray’s leadership. Johnnie Sanders is a write-in candidate.

District 9 – Incumbent Ann Zadeh, an advocate of strong, safe neighborhoods, is seeking her second term. Zadeh has worked to improve walkability in her district that includes the up-and-coming Near Southside while fostering private-public partnerships. Ryan Place resident John Fitzgerald, an engineer, said Zadeh and the City Council are too pro-business and not responsive enough to concerns voiced by locals over drainage, a lack of meaningful public transportation options, and growth.

Fort Worth School Board

It’s been a rocky few years for this bunch. The attorney general and lieutenant governor came down on the district for its transgender student potty policies; a number of schools didn’t meet state testing standards; and bullying and cronyism have been major concerns for more than a decade.

Unlike most elected offices, the nine-member board of trustees tends to have some turnover, so don’t rubber-stamp these incumbents. Just four years ago, then-newcomer Ashley Paz narrowly defeated longtime trustee Juan Rangel. Now, Paz’s seat and three others are up for grabs on May 6.

T.A. Sims has represented District 4 since the Reagan administration, and he looks about as entrenched as a doughboy in a foxhole. His opponent, Johnny Cook-Muhammad, a 51-year-old program manager, has a couple of unique bullet-points on his resume –– he worked in the district as a custodian and cafeteria worker. But with only a little more than $500 in his war chest, Cook-Muhammad has raised less money than anyone else in the running.

Since 2004, realtor Norman Robbins has represented District 7 and was, for a time, the board’s president. The former Chamber of Commerce VP is facing a tough opponent in educator Michael Ryan. Though Ryan has never held office, he’s been on numerous boards, holds a doctorate in education, and has a combined 36 years of working in schools as a teacher, principal, and school administrator.

Trustee Matthew Avila isn’t running for re-election, and his District 8 seat appears to be a wide-open race between two political first-timers. Financial Executive Jason Brown has been publicly supportive of Superintendent Kent Scribner and openly critical of what he calls a historically dysfunctional board. His opponent, Anael Luebanos, is running on a promise to scrutinize the district’s budget. The 32-year-old is an accountant by trade.

District 9 incumbent Ashley Paz has become one of the board’s top policy hawks and one of Scribner’s strongest supporters. Paz’s opponent is the only challenger to have previously run for public office. Pilar Candia is currently the district director for District 2 of the Fort Worth City Council. In 2014, she also ran and lost an election for justice of the peace.

Five board members serving four-year terms lead this staggeringly powerful agency in charge of flood control and several reservoirs supplying the area with potable water. The board members have taken on even greater power in recent years – the water district has become a major player in land development such as the Trinity River Vision project in downtown Fort Worth.

Five candidates are seeking the three available at-large seats on the board. Board President Vic Henderson recently vacated his seat after 32 years.

Andra Beatty is a residential real estate broker and a frequent attendee at water board meetings. She is focused on water availability and flood risk management.

James Hill is a banker and member of Fort Worth’s zoning board of adjustments.

Leah King is a former nonprofit executive and a corporate public affairs officer.

Mary Kelleher was elected in 2013 after vowing to break up the good ’ol boy network that has long guided the agency with an unbending stranglehold and lack of transparency. She has done well in those efforts.

Jack Stevens is a retired engineer who has served on the board since 2004 and pushed for Trinity River Vision’s town lake development and a pipeline linking the district to Lake Palestine’s water supply.