For a guy who rejects organized religion but still believes in a higher power, Richard Hennessy credits a Bible verse his father often quoted as a big influence on his decision to spend his life making music.

Hennessy, the frontman for indie rockers Henry the Archer, said he interprets the passage from Ecclesiastes 9:10 – “Whatever your hand finds to do, do it with all your might” – as God’s recognition of the arts.

“That was always inspirational to me,” he said. “In hard times, I would always think about that.”

The New Jersey native is no stranger to hard times. He’s been playing as Henry the Archer, named after a character in a fictional medieval autobiography he was writing, in different forms since 2011. He’s moved around the country with the frequency of a military brat and taken the moniker with him from New Jersey to New York to Pennsylvania to Texas to Colorado and back to Texas, changing casts or playing solo acoustic gigs wherever he went.

Finally, he said, his perseverance has paid off. Last week, Hennessy, drummer Kevin Geist, and bassist Charles Marchbanks inked a deal with local label Hand Drawn Records. On Friday at Magnolia Motor Lounge, the trio is set to celebrate the release of its fourth album, Zero Is a Number. In a couple of months, the group will release the record on vinyl.

“From our end, it’s a big deal,” Hennessy said. “We’ll be able to play places we haven’t played and network with more people.

“Being on Hand Drawn isn’t just about Henry the Archer,” he continued. “It’s a reciprocating relationship. They support us. We support them and all of the bands on the label. It’s a real family atmosphere, which is cool and why we wanted to be a part of that.”

Hennessy, a data inventory manager by day, said that label rep John Snodgrass approached him after Henry the Archer played a Sofar Sounds show in Dallas, and the two emailed back and forth for a few months.

“I was blown away,” Snodgrass said. “Richard’s voice is an instrument. It ebbs and flows at a moment’s notice, which is really cool. The [band’s] sound had a little taste of reggae in it, and that was definitely something we didn’t have on our label.

“After the show, I immediately talked to my two partners about getting these guys on the label,” he said.

Henry the Archer’s sound is hard to pin down. It definitely lives on the indie-rock continuum, with thick slabs of reverb-soaked riffage and effects-laden guitar. The eight tracks on Zero Is a Number veer into reggae, piano pop, and prog. The sonic shifts aren’t so much meandering as they are playful zig-zags between genres that yo-yo back to rock.

Hennessy said he wasn’t trying to make each song on the record sound so different, but his songwriting is often the product of his mood, setting, and circumstances. For example, the record’s second song, “New Mexico,” an up-tempo jam with blues-swing underpinning, wasn’t written on guitar.

“I was camping in New Mexico and really dying to jam out,” he said. “I went down to a music store 20 miles away and bought a guitalele and started jamming on it.”

When Hennessy arrived in Fort Worth in 2013, he played a solo acoustic gig at The Grotto, where he caught the eye of then-promoter Aaron Knight of Blackbox. That evening, Knight made a social media post about the East Coast transplant who needed a backing band. Geist (Bindle, Analog Drift) was the first to respond, and the two connected over their shared funk background.

“In New Jersey,” Hennessy said, “I didn’t really grow up in a great neighborhood, and there was a lot of hip-hop playing in my school. I grew up in a gospel church, too. There was always funk involved.”

Geist brought in bassist and former Bindle bandmate Matt Hembree (Pablo & the Hemphill 7, Goodwin, Stoogephelia), who eventually left the band when he became the father of twins. Hennessy approached Marchbanks (Chingalotus, Chilamundo) about filling in, and he eventually became Henry the Archer’s full-time bassist.

Hennessy said that even though he writes the songs, his rhythm section has just as much to do with the band’s sound as he does.

“I come up with a full chorus and structure, then I bring it to a rehearsal and start jamming it with the guys,” he said. “My philosophy is,  ‘Who am I to tell the bass player what to play? Who am I to tell the drummer what cymbal to hit?’ That would take all of the joy out of it for them.

“Who would want to be in a band with some asshole telling them what to play all of the time?” 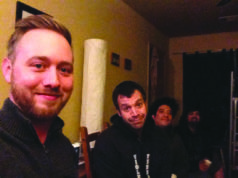 The Skeeves Sharpen their Tools

Things We Lost in the Mire