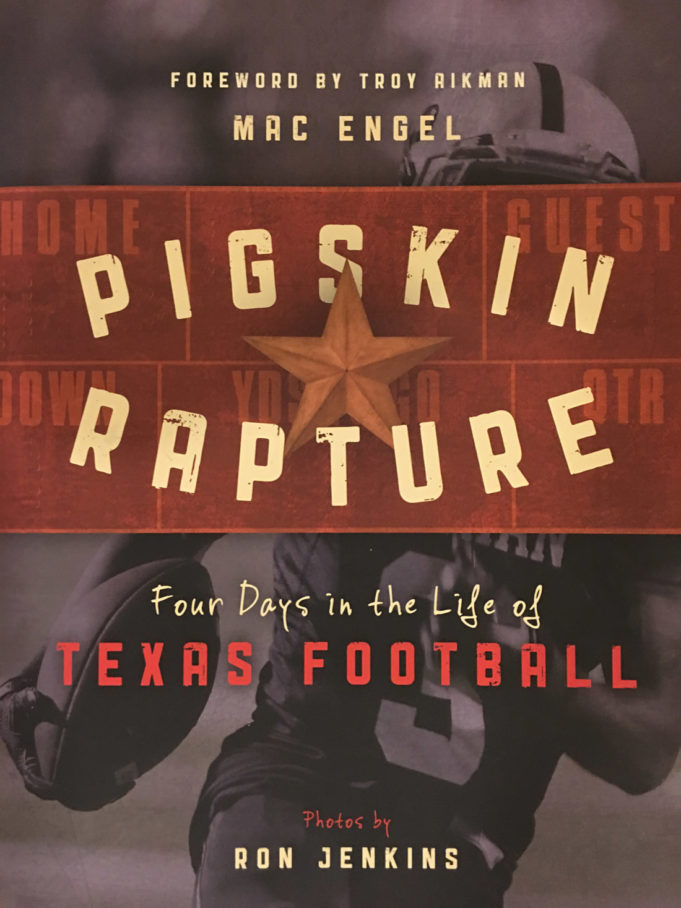 Texas has four seasons: winter, spring, summer, and football. In the midst of oppressive heat, Mac Engel’s Pigskin Rapture: Four Days in The Life of Texas Football reminds us of a not-too-distant future when the weather will not be the topic du jour. Football will.

There are shelves of books — heck, libraries of books — that offer insights into the constructs and characters of the sport, covering high school to professional levels. Pigskin Rapture is unique in wrapping all levels into a front seat, breakneck, sleepless journey of four games in four days with Star-Telegram sports writer Mac Engel and his photographer, Ron Jenkins.

The foreword is appropriately written by Dallas Cowboys legend and now NFL on FOX commentator Troy Aikman, who prepares the reader for what will be an unabashed celebration of Texas football culture and informs him or her that “Texas is football, and football is Texas.” Engel’s book is naturally divided into four quarters, each quarter representing a day on their trip, each centered on a game they attended.

“The First Quarter” starts on the morning of Thursday, Oct. 8, 2015, with the Houston Texans playing the Indianapolis Colts at Houston’s NRG stadium. Timestamps keep the reader informed as to where and when Engel is speaking, and Jenkins’ photojournalism does a masterful job of lending visual artifacts that build an immersive experience. Houston is the first opportunity for Engel to talk about how important football is to the fabric of Texas with an expose on the vacant and decaying Astrodome, an expansive building with no current purpose that Houston can’t bring itself to tear down for sentimental purposes.

Immediately apparent is that the book will be as much about Texas history and culture as football. Funny tidbits about lesser-known programs entertain the layman and add to the football trivia master’s repertoire, including the Rice University Marching Band calling its returning coach a “douchebag” over the public address system in 2007. Engel also visits Baytown Sterling High school and Houston Stratford (alma mater of Colts quarterback Andrew Luck), two schools on opposite ends of the financial spectrum that have little in common other than football.

“The Second Quarter” is anchored by Midland Lee High School and Odessa-Permian High School, the former the Alma mater of First Lady Laura Bush and the latter of Friday Night Lights book, television, and movie fame. Engel chronicles his time with the coaches from each school, speaking with local fans and proprietors of locally famous eateries. Jenkins’ photography is almost eerie when paired with Engel’s description of a region of Texas that lives and dies with fluctuations of crude oil prices. At the end of each chapter, a travelogue recaps the day’s movements. Like Day 2’s stop in Stanton, Texas, which was simply a result of Engel getting on Interstate 20 and going the wrong direction.

“The Third Quarter” showcases Oklahoma vs. Texas at the Cotton Bowl in the thick of the Texas State Fair. Engel lays the groundwork for the ridiculous traffic, spectacle, and food which fans and spectators would experience while attending this storied neutral-site game. When I interviewed him not too long ago, Engel admitted it was the only game that wasn’t kind of a dog, and he and Jenkins were very grateful for that emotional win to add actual on-field excitement to the book. Locals will be pleased at the mention of Engel’s crew watching TCU take on Kansas State University at Buffalo Bros later that night and his acknowledging the rebuilding of the school and athletics with a football-first approach. Each chapter includes a dining log with a nod to two local favorites from the locales of that day’s game. On Day 3, for example, he mentions Wingfield’s Breakfast & Burger in Dallas and Los Asaderos in the Stockyards.

By “The Fourth Quarter,” the New England Patriots are at the Dallas Cowboys, the most successful football team in the country taking on the most valuable football team in the country, respectively. Engel enters his comfort zone addressing the evolution of AT&T Stadium and its somewhat unusual commitment to housing and commissioning pieces of modern art. Jerry Jones is the focal point for much of this quarter, lovably and controversially. Jenkins gains the most intimate access to the stadium, allowed to take pictures from the Joneses’ Perch, an even more private box built on top of the owner’s suite, accessed from an elevator inside the suite. Jones’ wife admits that she has flown up to the Perch only once, and that was to console the owner after a Tony Romo injury.

Engel does an admirable job of toting the reader along his four-day odyssey, in which not everything is about football, but is somehow all connected by football. Engel was critical of his book when recanting that his travels seemed very mapped out when compiled but was somewhat haphazard and heavily dependent on Google Maps. At 227 pages, Pigskin Rapture reads quickly due to the liberal addition of images from Jenkins and his assistant, Michael Ainsworth. The book feels like a journey, with the introduction of colorful characters who you would otherwise never know — players, coaches, parents, fans, cheerleaders, and even band members. The individual stories and regional peculiarities render the football games borderline ancillary, with the circus around these match-ups making apparent why football is Texas and Texas is football.