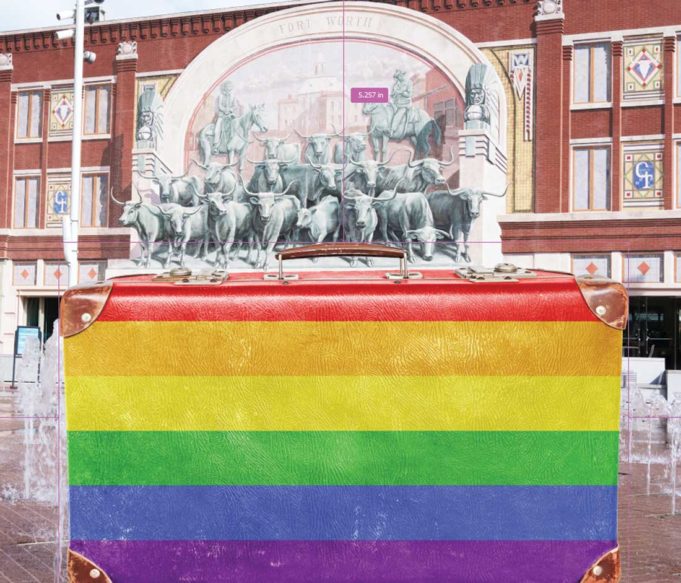 Just the idea of moving makes me nauseated. Oh, sure. It’s exciting and full of possibilities, rainbows, blue skies, and that grass that looks so much greener on the other side that it might as well be radioactive. However, the childhood fears that were so easily shoved to the back of my mind — “Will people like me?” “Will I find friends?” — came flooding back just as easily as they were forced away, making me realize they never were truly gone in the first place. So, yes, relocating to a new city is downright terrifying. When you’ve never moved outside of either your comfort zone or your hometown, and you’re moving by yourself, and you have a new job, the nausea comes pretty easily, too. Conflicting emotions can be a bitch, apparently.

Yet here I am, a new gay in a new (Cow-)town, ready to take on the world and shake my proverbial fist and shout, “Hell be damned!” to those ridiculous and pointless insecurities. Of course, the best way to drown out crippling self-doubt is with alcohol. So I set forth like an adventurer on the shores of a new land to discover the sights, sounds, smells, people, and nighttime places and spaces of this brave new world called Fort Worth.

What I found was worth the move, and that’s not just me sucking up to you. This city is supremely impressive. Having not really spent any time in Fort Worth since I was a child, I felt the amount of restoration and infrastructure improvements is immediately noticeable and no doubt appreciated. The old buildings-turned-retail and restaurants downtown are beautiful and seem to stretch for blocks and blocks. Everything is well-maintained and manicured, and the locals are friendly and fun. I decided that my new home is the step up from South Texas that I was looking for.

With that first glance, I was ready to delve into the local gay scene. My shopping list of questions was long, and I knew just where to start: fellow Fort Worth Weekly scribe and unofficial mayor of Gay Fort Worth, Todd Camp. He filled me in on nightlife destinations and acknowledged that locally, as with the overall national trend, Fort Worth’s LGBT community is now able to integrate relatively easily into mainstream society via gay-friendly bars such as the Chat Room Pub on West Magnolia.

Frank Provasek, a member of the board of directors with the Tarrant County Lesbian and Gay Alliance, quickly enrolled me in Local History 101 of the LGBT community, including Lt. Gov. Dan Patrick’s recent visit here to call for the local superintendent to be fired over his school district’s “bathroom policy of allowing trans members to access the bathroom that corresponds with their identity.” Paradise, unfortunately, is not without its warts.

My research complete, there was nothing left to do but explore the Fort Worth nightlife scene. Having previously visited Rainbow Lounge right before I moved to town, I was stunned to hear of its demise only a few short weeks later. Now that I was an official Fort Worthian, I felt obligated to drive by the charred remains, paying my respects at 10 miles an hour, taking heart in the recent news that the club plans to reopen in a few months at a new location. From there, it was on to Club Reflection, The 515 Bar, and Club Changes, all great holes in the wall to grab a cold one, nurse away the day’s worries, and catch up with friends. I noted Club Changes’ backroom stage, making a mental note to keep an eye out for future shows.

At The Urban Cowboy Saloon on Friday, resident drag performers Chanel LaMasters and Frida Monet were wrapping up a boisterous performance that sold me on a repeat visit. The crowd loved every minute of it, and when the show was over, a few headed out to the dance floor to bust a few fabulous moves of their own. Finally, I checked out 1851 Club in Arlington, where resident drag queen Kiana was having her birthday extravaganza.

So what’s missing from the Greater Fort Worth scene? Legit crowded dance clubs that play the anthems, y’all. Alas, South Texas is no different, and I had hoped for more options in my new city. Fort Worth alone had around 15 clubs in the 1970s and ’80s, and there were still a few around in the ’90s. The locals told me I’d find what I need in Dallas (Round-Up after midnight and S-4 got top recommendations), but there’s no reason Fort Worth can’t have this again, too. The dance clubs bring in the younger demographic, who were mostly missing from the Fort Worth bars when I visited (with the exception of Urban Cowboy). Fingers crossed that the new Rainbow Lounge hears my prayer.

Have other recommendations for me, nightlife or otherwise, in Fort Worth or the rest of North Texas? Am I off base on anything? Please leave your suggestions and comments on the Fort Worth Weekly’s social media pages and website, and I’ll be sure to check them out.