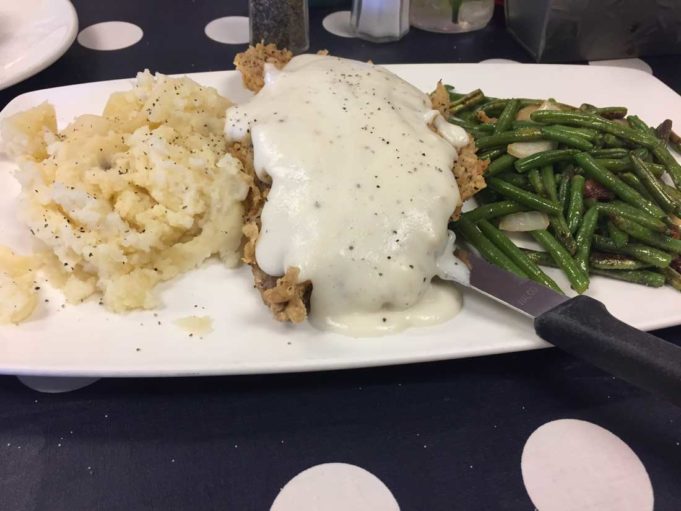 When you’re headed to a restaurant named Bacon’s, it’s easy to get carried away with what the bill of fare might include. I assumed the menu would be swine heavy and littered with gimmicky bacon-weaved baskets, bacon-infused everything, and bacon-crusted other meats. As our local archbishop in the crusade against bacon worship, I was ready to condemn the place before ever setting foot inside.

Although the bacon wave crested a few years back, hack chefs still use the pig part to cover up the fact that they can’t create flavors without culinary duct tape. For a while there, I couldn’t order a salad at most places without making sure there wasn’t bacon in it. Bacon beer, toothpaste, and novelty t-shirts exalting the pork product metastasized throughout pop culture. We were in a bacon world, and I felt like the lone voice asking, “Hey, what if we don’t put bacon in everything?”

So I huffed into Bacon’s Bistro and Café (714 Grapevine Hwy, Ste A, Hurst, 817-514-6301) bloated with piety, and I was happily disabused of my completely made-up bias. The menu of breakfast and lunch bistro cuisine wasn’t completely devoid of bacon – that would have been tragic. Rather, it had just the right amount, with nary a gimmick in sight.

The vibe of the stripmall eatery feels plucked out of a New Mexican suburb – it possesses all of the homey charm of a greasy spoon but without the crust and sass. There’s an almost upscale feel to the place, but it’s completely devoid of pretension – the polka-dot tablecloths, “Hey good lookin’, what you got cookin’?” sign, porcelain pigs, and other assorted bric-a-brac, along with the painted-green walls, comfy booths, and open kitchen, lent a kind of Michael’s MJ Designs chic to the dining room.

The chicken-fried steak was fork-tender, crispy, hot, and topped with a creamy pepper gravy. The side of chunky mashed potatoes tasted fresh but desperately needed salt and pepper. Not so for Bacon’s green beans, cooked with onions and, sigh, bacon. Delicio …. I mean … perfunctory, played-out bacon. The accompanying honey biscuit was a fluffy, butter sponge for the remaining gravy.

On the breakfast side, the smoked salmon eggs benedict was slathered in a gravy-thick hollandaise sauce, sat atop an English muffin, and was served alongside beautifully crispy shredded hash browns and cool fresh fruit.

If I had to nit-pick, my only complaint would be that our server had a tough time hiding her annoyance when we showed up half an hour before close (we didn’t realize the kitchen closed at 2pm) and couldn’t immediately figure out what to order. I tried to explain that we’d never been before and everything looked so good, but she didn’t stick around long enough to hear the end of that sentence. Still, she was polite and prompt, if curt, once we ordered.

Color me embarrassed for pre-judging the place. While my war on bacon still rages (in my head), Bacon’s is on my must-try list.