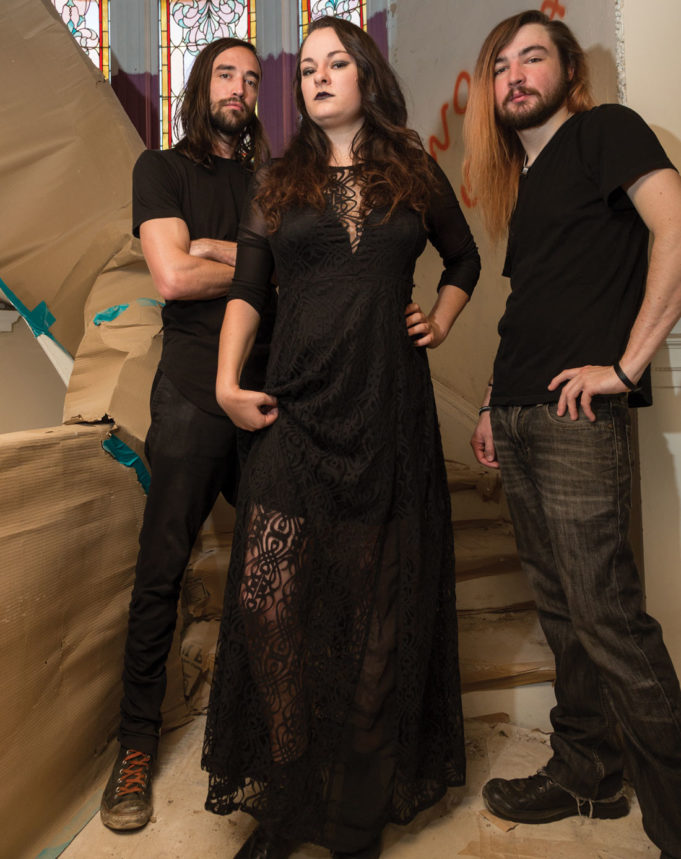 In 2015, I asked myself this question: What happened to Panic Volcanic? They’d gone from being a scrappy bass-drum-and-vocals power trio to a regular marquee name that could be counted on to regularly draw a good crowd. The following year, I hardly saw their name at all. For a popular local act, that kind of fizzling out was surprising. But two years later, Panic Volcanic is back and ready to rock with a new album and renewed vigor. In the words of frontwoman Ansley Dougherty, Panic Volcanic is “kind of a different band now.”

I recently met Dougherty and the band’s mononymous drummer Cole for coffee at Avoca on West Magnolia Avenue, a fitting location since Panic Volcanic’s existence is an outgrowth of coffee shop hangs. When Dougherty was in her teens, she sang as one half of the duo Mind Twins, along with Sealion bassist and Son of Stan keyboardist Sam Villavert. Mind Twins played at Buon Giorno Coffee in Grapevine every Tuesday night.

“It was this cute little duo, her and I, for a really long time,” Dougherty said. “There are still recordings of us out there on the internet.”

For a few shows, the duo expanded to include a friend who worked at Buon Giorno, bass player Zach Tucker. Mind Twins eventually split, but Dougherty’s introduction to Tucker would prove to be fortuitous. Tucker has laid down bass for Dead Vinyl, Animal Spirit, Roar Shack, Arenda Light, Bomb Quixote, and several others. But back then, he was part of social circle that centered on the coffee shop, along with Cole.

“That coffee shop is the only reason I’m even part of the band,” Cole said.

“I ended up playing based on what I knew from Rock Band [on Xbox] and our practices,” Cole said.

By then, Dougherty and Tucker had begun a new project. “They [had] started Panic, and I went up [to Buon Giorno] to get some coffee,” Cole said. “And they told me, ‘We have this new thing, and our drummer can’t really commit.’ And they were like, ‘You know how to play drums, right?’ ”

Cole worked at drums, and Panic Volcanic worked at getting gigs. By 2012, they’d become a regular fixture in local shows, and they decided to record an album, a process Dougherty describes as a “nightmare.” Granted, they were a young, inexperienced group, but their producer (whom Dougherty declines to name out of courtesy) had some personal issues that allegedly put him out of pocket for months at a time. They recorded nine songs in two days and then didn’t hear from him again for a long time, Dougherty said. When he did get back to them, she added, it was because he wanted to re-record what they’d done, thinking they could all do a better job.

“We did it all again, and then he disappeared for another three months,” Dougherty said.

The recordings were never released.

Panic Volcanic eventually recorded the songs again, this time with a more accessible producer, Ben Napier. Named Freak Fuzz, the 11-song album displays an outfit that had learned some lessons about performing and recording from their ordeal from the year before – over Tucker’s gritty riff, album midpoint “Evil Hand” opens with a line “My baby / He’s a liar / O2 for the fire,” and it’s easy to imagine that the song was maybe fired in their previous engineer’s direction.

Freak Fuzz came out in 2013, and Panic Volcanic made the local rounds. But their momentum began to flag after a couple years.

“We wanted to shop it around, but Zach was in five bands, and that made it kind of hard,” Dougherty said.

Though PV took some time off from playing shows, they weren’t entirely idle. During that period, they pieced together the material for its second album, recording it with sound engineer Brandon Lotspeich at Palmyra Studios in Palmer, Texas, last year. Tucker’s schedule settled down enough to give it a proper release, and Speak Your Evil debuts Friday at MASS, in a show that features famed local laserist “LaZer Ed” Hillers handling the visuals. Besides the lasers’ “ohhh shit!” factor, local comedy troupe Shut Up and Prance will be filming the show.

Dougherty said that Speak Your Evil is a response to watching some of her friends harm themselves with alcohol.

“I don’t want to give too much away, because I want people to listen to the songs,” she said. “But I was watching a lot of my friends struggle with addiction and alcohol abuse. I noticed that they were claiming it as part of their personalities, like it wasn’t something they could change. … I didn’t feel good about it. I didn’t want to see my friends ruin themselves. Speak your evil. Claim your demons, y’know?”

Sprinkled throughout the album are creepy samples from a woman known only as Yoli. According to Dougherty, Yoli was a mysterious woman who lost her mind through occult experimentation and documented her tribulation in a Dallas studio in the ’90s, which Lotspeich had previously stumbled upon.

“Her life had taken a turn into spiritual darkness,” Dougherty said. “It was witchcraft, Satanic rituals, drugs, and all this crazy stuff.”

Yoli’s scary ruminations over an out-of-tune piano contribute to the album’s ominous thematic menace. Dougherty said that Yoli ultimately escaped her immersion in evil by finding Jesus. That sort of renewal parallels the band in a way. Though Panic Volcanic isn’t exactly born again, they do feel reinvigorated.

“I feel like we’ve come a long way since the first record,” Dougherty said. “We’re better players and writers now.”