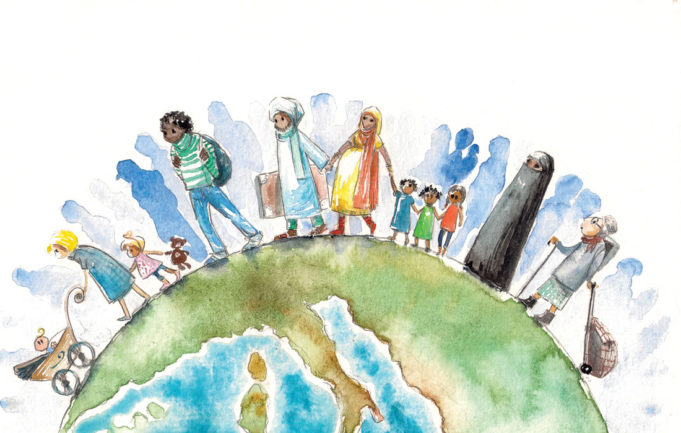 The federal government has until Sep 5 to phase out DACA, at least according to Texas Attorney General Ken Paxton and nine other state attorneys general (plus Iowa governor C.L. Otter) who are threatening to sue.

But this episode of Republican-on-Republican violence is like a fight over who gets to spank the kid first. We all know the Trump administration’s policies are anti-immigrant. What we didn’t know or perhaps realize until this point was the extent to which Austin and 10 other legislative backwaters will go to hurt the United States’ Mexican-American community.

Remember Jaime? He’s the young Fort Worthian brought to the United States by his family when he was in grade school whom we wrote about this summer (“The Long Road Here,” Jun 7). It was back in 2012 when Jaime applied for DACA, the Deferred Action for Childhood Arrivals program, an Obama executive order that allowed young men and women in similar situations to legally land a job, acquire a driver’s license, and go to school. DACA has never been a fast track to U.S. citizenship – rather, it’s intended to shield approved applicants (who must endure a rigorous screening process) from mass deportation. Jaime’s renewal for DACA is due in November. Naturally, he is concerned that the not-so-closeted racist in the White House will do away with the program, opening up its 788,000 permit holders – most who have known the United States as their only home – to deportation.

In his letter to U.S. Attorney General Jeff Sessions, Paxton wrote, “We respectfully request that the Secretary of Homeland Security phase out the DACA program. Just like DAPA, DACA unilaterally confers eligibility for work authorization and lawful presence without any statutory authorization from Congress.”

Paxton and his multi-state coalition want Secretary of Homeland Security Elaine Duke to rescind the 2012 DACA memorandum and to ensure that no new DACA permits are issued. The request also demands that no existing DACA permits (like Jaime’s) are renewed in the future. The request does not ask the federal government to remove any alien currently covered by DACA, nor does it ask the Trump administration to rescind DACA permits that have already been issued. However, it doesn’t take a genius to figure out that without the limited protection DACA confers on illegal immigrants, it might really mean mass deportation for a group of twentysomethings who had no choice about how or when they came to this country.

The Center for American Progress recently estimated that ending DACA would result in a loss of more than $460 billion from the national gross domestic product over the next decade. Ending DACA would also remove close to 700,000 workers from the nation’s economy. While it’s true that some of them perform highly skilled positions, many DACA-eligibles work in construction, landscaping, agriculture, or food. With approximately 108,000 DACA-protected workers, the Texas economy potentially stands to lose $6.3 million annually. Only California’s economy will lose more from the elimination of the DACA program –– an estimated $11.6 million.

The Texas attorney general’s challenge is based on the claim that DACA was an executive order and not a law. Shortly after the letter from the attorneys general went public, Senators Lindsey Graham (R-SC) and Dick Durbin (D-Ill.) filed DREAM Act legislation in Congress, citing “strong bipartisan support” for DACA-eligible youth brought here as children. The rebooted DREAM Act would not only be a Hail-Mary save for DACA, but it would create a path to permanent residency and citizenship. Durbin has been consistently proposing DREAM legislation since 2010. Ironically, Paxton’s challenge to Duke may end up forcing a vote for Congress to confer “statutory authorization” on the issue of young immigrants if this version becomes law.

Paxton’s office declined to comment when we asked about the potential hit to the state’s bottom line or the new DREAM Act, referring us to the press release issued by the agency on June 29.

Way not to go, Texas. Again.