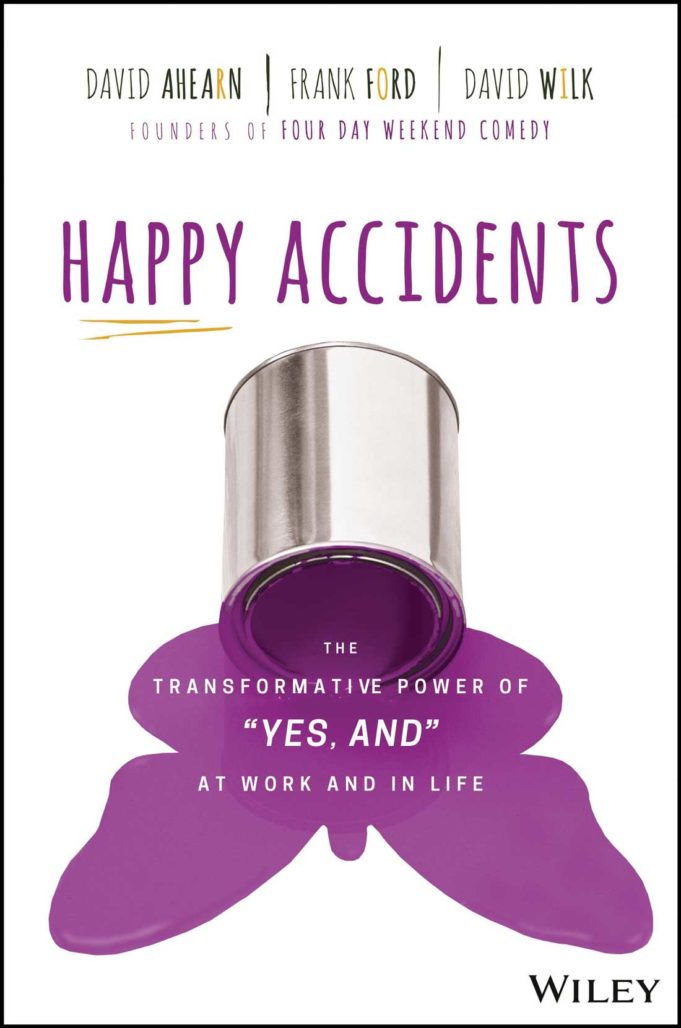 Wow, has Four Day Weekend really been around 20 years? Perennially rated by national critics as one of the top improv troupes in the country, Fort Worth’s longest-running comedy show has now entered a new phase: self-improvement literature. Three of the group’s founders – David Ahearn, Frank Ford, and David Wilk – have collaborated on Happy Accidents, a self-help book that teaches you how to change your way of thinking and achieve your dreams.

Long story short: In 1997, four out-of-work comedians turned a fledgling small business based on a six-week trial run of improv performances into one of the city’s most popular attractions. Along the way, they delivered a keynote address to Congress, performed for presidents George W. Bush and Barack Obama, entertained hundreds of Fortune 500 companies, received the key to the city, and, most recently, became Entrepreneurs-in-Residence at TCU’s prestigious Neely School of Business. According to the authors, all of those accomplishments were made possible by saying two words: “Yes, and.”

If you asked, “Yes, and what?,” then you are already primed to follow Happy Accidents’ advice into, well, happy accidents. Four Day Weekend’s basic idea for success is this: Instead of answering a question with “no” or “no, but,” say “yes, and.” By doing so, you are doing two things: practicing the underlying mechanic of improvisation and opening yourself up the universe’s infinite possibilities.

Stop me (or them) if you’ve heard this one before because the inspirational film and book The Secret served up these ideas in 2006. But who cares? The practical application of this is basically that whatever you are focused on, that’s what’s going to happen, so if you dream and think hard enough on something, you’ll find a way to make it happen.

Though the co-writers occasionally dive into some philosophically esoteric waters, they mostly focus on the positive outcomes from setting aside skepticism and playing along with the “yes, and” axiom. The chapters are short and cheerful and humorous (if not overwhelmingly funny), and each one ends with an easy exercise for you to try. A lot of the exercises are variations on “make a list of things you can say ‘yes, and’ to and log what happens,” but that doesn’t really detract from their effectiveness. The book finds different ways to repeat the theme that saying “no, but” provides you with a perception of control, while saying “yes, and” advances progress at the expense of control. The authors maintain that control doesn’t really matter because nobody knows what the future holds anyway. All you know is the past and the immediate present, beyond which a “kaleidoscope of ideas” swirls about like magical, cosmic dust, and this, as it happens, is what makes improv happen.

Seeing as how Four Day Weekend is a successful, long-running commercial endeavor, the book seems to be geared toward the corporate-minded – after all, much of their business outside Sundance Square involves performing for large companies, and much of their viewpoint revolves around setting aside your ego for the betterment of the group. But even on an individual level, their prescription for finding the opportunities in adversities is no less applicable. Still, those minds that are calcified against the barest shred of “positive thought” might find some of the verbiage eye-rollingly myopic. For those kinds of thinkers, the idea that there are no mistakes – only high and low percentage-of-success choices – may be tough to swallow, but setting aside one’s predisposed thought processes make such platitudes more palatable. Once you give in to assertions that “there are no bad ideas,” well, you sorta just did a “yes, and.”

Overall, Happy Accidents offers useful mantras that are designed to change one’s way of thinking to foment positive changes and paradigm shifts and not only weather crises but become stronger in their wake. Four Day Weekend fans expecting a read as side-splitting as their live show may be disappointed, but the book is by no means dull. And even when their advice sounds intuitive, obvious, or echoes other self-empowerment devices, it isn’t any less useful. Rather, the authors merely invite you to give it a try and pay attention to the outcome of your reaction. To use Four Day Weekend’s parlance, reading this book and following their “Yes, and” model for success is a “high percentage” choice.