If you’re like me, there was simply no easy way to do Gallery Night last Saturday. With nearly 20 participating galleries and almost as many unaffiliated spaces (not counting other, non-gallery spaces showing art that evening), there was just no way to cover them all. But the point of Gallery Night really isn’t going at a three-galleries-per-hour pace. It’s about getting to hang out with friends and meet artists. And eat all the cheese cubes and ranch-dipped celery sticks you can get your hands on and perhaps lift a glass or two (or seven) of boxed wine to the local 2017 art season.

Opting out of one of the smarter ways to gallery hop (party bus) for fear of losing the flexibility needed to bounce between galleries at my leisure, I filled up on newly, oddly expensive gas and rolled to William Campbell Contemporary Art first – I’ve discovered that the west to east route is the most efficient way of getting to as many galleries as possible. I would later head to Gallery 414, Fort Works Art (FWA), Fort Worth Contemporary Arts, and Artspace 111 before winding my way to Dallas to see Fort Worth’s Letitia Huckaby at Liliana Bloc Gallery and Casey Leone at The Reading Room. 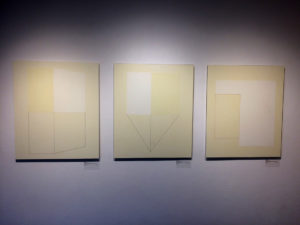 At Bill Campbell’s, Jeff Kellar’s Gravity + Light featured his “Winter Drawings.” Sparse pieces made with resin, clay, and pigment, on aluminum, they were really cold and formal. The geometric forms and muted, pale pigment were almost disturbing and eerie. There was no refuge in the triangles and rectangular spaces. A few of the other paintings and sculptures had hints of bold color in fields of pale. But if “Winter Drawing 12” were a space for solitude and meditation, you’d have to be there for a while. Minimalism is cold, y’all.

I headed back out into the September heat to Gallery 414 for Lee Hill’s Forged Paint, but after Kellar’s stark and rigid tableaux, maybe another room full of abstract formalism, even if it had more color, wasn’t the place to linger. With the engine running on this one, and after being politely scolded by gallery co-manager Adele Krause about not keeping up with her on Words with Friends, I ghosted and headed for FWA.

The crowds had not gotten there yet, which was great because I wanted to spend a little more time than usual there. Ben Willis’ Candy Man was a resin-dipped, candy-coated wonderland of color and confection. There was an impressively painted wall of candy cacti and crystal forms on pedestals, with a ubiquitous Dan Lam sculpture perched above a wall. As pop-y shows go, this one was a blast. 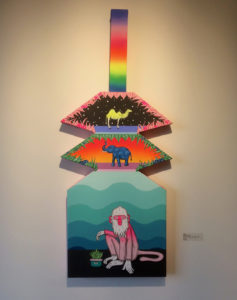 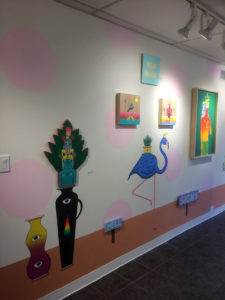 And I’m glad I went upstairs because I think owner Lauren Childs may have buried the lede here. Drigo’s kitschy, throwback-’80s paintings of Aztec and African masked figures nodding to Egyptology, lost civilizations, and mysticism were well worth the visit. If you’re a fan of Taco Bueno – or went to malls in the ’80s (we all did) – you’d stare at these paintings and wonder why you were so mesmerized. Then you would remember food courts and MTV and get the warm and fuzzies for those acid-washed jeans and bright-colored beachwear. And Miami Vice. The work was refreshingly playful and gave you the sense that Drigo’s connection to his paintings is unflappable. His sincerity makes them all the more endearing. 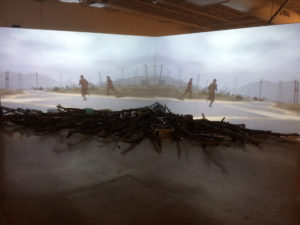 With time running out, I had to head to Finding Fanon at Fort Worth Contemporary Arts. The collaboration of London-based artists Larry Achiampong and David Blandy is one of many under-the-radar international exhibitions that curator Sara-Jayne Parsons- is bringing to the Fort. Finding Fanon is a series of films which deals with the works of Frantz Fanon, whose writings focused on “the psychological effects of colonization and the social and cultural consequences of decolonization.” In the spirit of full disclosure, I am the writer-in-residence at the Fort Worth Contemporary this fall, and I’ve been privy to the development of Finding Fanon. It was exciting to see it come to fruition.

In the main gallery, two walls come to an edge, where one of the four films in the show is projected. There is detritus strewn about (a mixture of e-waste and driftwood), which expands the celluloid space into three dimensions as the film rolls. This show had a density that is worth revisiting, and I knew I would have to return.

Parking was nearly impossible around Cydonia Gallery near West 7th Street, but I wanted to see Collective Show: Homecoming. Sadly, though, the actual HOMECOMING! Collective was not exhibiting here. Why this gallery would title a show with the same name as one of the most successful art collectives from Fort Worth is still very puzzling and not a good look, especially for a gallery that is trying to establish itself in the Fort. I’ll have to swing by before the exhibit comes down and see what’s really up.

So thanks to the lack of parking, it was on to Artspace 111 for John Hartley’s Once Upon a Time. The solo exhibit by one of Fort Worth’s best known photorealists was a series of paintings depicting collectible toys, which is instantly recognizable as his signature style: speeding racers, toy soldiers, and robot figurines, all painted larger-than-life on Hartley’s oversized canvases. The meticulous, ADD-type treatment given to every reflection, and every speck of rust and chipped paint, make them anything but playful. This is heady stuff here. John is Gepetto, bringing these toys to life, and we the Jiminy Crickets, blissful to be in their company. 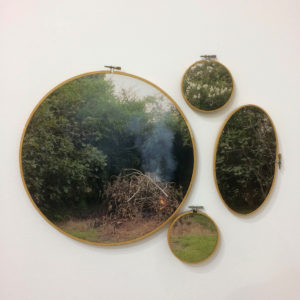 My final art-viewing push took me 35 miles east, to the old Industrial Boulevard district of West Dallas for Huckaby’s 40 Acres … Gumbo Ya-Ya: multiple photographic prints on silk fabric, framed with embroidery hoops and then assembled into collages on the gallery walls as single pieces. These fragile and haunting landscapes of rural Louisiana, Mississippi, and Texas weave both an autobiographical narrative steeped in ritual and tradition and a collective story of lost birthrights and broken promises in the land of the free. Huckaby’s frames here are a slight departure from the more traditional framing methods and devices she has used in the past, but the prints become even more engaging when seen in these tightly contained ovals.

The evening was winding down, giving me just enough time to drive to The Reading Room near Dallas’ Fair Park for only a peek of Leone’s solo exhibition. The series of photographs from which Goes to Washington is derived is a collection of screen shots (thousands of them, all from the Frank Capra movie Mr. Smith Goes to Washington) in which the main character, Mr. Jefferson Smith (Jimmy Stewart), has been redacted from the images and replaced with a red square. This essentially removes the one incorruptible character from the movie, leaving viewers to the mercy of unprincipled men. The black-and-white images almost read as campaign posters for truth or caution signposts for today’s sociopolitical highways.

My own highway was calling, and on my way back to Funkytown, I wish I’d been able to hit the Grackle, the Community Arts Center, and, on the East Side, McAnthony’s, but with the season just beginning, there will be more time. l