To enter these halls, a student has to be suspended or expelled from his or her regular Fort Worth public school for fighting, drug possession, or a felony charge, among other offenses. The kids, who are overwhelmingly underprivileged minorities from broken families, attend Metro Opportunity for 30, 45, or 90 days (depending on the severity of the offense) before returning to their home educational institution. Fort Worth police department officers keep a vigilant eye on the hallways during certain hours, and guests are often escorted by security officers, as I was a few weeks ago.

But once I reached Jo Dufo’s art class, the vibe began to change. 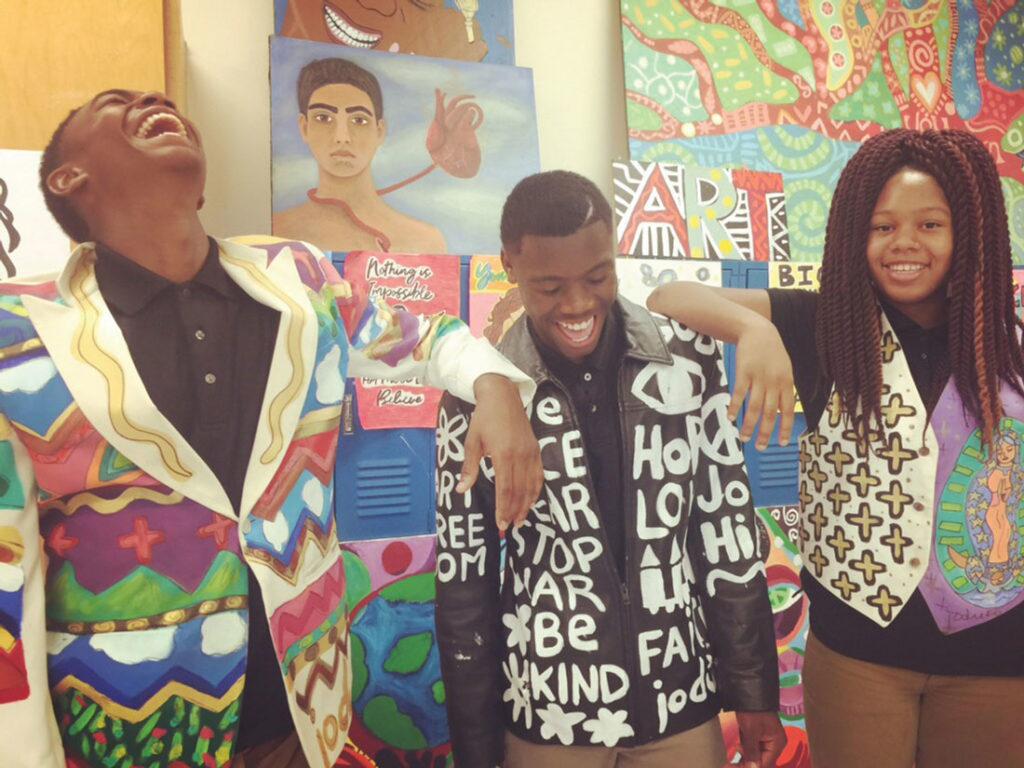 Her room was peaceful. Mellow East Indian music wafted through the air as I gazed at dozens of vibrantly colored paintings adorning the walls.

The paintings are part of a series project, Dufo told me. It’s called Stay Positive.

She pointed at several large canvases and sheets of paper hanging on the back wall. True to the name, the paintings and drawings had positive messages. A colorful headshot of rapper Tupac Shakur was bordered by the words “Keep Your Head Up.” His head is confidently cocked upward, his eyes gazing at the viewer. Dufo described the artworks as a “restorative project.”

Four kids, markers in hand, were bent over works on paper nearby. That’s when I met Nathan, a mild mannered 15-year-old African-American boy. When we chatted, he mentioned his excitement to see his father again – his dad had recently finished serving a 15-year prison sentence and was coming home soon.

“She changed my life,” he said, referring to Dufo. “I wasn’t on the right path.”

Nathan, Dufo said, helped develop Stay Positive. Each student is creating a handful of artworks that portray positive imagery and mottos. It’s not a puff project, Dufo said. Students are expected to think critically about everything, from the font and imagery they choose to the final color choices. The finished posters, Dufo said, will be professionally printed at the Fort Worth school district’s print department and displayed at area Boys and Girls Clubs and other venues. The idea, Dufo said, is to use her class’ uplifting message to inspire youths across the city.

Between drawing sessions, Dufo reminds each student of his or her self-worth. She said her room is a safe space, where students can talk openly to her about their problems. She calls her student chats “real talk,” because, she said, “if you can’t be real, then real change can’t happen.”

She paused to look around the room.

“Within each of you is a spirit so beautiful,” she said, looking at the group. “All I can do is love it.”

In 2000, after a 20-year career traveling the world painting murals and living off artwork sales, Dufo was asked to take on a unique project. Beverly Fletcher, Fort Worth school district visual arts director, was reintroducing art classes into the elementary grades after years of cuts to fine arts programming.

Dufo, Fletcher said, “is a positive person who exudes energy and pulls greatness out of people. I could just see her as an art teacher.”

Dufo wasn’t as sure. She had spent half her life as an untethered artist.

“I never wanted to be a teacher,” Dufo recalled. “I was too free-spirited.”

Fletcher convinced her to commit to one year, overseeing three schools for the pilot project.

“I went in there, and it was a match made in heaven,” Dufo said. “I didn’t have to pay for the room or supplies, and they fed me my clients. I could passionately take them on a journey. I didn’t look at them as children. We went on these creative projects, where these kids did college-level work. To me, if I can help bridge a relationship to what art can do for you, how it’s an extension of your ideas and interest, that’s what it’s about.”

In 2005, Dufo was awarded the Academic Chairs for Teaching Excellence, a prestigious performance-based honor given to one Fort Worth school district teacher per year.

Seven years ago, Fletcher again asked her friend to take on a challenge, this time directing the art program at Metro Opportunity High School.

During my visit, Principal Gerald Magin dispelled many of the stereotypes associated with his school.

“A lot of people have misconceptions about alternative schools,” said the former teacher and athletics coach of 38 years. “People think, ‘Oh, they’re fighting over there. The administrators are quasi-wardens.’ ”

The idea that a student can be punished into better behavior has long been disproven, he said. Many of his students arrive with behavioral problems and a predisposition for lashing out, but once they adjust to the programs at Metro Opportunity, he said, violence is almost never an issue. In addition to core classes, each student participates in restorative practices that engage him or her in discussions about their past and future goals.

On Mondays, all 50-plus students sit in a circle with Metro Opportunity’s 12 teachers and a handful of staffers. On Wednesdays and Fridays, the students break into smaller groups.

“We might ask, ‘What are you hopes, goals, and dreams, and how do you plan to get there?’ ” Magin said. “It can get pretty deep. You find out some of their parents are incarcerated or they passed away. As those layers are peeled back, you learn why they feel the way they feel.”

The practice teaches empathy and mutual respect, he continued.

“It doesn’t mean the students don’t get upset or the teachers don’t get frustrated from time to time,” he said. “But it’s real hard for teachers to throw a kid out once they know their struggles. And it’s hard for a kid to cuss out a classmate who cares about them and listened to their story.”

Magin hopes that one day, similar restorative practices will be employed across the Fort Worth school district.

In many ways, Metro Opportunity is ground zero in the effort to slow the school-to-prison pipeline that disproportionately affects poor and minority students. Research by Texas Appleseed, a nonprofit public-interest law center, has shown that suspensions are often the first disciplinary actions in a chain of events that ends with incarceration. Around 80 percent of adults in Texas prisons are high school dropouts, the nonprofit shows.

In 2014, the Texas Education Agency said that 13 percent of the Fort Worth school district’s black students received suspensions compared to only 5 percent of whites.

Back in the classroom, Dufo guided her students one by one.

“Tony, I want you to fill in that black area,” she said, pointing toward a black-and-white projection on the wall.

Then she turned to me.

“In kindergarten, we trace dots until we don’t have to have to use tracing paper,” she said. “I want them to see on their own. This is one of the steps. We start with tribal patterns, intricate patterns where they can develop an eye.”

Public school teachers are required to follow state-mandated guidelines, commonly referred to as Texas Essential Knowledge and Skills, but Dufo uses them as a point of departure into discussions of art movements and cultural identity.

“I’m not a popsicle stick and cotton ball-kinda art teacher,” she said with a laugh. “We’re going into expressionism and freestyle art. I’ve taken creative allowances my whole career.”

Once the young artists have created a quality body of work, Dufo uses her connections to put on student shows at professional galleries and art spaces. Past events have taken place at Dallas’ Ice House and Bath House cultural centers as well as local venues like the Rose Marine Theater.

A student named Thoal said Dufo gives her students the “confidence” to open up to her about personal problems as well as art-related questions.

“In regular schools, teachers don’t get to know you,” he said. “She gets to know us on a deeper, more personal level. She gives you the motivation to keep going. I feel like I can talk to her about anything. She talks to me like I’m a person, not just a student.”

Dufo then asked her students what they hoped to gain from Stay Positive.

“Christian, how would it make you feel if your poster motivated someone to make different choices?” she asked a young Hispanic boy.

“You have to love yourself first,” she said. “Lift your head up. You can do amazing things in this life. All you have to do is choose. Don’t let anybody label you.”

As she talked, each child gave Dufo his or her undivided attention.

“Never see yourself through the eyes of the world,” she said. “You may crawl, walk, or run. If you slip, be kind to yourself. Be kind. Always encourage yourself to become better. And you will be amazed at how far you will come. I love you, Christian.”

It was clear that the message was for everyone in the room.

“I love you too, miss,” Christian replied.

And with that, he turned his gaze back to his drawing and continued working.