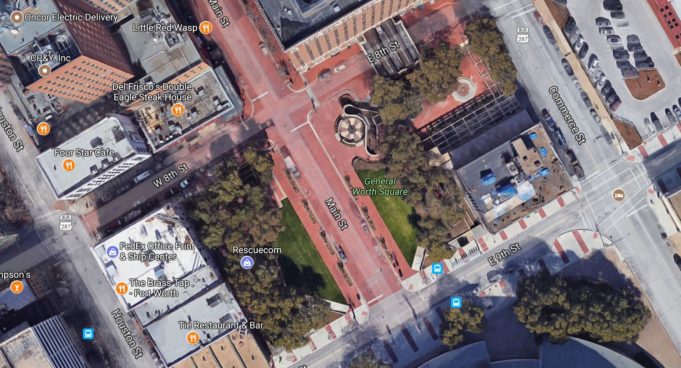 One aspect of being a writer covering the architecture and urban planning of Fort Worth is that from time to time I receive feedback from some of the people who are engaged on an official level with the development activity happening in Fort Worth. Such is the case with my recent piece comparing and contrasting Sundance Square Plaza and General Worth Square in downtown. The Weekly received the following letter from Andy Taft, the president of Downtown Fort Worth, Inc., and I thought it’d be worthwhile to share it:

The two spaces are profoundly different, of course.  One is a privately owned, developed and programmed plaza situated in the heart of the densest concentration of commercial activity in Fort Worth.   The other is a passive city park – not a plaza- located on the south end of main, across the street from a modestly used arena and surrounded by privately owned commercial buildings that orient away from the park.   While comparing the two spaces is like comparing apples to oranges, Buchanan’s broader point is well taken:  General Worth Square should have a brighter future.

That future is coming incrementally.  The JFK Tribute, developed by DFWI, has created a dignified activity point on the NW corner and Arcturis’ study suggests a wide range of future improvements.  Some modest and easy to implement, others more ambitious, requiring significant capital investment.

Some of the changes will happen as adjacent property owners and users rethink how they orient to the space and figure out ways to use it more to their benefit.  Others will come, hopefully, when the arena is removed and the Convention Center is expanded in its place.  The convention center expansion should include a thoughtful discussion of Main Street and General Worth Square and their roles as gateways and amenities to the center and downtown.

Until then, as land uses around General Worth Square change, new users will find new ways to enjoy the park.  Festivals will continue programming it and for the time being, the park will continue its traditional role in downtown.  The future, however, will see buildings opening to the park, potential redesign and a more elegant integration of the street into park function.

There are a lot of issues to discuss, many pieces that need to fall into place, and many dollars to find.  Until then, Buchanan’s observation that General Worth Square should play a larger role in the life of Fort Worth is top of mind and foundations are being laid to fulfill the park’s promise.

It’s encouraging to hear that downtown stakeholders recognize the shortcomings of General Worth Square. The lines between “park” and “plaza” in an urban context can become a bit blurry, but even something we think of as a park should be designed in such a way as to encourage engagement and activity with its surroundings.

It will be interesting to see how General Worth Square evolves over time, especially when taking into consideration the long-planned removal of the old Convention Center arena and its replacement with more exhibition space. The news that the park’s future involves more buildings opening up to the park should mean that one day General Worth Square won’t feel nearly as isolated from its context as it does now, giving Main Street a more interesting public space at its southern terminus than it has had in decades.

I look forward to seeing the evolution of General Worth Square, and thank Mr. Taft for reaching out to us.