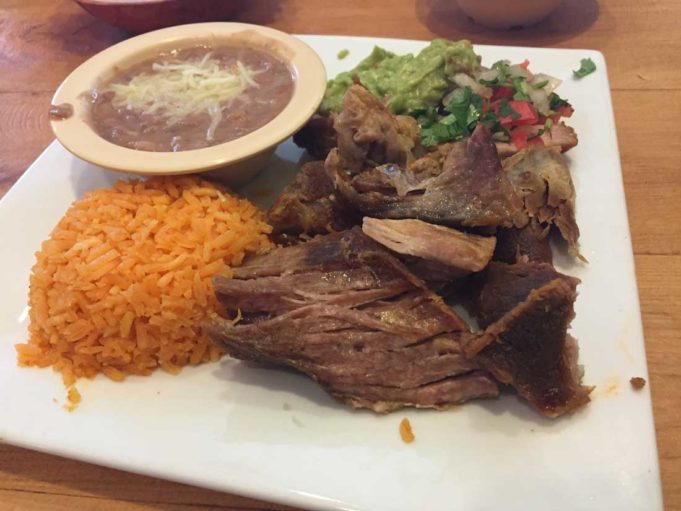 Maybe my inner Larry David is too caught up in various first-world malaise, but I can’t be the only one who resents restaurants that use valets, can I? I get it when the place is downtown or somewhere there’s little-to-no parking, but I don’t like seeing an empty lot and feeling coerced into paying someone $5 plus tip to readjust my mirrors for a 20-second drive. Clay Pigeon Food & Drink, Lonesome Dove Western Bistro, and Winslow’s Wine Café are just a few of the more prominent offenders –– I don’t even want to start on West 7th’s parking situation. Maybe the most confusing of them all is Chalio’s Mexican Restaurant (308 E Seminary Dr, 682-224-1244) near La Gran Plaza.

The narrow lot out front of the drab-looking brown building that faces a nearby gas station has about 20 parking spaces, which seems like more than enough –– though the interior is surprisingly expansive. As my guest and I pulled up, two valets were waving us over, which made us think using their services was mandatory. Had I been driving, I would have grumpily capitulated. Thankfully, I wasn’t behind the wheel, and my dining partner slid into an open spot without so much as a wave to our would-be hustlers. I didn’t look back. I imagine they were shaking their fists and wringing their hats a la Boss Hog.

Once I stopped kvetching and settled into the darkly colored dining room with ’70s-looking brown-tiled floors, large comfy booths, ample wooden tables, and festive streamers lining the ceiling, I was treated to one of the better Mex-Mex experiences I’ve had in a while.

The kitchen heaped hummocks of steaming, glistening food-chain subordinates into bowls and stuck them in front of me. I felt like a conquering Viking war hero devouring a tribute meal. The house carnitas ($7.95), pictured on the menu along with the other lunch specials in the kind of adorable low rez-style you often see at Mex-Mex places, could have solved world hunger by itself. The unctuous meat was a tad over-cooked on the edges. At least the middle parts of the heap were tender with a rich, developed flavor reminiscent of pot roast on steroids.

My guest’s bizarrely named green wet burrito ($6.25), also clumsily emblazoned on the laminated menu, was the size of a throw pillow slathered in salsa verde. The soft, elephant ear-sized flour tortilla was stuffed with beef, rice, and beans. Then I imagine a team of rope-pulling horses rolled up the giant. No one with a normal appetite should be able to finish that tasty monster and still walk upright –– except my guest did, and he claims to be just fine and dandy.

Speaking of pictures of food on menus, the house birria, a traditional meat dish served in meat juices and swimming in a piquant tomato-based sauce, landed its very own page and backstory. According to Chalio’s, its version is famous. This meatiest of meat dishes was served in a soulful, mildly spicy sauce of peppers, onions, and garlic that resembled a chunkier sofrito.

I needed a crane to leave that place. I sure wish we would have used the valet –– I couldn’t even walk to my car.