The carols. Colorful lights. Great food. Gifts. Cold weather. Laughter. And, best of all, seeing people I didn’t get to see very often. These were the things I loved most about Christmas when I was growing up.

And then things turned to shit.

By my 20s and 30s, I was guaranteed to be depressed for 48 hours beginning on the morning of Dec. 24 and lasting until at least midnight on the 25th. Why? Well, a big reason involved contracting genital herpes at about age 21 before much was known about the affliction, making it difficult for me to establish or maintain romantic relationships. I had lost my virginity a couple of years earlier and had been with several women by then but was still getting my sexual sea legs underneath me. While in college in the early 1980s, I met a young woman at a bar one night and recognized her from one of my classes. I bought us some drinks. We left the bar, went to my house, and climbed into bed. A few days later, I began itching in my privates. She hadn’t told me she was infected with genital herpes. I wouldn’t have known what it was anyway –– I’d never heard of such a thing and never known anyone who had contracted a sexually transmitted disease. The only ones I’d heard of were VD and gonorrhea. This was at the tail end of the so-called free love era that began 20 years earlier.

Not long afterward, my classmate dropped out of school. I never told her that she had infected me. I was too embarrassed to talk about my problem with anyone, even the person who gave it to me.

A doctor told me there was no cure or medicine to treat my frequent outbreaks. Also, the common thinking back then was that the virus could be passed to sexual partners even when no outbreak was occurring. The AIDS epidemic exploded onto the cultural scene in the mid-1980s, and people were terrified of STDs. I became a pariah self-medicated by booze, drugs, cigarettes, and food, a sad near-celibate baffling women, my friends, and relatives, who couldn’t understand why I had such trouble finding happiness with a woman. My appearance changed for the worse. I wasn’t strong enough or self-confident enough to tell anyone what was happening. I started to search Google for medical advice or maybe to join a forum, but then it dawned on me –– the internet hadn’t been invented! Everyone else and I were on our own, dealing with things our own way, feeling our way in the dark. I still fell in love and experienced wonderful moments when things were OK “down there.” But when they weren’t, which was often in those early years, I had to feign a bunch of headaches, so to speak, or, better yet, just get wasted and pass out. Secrecy and shame aren’t exactly the pillars of successful relationships. I became more of a loner, burying myself in my work and various writing projects to keep my mind occupied.

Shutting down my natural urges caused a lot of heartbreak. I wanted a wife and kids but couldn’t imagine anyone wanting a diseased STD carrier as a mate.

Christmas, as the holiday most geared toward family, is when the longing for a wife and kids would hit me the hardest. 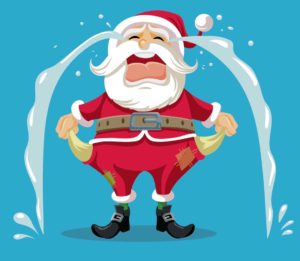 I buried my feelings way down deep, but they manifested themselves in another way. I became hypersensitive to insults, both real and perceived. The thing that ruined Christmas in my mind was the lack of basic courtesies shown during casual conversations.

Christmas meant catching up with relatives and old friends I hadn’t seen in a while. Some felt like they could say whatever they wanted as long as they had smiles on their faces.

“I should have bought you a gym membership instead of that gift card to Majestic Liquor. Ha!”

“Still not married yet? Is there something you need to tell us? Ha!”

“I bought you a shirt, but I can tell by looking at you that it’s going to be waaay too small. Ha!”

“You get uglier every year. Ha!”

Christmas changed from a happy time to a dreaded obligation because of all the insults disguised as small talk. Trading insults between close friends is all in good fun. But I don’t want to hear it at Christmas. I also don’t want to hear it five or 10 times in one day from people I don’t see very often.

Just because one of your parents is related to one of my parents and we share common blood doesn’t mean you have the lifetime right to say whatever stupid thing pops into your head upon seeing me. Just because we went to school together and had a few laughs doesn’t mean you should feel obligated to point out all the physical changes you’ve noticed after not seeing me for 20 years. If insulting someone is your only way of showing affection, learn some new ways.

People don’t want to take the time to shower and dress, buy presents, and drive somewhere to attend a gathering just to be verbally judged by almost everyone they see. Good-natured ribbing is meant in fun. I can laugh along as well as the next guy. To a point. It turns tiresome.

For me, dread and depression took the place of peace and joy. I didn’t fume only at the insults levied at me. I noticed other people fake-smiling their ways through painful exchanges.

One Christmas, I saw several adults laughing at their young niece, an 8-year-old who had put on weight and was having trouble climbing stairs. The girl looked different than the adults remembered from before, and they felt the need to joke about it to her face. Her rueful smile was the same one I would plaster on my own face in those situations. It was like the adults were saying, “Teasing is just another way of saying we love you! You fat-ass!”

Or this exchange between two of my relatives:

The first relative wasn’t aware that the second relative has a degenerative condition in his knees that is bowing his legs and putting him in great pain. Oh, well. He ought not walk funny if he doesn’t want to be mocked.

I never felt a desire to insult anyone in return, even though most of the wiseacres have plenty of their own flaws that could be pointed out. I refuse to play the game, a game that still goes on to this day. Usually I keep my mouth shut and try to take it with a grin, not willing to turn my Christmas into a bunch of back-and-forth name-calling disguised as “catching up” or “good-natured ribbing.”

Here’s a tip: Anyone who has developed mobility issues, remained single, gained weight, lost hair, become more wrinkled, or undergone other physical or mental changes since the last time you saw him or her is well aware of it. They don’t need you to go on record with your observations. They’d probably love to hear a kind word instead.

I realized after a few years that allowing myself to become depressed wasn’t the answer. Depression is forbidden at Christmas. Being unhappy upsets others. Ruins their holiday spirit. People expect you to buck up, show up, and take one for the team, even though you may just want to lock your door and disconnect your phone until Santa Claus is long gone.

In time, I learned to own my STD, to become honest with myself and others, thanks to Al Gore for inventing the internet. The www helped me realize how many others were infected.  TV commercials in the 1990s began marketing new medicines, making the virus seem less severe. Still, scientists haven’t found a cure. About one in six people between the ages of 18 and 49 currently has genital herpes, according to the Centers for Disease Control and Prevention.

I decided to take back my Christmases. Sometimes, in a calm voice, I let people know that nobody likes being judged and it might be best to keep their cracks to themselves. Or I walk away in mid-conversation. Judge me. I’m done talking to you.

The greatest defense is pure and simple. Just say something nice. If someone tells me I’m getting old/fat/lazy/dumb or whatever, I tell them they’re looking great and it’s really nice to see them. It surprises them, and they become more open to regular conversation rather than tediously insulting.

Nowadays, when I see someone I know whose face is broken out with acne, I say, “Merry Christmas! It’s really good to see you.”

If an old friend has gained 25 pounds and grew three chins, I say, “Merry Christmas! It’s really good to see you.”

It isn’t hard. I wish everyone would try it.