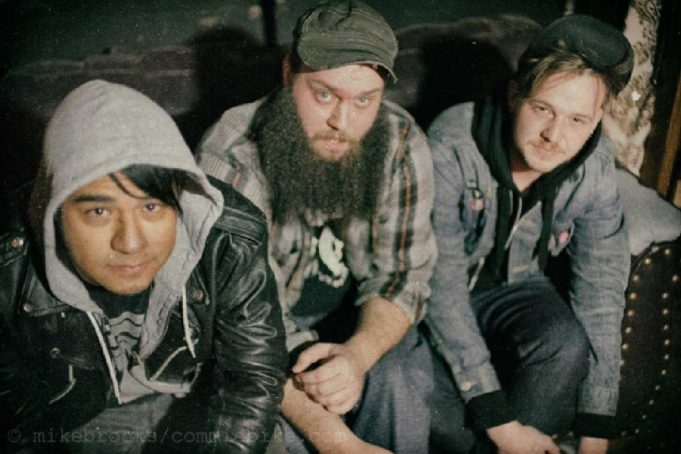 In the spirit of Christmas bonuses and cajoling your parents into letting you open a present early, local rock fans are getting a holiday surprise on Saturday. The notoriously bombastic punk ’n’ roll band The Phuss will take the stage for the first time in three years. The trio disintegrated into a pile of a drunken frontman and scattered weapons-grade drums without even finishing the set of their final performance.

Frontman in question Josh Fleming thinks of their reunion as a last show do-over. The ill-fated performance that broke the band’s forward motion in 2014 happened at The Grotto, and it’s something of a local legend as far as band breakups go. Here’s the gist: Fleming got trashed before they went on, fell over onstage three songs in, and drummer Trey Alfaro dismantled his kit and threw it at Fleming. The band was done after that. Fleming formed a cowpunk band called Vandoliers, Alfaro focused on his family, and bassist Forrest Barton joined heavy rockers Duell. Though The Phuss was done, its members moved on to better things. Yet, as the song goes, breaking up is hard to do –– moreso when your band doesn’t get the proper sendoff.

“Forrest has been pushing for a reunion since our last show at The Grotto, since we dissolved onstage,” Fleming said. “He kept saying, ‘I never got my last show, motherfuckers, so gimme my last show!’ ”

Unfortunately, both Vandoliers and Duell have had full schedules over the past few years (though Barton has recently departed Duell), so getting back together for their proverbial Viking funeral proved tricky.

Barton, who bartends at Lola’s Saloon, got Fleming a gig hosting a weekly Monday night open-mic gig there for the fall and winter –– Vandoliers hit the road again in March. And Alfaro has actually filled in on drums for a couple of Vandoliers’ early tours. Fleming said that the tension that exploded onstage at The Grotto has quieted down.

“We never hated each other,” he said. “But there’s lots of baggage being in a band together for eight years. We were so volatile and young, like 23, 24 years old. It was trying times leading up to when we ended. But Trey doing tours with Vandoliers here and there really helped things out with us. People grow up. He saw a change in me, and I saw a change in him.”

The band started practicing about three weeks ago, and, according to Fleming, the rehearsals have been going really well.

“It’s fun being loud again,” he said. “I’ve been playing acoustic for three years. I got my amp fixed, and now my ears are ringing.”

The set will include material from all three Phuss albums, including some songs the three-piece never got around to playing live.

“We wanted to make sure we got to play all the favorites,” Fleming said, “but some of those songs we didn’t play live are some of my favorite songs on the record. It’s about an hour-and-15-minute-set –– it’s a punk show, so it’s about as long as a punk show can be.”

Though The Phuss’ members are older and presumably wiser, a Phuss show is still, well, a Phuss show, which is arguably part of their charm.

“I don’t know if we’re gonna be awesome,” he said. “I don’t know if I’ll remember all the lyrics, but I know we’ll be having a blast. And we’ve fallen in love with the songs again. It’s been great that Forrest put this together. He really took control of it. When we were together, I wasn’t good at delegating. So I’m glad that he’s taking on this stuff.”

Besides The Phuss reunion, the bill at Lola’s also includes Dallas punkers From Parts Unknown, It Hurts to Be Dead (a garage rock band from Wichita Falls that Fleming co-produced and who toured with The Phuss), and NU-95, a young band who became fans of The Phuss after the band’s break-up. The show starts at 9pm. Cover is $15.

“Saturday night is a celebration about what we did, who we were, and kinda going back in time for a night,” Fleming said. “And if it feels right, we’ll do it again.”