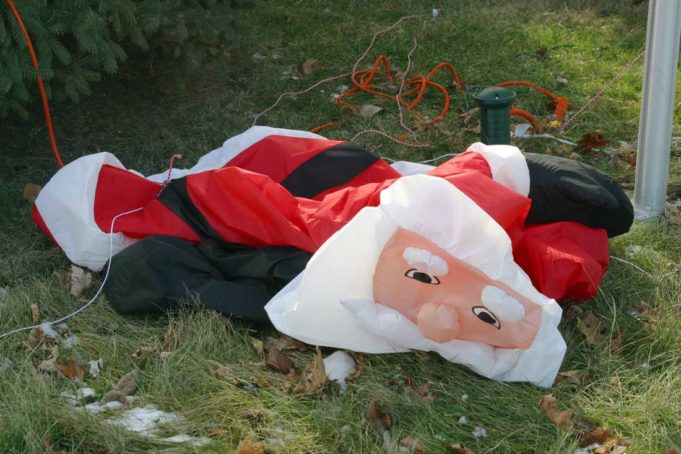 ’Twas the night before Christmas, when all through the house, everything was stirring because it was 1980 and I was a kid so excited I could almost pee. For the third year running, my brothers and I, having discovered my parents’ hiding places for all our Christmas gifts (spoiler alert – there is no Santa), had scoped out the wonderstuff we’d be feigning surprise over as the unsuspecting oldies turned on the dining room lights at the crack of 5 a.m. That said, if things ran true to form, there would also be a surprise large-sized gift that had been hidden we knew not where.

For many years after I had unearthed the Santa lie, I continued to be excited and surprised by the Christmas my parents provided. My mom and dad, despite being exhausted and emasculated, respectively,  by the deep economic depression of the 1980s, never failed to festoon the dining table with gifts, year on year, to be followed some hours later each Christmas mid-afternoon with an Abundantian cornucopia. By age 17, I was less excited by Christmas morning than I was about the night before. The promise of abundant gifts had been superseded by the promise of copious amounts of alcohol, dancing, and unimaginably bad flirting at a nearby club. Where a few short years earlier I had stayed awake in anticipation of the gifts to come, my late teens and early 20s were marked by late nights and long lay-ins. By the time I was returning from college to the bosom of a family Christmas, I had perfected the art of getting up just in time to scoff the roasted feast to soak up my hangover. Heady days.

After a brief period in my 20s when Christmas became almost quotidian (like the guy who eats a Christmas dinner 365 days of the year … really), I went and had a kid. Christmas was reborn for a another 10 years or so, meaning that for the most part I held on to the magic of Christmas (if gluttony and greed equate to magic) well in to my, a’hem, early 40s. Part of an entirely new-to-me Christmas magic as a parent is the ability to get your kid to bend to your will from around September to December 25 every year simply by claiming that if they don’t behave, you’ll text Santa because, yeah, you have his number.

Now, with the kid a late teen, we have nothing. Moreover, with family a safe 4,500 miles away, Christmas has become a time to lie in bed late, do some Olympic-level daytime drinking, and dread the on-Skype opening of reliably terrible and inappropriate gifts, too expensively bought and sent, from certain quarters of the family. One of whom insists on sending their gifts in October to sit anachronistically on our mantelpiece to “beat the rush.” The feast remains, though a large roasted affair has been replaced by an inventive range of deliciousness, my favorite being the 12-hour low-and-slow pork butt enveloped in homemade lasagna comforters, the sauce a savory treacle of tomatoes, fresh herbs, and au jus.

For the past three years, there has nary been a fleck of tinsel let alone a Christmas tree in our house. There is no sense of “bah humbug” about this. It is merely a reflection of the absolute lack of need for fripperies. Also, I have to tell you, America, that you’ve pissed on my festive chips somewhat. What is with the lack of Boxing Day, December 26? In my youth, the day after Christmas meant another roasted feast and more time to discover the majesty of my new bike/snooker table/record player (the surprise big gift). Through my teens and 20s, it was another night to go out and do all the things again that I’d done so badly on Christmas Eve, with no self-reflective improvement. Now I would simply appreciate another day’s vacation.

Christmas Yet to Come suggests more of the same for the next few years. At some point, I may get a pang for foreign climes –– I am thinking of a beach rather than a centrally heated, self-defeated English dining room. At a further point, I may well become a grandpa, though I will insist on the moniker Big G. Those who have cause to know insist this will reignite my delight in all things that children do –– the cute infant gurgles through tipsy toddler, to boundlessly energetic tween. This will, indeed, be a stern test of my keenly developed sense of derision for OPK (Other People’s Kids). I figure this to happen some time in my late 50s, at the expected rate and route for these things. While I will still be the stunningly energetic and gym-ready Colossus that I am as I sit astride my laptop right now, eminently capable of keeping up with any kid, I remain skeptical of the power of the grandchild to transform me into someone who gives enough of a shit to so do. Maybe my Christmases of the 2030s will be filled with the delights of gift- buying for an inevitably not needy tiny Tim, Brad, Madison, or Trumpella. Jeez, I might even, once gain, be energized by the electric anticipation of the night before Christmas, barely able to contain my excitement at the prospect of my grandkid’s smile illuminating the room wherever in the world they might live.

Bah humbug! I fully intend Big G to be the hilariously perma-buzzed elder statesman of our clan, his ready wit sharpened rather than dimmed by age and alcohol, the relentlessly large and strong guy whose grandkid believes he will live forever. I won’t show it, but that will be the only gift I need. To me, that will make every day Christmas.