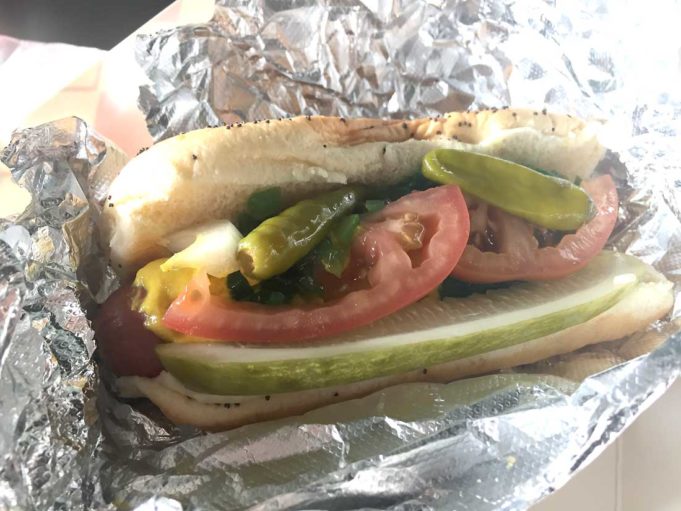 New York Pizza & Gyros (2707 Race St, Ste 121, 817-222-2433) on Race Street has a dirty little secret: It serves a ton of Chicago-inspired grub. The tiny, ramshackle shotgun shack, which shares space with longstanding watering hole Dino’s Live, is the new local frontline in the food battle between the Big Apple and the Windy City.

Chicago and New York City have long been culinary rivals. Residents of each town zealously defend their own styles of pizza, hot dog, delis, signature sandwiches, and just about everything else. Sometimes the fight gets a little ugly, like when Jon Stewart famously dismissed Chicago-style deep-dish pizza as “a fucking casserole.”

If a region’s sovereign cuisine is a lens into their culture and personalities, both NYC’s and Chi-Town’s are studies in dichotomy. Take the pizza, for example. New York-style is floppy, simple, and easy to fold over and eat on the run. Chicago pie looks like an edible aboveground swimming pool, its flavors complex and decadent. The hot dogs tell a similar story. New Yorkers prefer an unfussy, transportable, customizable dog with very few bells and whistles. The traditional Windy City version is loaded with peppers, a whole pickle, relish, a healthy swipe of mustard, tomatoes, celery salt, and a Chicago Red Hot frankfurter, all on a poppy-seed bun.

Even the walls at New York Pizza & Gyros have seemingly picked a side – dueling murals glorifying each city face off in a symbolic stare-down.

New managers have taken over Dino’s kitchen and changed the name to NYP&G. You can still order a beer or cocktail with your lunch, and I’m assuming you can also eat at the bar – and you have to go through the bar to get to the bathroom. Aside from that, it looks like Dino’s and NYP&G are two completely separate entities.

On a recent visit, my guest and I walked in with two goals: try the Chicago dog and the New York pizza. Though the hot dog comes in many forms with a variety of sausages, the friendly guy at the counter suggested I stay traditional. (He actually used the word “pure.”)

The Chicago-style dog ($3.99) was everything it was supposed to be: The casing of the plump, juicy sausage snapped, the peppers were piquant and tangy, the bun soft and warm, and the accompanying fries were remarkably crispy. Just as successful was the thin, gooey slice of New York-style pepperoni pizza ($1.99), each slice the size of a mid-sized Subaru.

To further confuse the in-house geographical pissing match, my guest opted for the Philly cheesesteak ($7.99), a straight-ahead rendering of the City of Brotherly Love classic, with sliced beefsteak, mushrooms, green bell peppers, and melted cheese on a toasted hoagie roll. The very similar but far superior choice was the iconic Chicago heart attack on bread, the Italian beef sandwich ($7.99). A higher sandwich intelligence is at work here, one that understands the crucial role of contrast and the life-giving spark of seasoning. Thinly sliced roast beef mingled with jalapeños, bell peppers, and pools of melted cheese, all crammed into a spongy split-top roll and served with a peppery au jus on the side. Fries accompany both sandwiches.

We may not have settled the debate of which city has better food. But at least we found a great place to compare them under one roof.