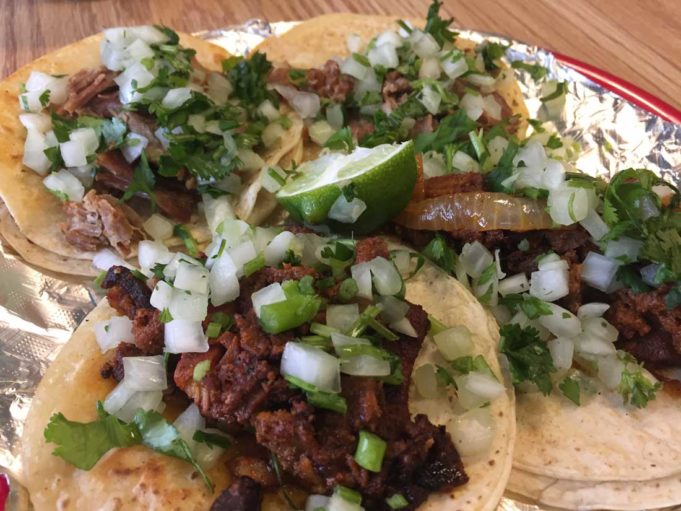 Is there a greater use of a person’s time than a taco hunt? The answer is a resounding no. Imagine a treasure hunt that spanned the whole city, but instead of finding booty, you get foodie. OK, sorry. But, damn, I love tacos. The game is simple: Pick an unfamiliar area of town, drive there, find tacos, profit.

Recently, a fellow food’splorer and I rolled through Camp Bowie West, which not that long ago was better known for its cut-rate strip clubs and stabbings than gastronomic gems. Skin joints still abound, but there are also some pretty great eateries.

On a sun-bleached window sign, Tortilleria La Original de Zacatecas (7931 Campo Bowie West Blvd, 817-560-7950) brags about serving the best street tacos in town. Though I found that bold claim to be scandalous, the tumbledown stripmall joint does win serious points on charm.

On the aqua-colored walls inside the bustling one-room taqueria hang none too few renderings of the Virgin Mary. There’s even a framed print hung on a portion of wall that’s covered in what appears to either be tinfoil or reflexive insulation. Completing the strange tableau is a bizarre manger-looking scene with a porcelain doll and lots of tinsel. Lots. I also found it odd that there was more space behind than in front of the walk-up counter, though the dining room was plenty spacious. 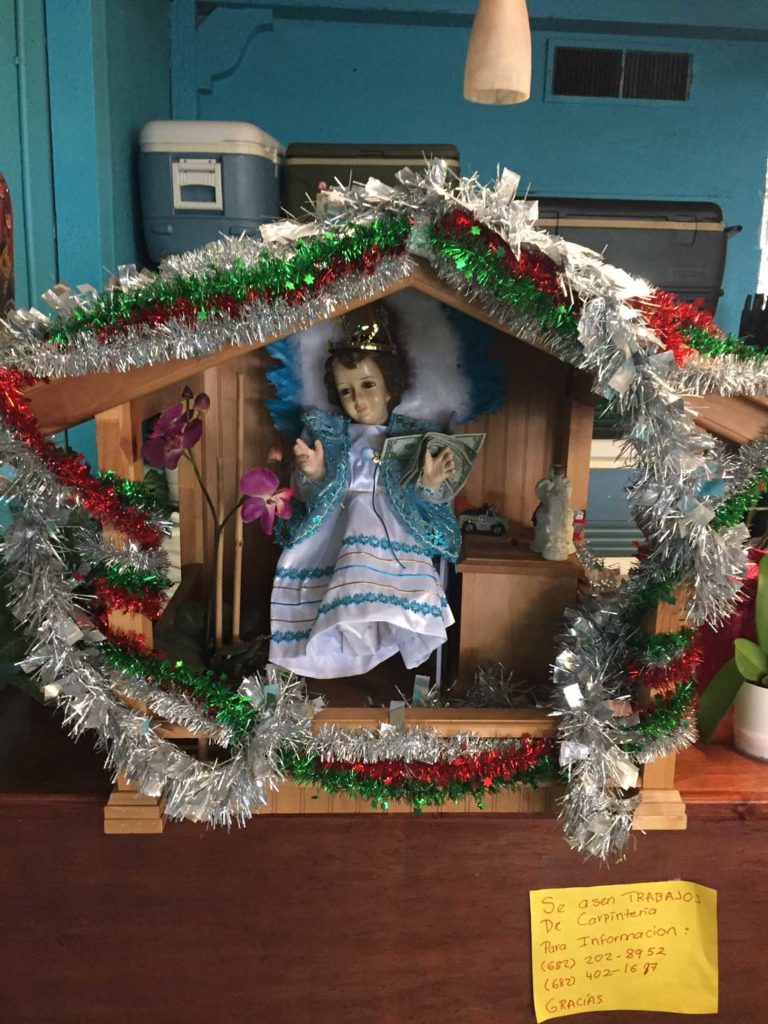 On our recent weekday visit, the place’s seats were mostly full, and to-go orders were flying out the door. The kitchen sells its salsas and housemade chips, so we felt compelled to try them onsite. The crispy, fresh-tasting chips alone were worth the $1 price tag. The trio of salsas (dark red, lighter red, and green) were all a little runny for my taste, and their spice ranged from What-have-I-done? hot (dark red) to Didn’t-I-just-eat-something? bland (green) on the Scoville scale.

Both my pastor ($1.75) and carnitas ($1.75) tacos were overcooked and a bit dry, which is especially a shame for the former – I missed the bright red oily ooze and chalky texture of good pastor. Each was served in delicious double-ply corn tortillas with the usual accompanying cilantro, chopped onions, and lime wedges.

For a much better taco but far less comfortable experience, keep driving west until you hit Dos Hermanos 1 (8633 Camp Bowie West Blvd, 817-560-9474). The taqueria/carniceria is clown-car cramped, with aisles of housemade tortillas, a deli counter with fresh meats and cheeses, produce, everyday grocery items, and piñatas everywhere. You can even get your taxes done by a woman sitting behind a makeshift desk.

The dining room is a chaotic arrangement of well-worn mismatched chairs and scratched-up tables, a few of which were awkwardly pushed right up against one another, with seating on only one side. Imagine the hilarious stare-offs! The kitchen is open, and there’s counter seating, which allowed for some lively banter between the small army of cooks and their customers. To order, you just walk up, find someone, and start talking. To check out, you stand in a line that winds through the dining room, creating a repeated cacophony of “con permiso.”

The food was everything you want in a hole-in-the-wall. For comparison’s sake, I had the same two meats in my tacos as I did at Zacatecas. The pastor ($1.59) seeped its sweet red oil with a flavor close to burnt caramel. Glorious slabs of carnitas ($1.59) greedily soaked up the accompanying green salsa. The double layer of housemade corn tortillas tasted fresh off the press. All of the tacos were garnished simply, with onion and cilantro.

This hunt was a resounding success. Maybe I’ll go back to Zacatecas and mount that doll on my wall. It’ll probably be easier just to buy a piñata at Dos Hermanos.