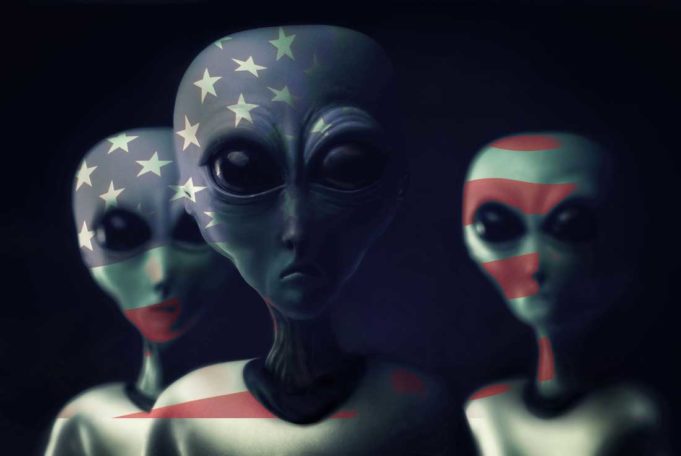 Words matter. Immigrant. Alien. Immigrant alien. Non-immigrant alien. Common terms on government forms –– oh! The seemingly endless forms, as opaque and linguistically abstract as they are offensive and interminable. Have you ever been a terrorist? No! Have you? Have you ever been a Nazi? Again, hell to the no. Violation of religious freedoms? Moral turpitude, anyone? Dabbled in any human trafficking lately? I’m assuming that the right answer to all of these is “no,” unless you want to work in the current White House.

It strikes me as pretty much universal that in a modern Western culture shaped by America, the use of the word “alien” conjures up images of little green men, some mysterious life form, from a planet far, far away. In all cases, the alien is the enemy. A nefarious space traveler from an unimaginably different and inferior land hell-bent on invading and destroying the homeland. Green is the color of envy, of course. Here I sit, an alien, every time I fill out a form for the U.S. government. Looking back, I was transformed from homo sapien to alien, unnoticeable by outward appearance, sometime around 2013, when I completed my first U.S. immigration form, back in Old Blighty. Nobody commented on any marked change in my appearance or evident intent to invade and destroy the homeland. To me, and those I met, I was the same old guy – Big T to most, Big ’Un to the linguistically reductive.

An alien I am, for now. I will be returned to homo sapien status once enough time has passed and money has been siphoned to government coffers for me to become a U.S. citizen. A chain or an anchor, I will never be. While alien is the official government term for those people who come to the United States legally, with money, a job, and advanced college degrees, there is a cesspool of pejorative shorthand for other types of people – there, I said it: the almost never heard p-word – who come to this country to rejoin their kids, husbands, wives, ailing parents. Chain migrant. The person who enters legally, answering all the dumb questions, replicating photos and processes, getting flu jabs whether they want them or not, paying fees after fees after fees. Anchor baby. Children born with the same degree of intent and love and hope as those good ol’ boys and girls born to U.S. parents. The kids whose parents most likely are here on a visa – the aliens – who pay and stay, graft and grind, giving their hearts and minds, and taxes, labeled negatively by some.

Anchor. Oh! The weight. Dragging down the homeland. Chain. Whoa! The yolk limiting the homeland span and scope and ambition. Alien. The little green men and women invading the homeland with their skills and their educations, their hard work and dedication. Words matter. People matters.