I was half awake when I saw the new entry on our refrigerator calendar – April 15, GOAT YOGA!

“I got us tickets,” my lovely wife chirped. “I think it’ll be fun!”

She and I love goats. We plan to have some in the near future, but still …

I was introduced to yoga as a warm-up exercise about 20 years ago when I was hired to do a play. Actors love to warm up. This particular group liked yoga. So, I did yoga. Sorta. It was more of a nice stretch, some time to collect my thoughts, and a colossal waste of valuable rehearsal time.

“You like goats,” she smiled. “There will be lots of goats.”

“It’s at a brewery,” she said triumphantly. 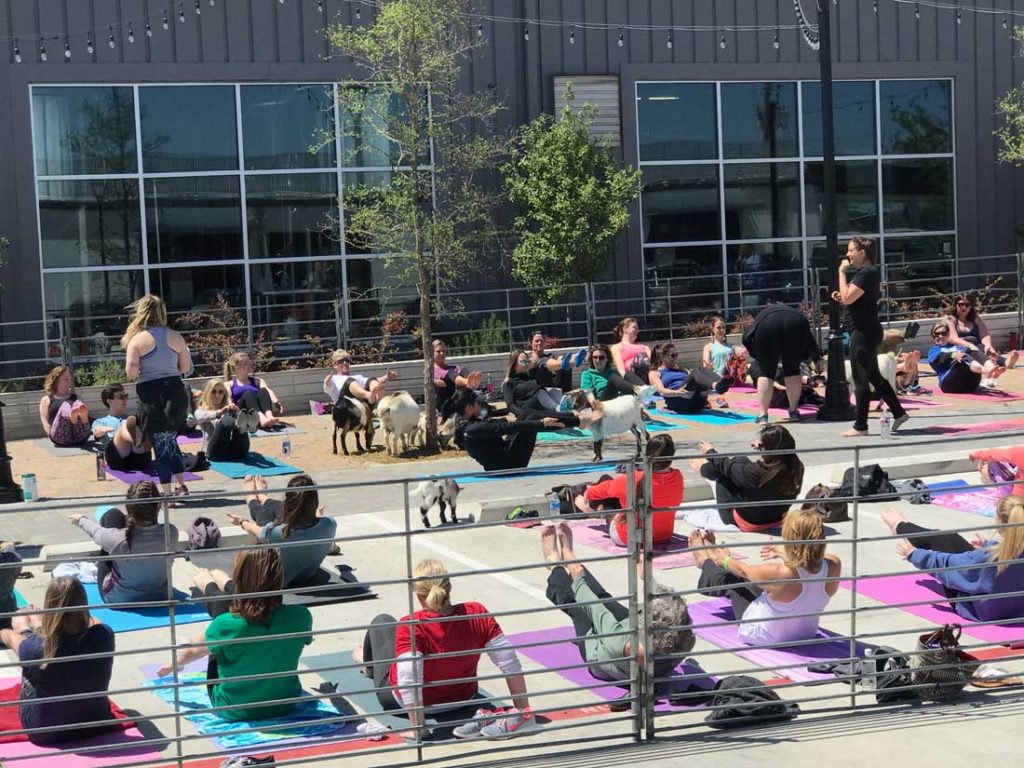 We arrived half an hour early for the 1:30pm event on a Sunday afternoon, and it was a beautiful one. The large fenced-off area in the Legal Draft parking lot was full of yoga enthusiasts unfurling their mats amid a herd (flock, gaggle, mob) of 20 adorable goats, all ages and sizes – and since we all know baby goats are the rage on the inter-webs, there were plenty of kids – none in pajamas, but that would’ve been asking too much.

Folks from 20-year-old Arlington Yoga Center manned the table that checked us in, gave us our wristbands and our two wooden tokens good for one draft beer each – I took those and stored them safely in my pocket. For later, I told myself.

Class leader for the day Marissa Soto and her Yoga Company cohorts wisely allowed about a half hour of goat appreciation before starting the class. Once it started, she orchestrated the students to allow for the inherent distraction that brought everyone there in the first place. Let’s be clear – nobody came to get a good workout. Everybody came hoping that a goat might perch on their back while planking. A couple of practitioners who scored a goat early did nothing but sit crosslegged on their mats and hugged the little critters. That seemed OK with Soto, who kept the pace leisurely and fun. Mind you, some – sans goats – really did try the poses.

Since I conveniently don’t own a yoga mat, I slipped away to the bar. Legal Draft is celebrating its second anniversary of brewing and serving craft beer in Arlington. I found other non-yoga types among the day drinkers in the spacious tasting room, enjoying live music, drafts and flights of craft beers brewed onsite. With my two wooden tokens, I ordered a Presumed Innocent IPA for me and a Legal Blonde Lager for my limber beloved, and headed back to the goats.

The class lasted an hour. The additional half-hour that followed allowed for more goat-mingling and picture-taking, but with a cold one in hand. Ticket holders were also entered into a raffle at the conclusion of class. My supple spouse won a yoga mat and water bottle set. I’m screwed.

Next Goat Yoga event is scheduled for May 12. Details can be found here.