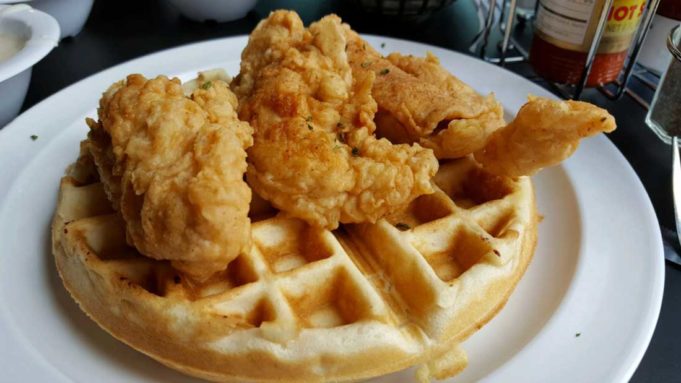 When chic Dallas coffee house and late-night breakfast joint Café Brazil came to town a few years back, I was excited. There weren’t many options for after-bar eggs and coffee outside of a handful of 24-hour chains and Ol’ South Pancake House (which was hilariously sketchy back in those days). None of those options was even remotely cool, certainly not Deep ELlum hip. But Brazil’s western outpost flopped. Whatever cache the place brought over from Big D was squandered in its calamitous first few months. Wrong orders, long ticket times, terrible service, and cold coffee plagued the West Berry Street location. How it lasted at long as it did is anyone’s guess.

A couple of weeks ago, Taste-N-See Chicken and Waffles (2880 W Berry St, 817-841-1870) slid on into Café Brazil’s abandoned TCU-area spot after the soul food eatery shuttered its original location on Alta Mesa Boulevard in the Southwest part of town. For a second time, I was excited about a new breakfast-y joint at that location.

I have no doubt that co-owners DeMarcus Davis and Anita Wilcox will get the food and service right, but banking on TCU bros and sorostitutes to understand the magic of soul food seems a risky proposition. For the co-owners, this is truly a homerun swing. If it works out and the kids dig it, the son-and-mom team will be swimming in their Scrooge McDuck money bin. If it doesn’t, they will have closed a restaurant in a sleepier part of town with nothing to show for it.

The chicken-and-waffle combo has been a late-night staple since its inception back in the ’30s in Harlem. The culinary marriage was invented for one express purpose: to soak up booze for the after-hours crowd. Eventually, like all things fried and decadent, we Southerners have appropriated the one-two punch as our own. Taste-N-See’s first location paid homage to that history, with its jazz-club-meets-gospel-church atmosphere. The new location has a little more rock ’n’ roll-meets-Rat-Pack vibe, with framed pictures of Elvis, Ray Charles, and The Chairman of the Board.

Taste-N-See’s kitchen is well known for two things: It doesn’t skimp on portions, and it knows how to make huge, moist, flavorful chicken. When you go, it’s mandatory that you try one of the chicken-and-waffle combos. They’re as good as anything you’ll find at Buttons or Fixture and at a fraction of the price. On my recent lunchtime visit, three plump, brined, juicy chicken tenders arrived atop an ethereal suspension of one giant, airy, sweet waffle ($9.99), accompanied by maple syrup and a shot glass of butter. My side of grits was buttery and delicious if utterly superfluous.

If you don’t want breakfast for lunch (or dinner), Taste-N-See offers a decent selection of burgers, fish, and other Southern soul-food classics. The shrimp and grits ($13.99) have always been a personal favorite, but my guest opted for the cornmeal-battered fish-and-sides combo ($11.99). The two fillets were piping hot, fresh-tasting, and, of course, enormous. The sides of red beans and mac ’n’ cheese were both housemade and excellent – though the beans were a little on the sweet side.

Service was prompt and pleasant, and I couldn’t eat for the rest of the day. For now, the kitchen closes at 8pm, which seems odd considering the vast number of drunken TCU kids who are likely to stumble in and spend money after the bars close –– not to mention those of us who tend to dine later in the evening. Still, it’s nice to be excited about a breakfast joint again.