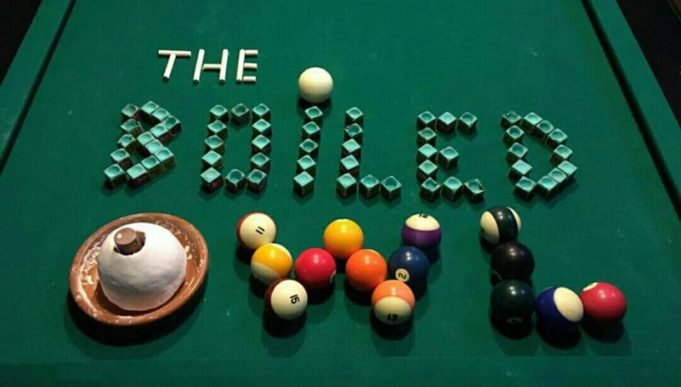 “Some dumb old racists just learned the hard way that yelling the n-word at the Owl is not acceptable behavior. Proud of my community and my home bar for standing up for the right thing.”

That’s what Naaman Rodges posted on Facebook Sunday 10:45 p.m., apparently right after the Boiled Owl Tavern’s patio erupted into a brawl. Incited by a man throwing around a racial slur, the fight, according to some eyewitnesses I spoke with, grew increasingly violent, replete with broken glass, a tossed chair, whirling haymakers, near choke-outs, misplaced punches, and a curious decision on the part of the cops. Rodges wasn’t at the bar when I went there last night to hear the story, but I did talk to Cole. An Owl bartender and barback who withheld his last name to protect his privacy, he was at ground zero for the occurrence at West Magnolia Avenue.

“I’m sitting at that chair right there,” he said, pointing to a seat in the patio’s northwest corner where he had been hanging out with six other regulars that Sunday. Seated at the taller table directly opposite their spot were five other adults, three in their 20s or 30s, he said, the other two appearing to be a married couple in their late 50s or early 60s.

Cole went on to say the guy looked directly at an African-American customer who had been sitting with Cole’s friends and said, “What? You get it, right? You know what I mean.”

Cole and another regular, Johnny Powell, gave the guy a warning. “Johnny looks at him and says, ‘Look, man. You’re getting a pass right now, but you need to stop.’ ”

Cole’s girlfriend Claire, who also withheld her last name to protect her privacy, said the man repeating the slur seemed to be baiting them. “He was doing it in this way, like, ‘What? I can’t say this?’ And he kept doing it, playing dumb, like he was trying to understand why he couldn’t say that word.”

Cole said the man became aggressive with Powell. “I’m still sitting down, kinda under [the man], and I said, ‘Look, dude. [Powell] is right. You need to accept that what you’re doing is inappropriate, understand why it’s inappropriate, or I’m gonna ask you to leave,’ and he leans over me and puts his finger in my face.”

Cole said that at that point, Powell stood up, and the guy took offense. “So I stood up to try to de-escalate it,” Cole said, “and that’s when [the man] shoved both of us.”

Then the punches started flying. Rather than restrain him, the man’s companions jumped up and started shoving the other patrons, the eyewitnesses told me, and the confrontation instantly mutated into a full-on melee, with the slur-slinging customer’s defenders attacking the regulars and the regulars responding in kind.

At that point, Matt Day, the bartender on duty that night, rushed outside to assess the situation with an off-duty Owl employee, Clint Durrett.

“I ran out there … and it was the five of them versus the entire patio,” Day said.

Day thinks the older couple was the guy’s parents. “The mother was being grabbed and pulled down to the ground because she was swinging on one of our patrons, so I had to pull that person off her and remove him … and I look up, and the son is holding up a chair, and he tosses it. It was mass chaos, broken glass everywhere.”

Day, Durrett, and Cole eventually dragged the instigator back through the bar and out the front door, after which Day called the police. “In almost 20 years of bartending, I’ve only seen one brawl that topped this,” Day said. “It was pretty scary. … They’re outside fighting, and I’m on the phone with the police for like five minutes.”

Day emphasized the urgency: “I told them I need officers here now. I have, like, 15 people in a brawl at the bar.”

Police arrived about 15 minutes later, Day said. (The Fort Worth police did not respond to my calls by press time.) Day locked the door to keep the alleged aggressors from returning. Day said that the man who doubled-down on saying the n-word continued to rush at Cole. “I thought he was going to come through the glass,” Day said. “It was crazy. There were bloody handprints” on the front door.

The cops had to follow the instigators down the street for their side of the story. Police, Day said, “did their normal stuff, and I came outside to talk to them, and we were basically told that because it was mass combat, either everybody gets tickets, or no one gets tickets.”

According to Day’s account of interacting with the police, their decision had to do with the sheer number of participants and the resulting differences in each of their stories.

As a long-time employee of the Owl, I realize that bar fights happen every week all over town, and while the Boiled Owl is usually free of violence, it is a bar, after all, a place where personal beliefs, hot sports opinions, and existential turmoil spill out of their keepers’ internal monologues and onto the people sitting around them. Sometimes, that malaise engenders a scuffle and an ejection, and we dust off our hands and go about our night without the story ending up in the newspaper. But because a group of people stood up for decency, literally striking blows against the assumption that racist words can be uttered loudly, proudly, and with impunity, this fight story is worth repeating.

I asked Owl co-owner Autumn Brackeen about the incident. She replied via text, “It speaks volumes about our community that that type of racist rhetoric and hate speech was shut down immediately by our staff and patrons. I’m so grateful we are surrounded at the Owl by people who come to the defense of my staff when confronted by physical violence.”