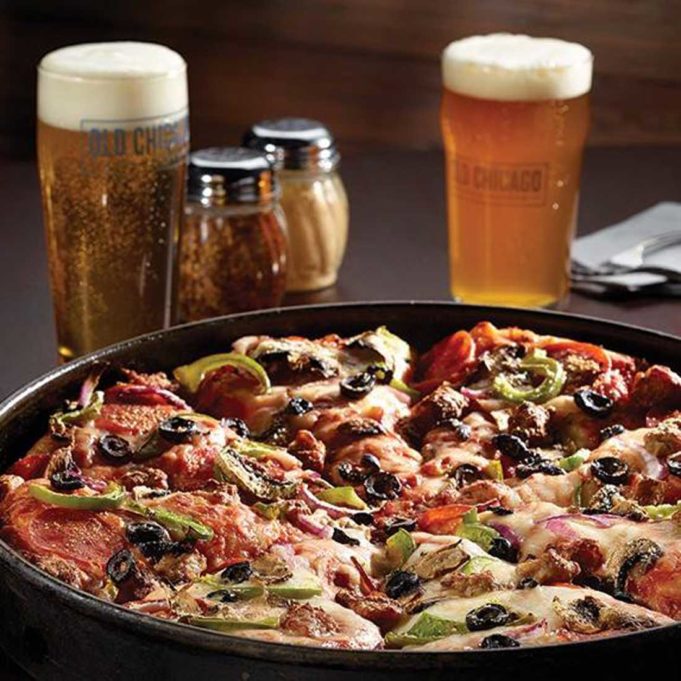 Big props to Old Chicago Pizza and Taproom for a couple reasons. One, the free drinks. Two, the comped meal.

It wasn’t for my wife and me. (Too bad.) It was for an “adorable” (my wife’s words) family of four: husband and wife and two little kids, neither older than 10. The recent Sunday afternoon of our visit also happened to be draft day for at least 200 fantasy football leagues. There were dudes in NFL jerseys hunched over laptops just about everywhere you looked. My wife and I sat at the bar, across the way from some idiot in an FNN/“Fake News Network” t-shirt. The family was behind us.

Also behind us was the internet jukebox that we had not noticed until the otherwise bright, sunny, convivial interior grew thick with aggressive, dreadful white-boy rap-rock. Every other word was “fuck” or “fucking.” And at earsplitting volume. What was OK for Huey Lewis, AC/DC, Boston, Toto (apparently, “Africa” is some sort of cult hit now), and all of the other music selections was not OK for this. My wife just started complaining openly, loudly enough for everyone around us to hear but not the culprit. He was a wedding band-sporting thirtysomething wearing some kind of sake bomb tee sitting about 10 barstools away. My next thought was to complain to the bartender, but she was slammed and didn’t have any backup. My wife got up to pee. I turned around to check on the adorable family. The kids, an older boy and younger girl, were busying themselves with straws and the utensils. The parents had their backs to me. Mom, Dad, and the children were all dressed as if they had just come from church. I tried to focus back on the music but couldn’t locate it between my ears. In its place was a talking head going on about sportsball – all 900 TVs in the place were tuned to something sports-related. My wife returned.

“I told the manager,” she said, hopping up into her seat.

Not only did the manager turn off the jukebox – in the middle of that crap-rock, which was awesome – but he also comped the adorable family’s meal. And, as my wife and I witnessed, he apologized to them. Let that marinate. One grown man had to apologize for the actions of another (presumably) grown man. This is the kind of world we live in, among classless douchebags, because the adorable kids weren’t the only kids in the restaurant. Thanks to that manager for taking care of business. It’s a good look that will definitely bring my wife and me back.

She and I thought of Old Chicago as a day-date destination that Sunday because we had stumbled on the place a couple of weeks earlier. Living in North Fort Worth, we have mucho limited dining and entertainment options. We wanted someplace that wasn’t Flips Patio Grill, Dublin Square, or Texas Pit Oyster Bar. Driving along the Presidio complex where Old Chicago sits on the way back from some home-furnishings expedition, we saw the signage. Hey, we thought. We like Chicago. (I drove through it once. Good-looking city.) We like pizza. We love beer. Let’s go. And we were glad we did. Since this visit came before I started doing low-carbs (horrible, I know, but it’s either that or no booze, and I’m not doing no booze), I was able to sample one of the pizzas. Though some of the “signature” pies sounded good – especially the steak and beer cheese (also with Guinness-made mustard cheese sauce, chopped bacon, grilled onions, roasted garlic, green onions, and Asiago) and the Italian Grinder (with seasoned beef, salami, pepperoni, sweet Italian sausage, red onions, roasted garlic, red peppers, and sliced pepperoncini) – I resorted to my old standby: Italian sausage, green peppers, and mushrooms on hand-tossed crust. It was delicious in that generic, unspectacular way that most chain pizzas are: thick, rich crust, tangy sauce, gooey cheese, and an undoubtedly precisely measured portion of fresh, succulent toppings. Why I would agree to go back to a pizza place when I know that most of the menu goes against my diet tells you all you need to know about dining and entertainment options in North Fort Worth.

Along with serving as a fantasy headquarters – Old Chicago promotes itself as such on its website – the place is known for its gourmet versions of mac ’n’ cheese. I had a bite of the traditional. (Just a bite, I swear.) It was pretty darn creamy and stick-to-your-ribs scrumptious. Some of the special varieties include chicken pesto and the Sicilian Pepperoni Roll Mac (pepperoni, green onions, corkscrew macaroni, and a blend of Asiago, cheddar, mozzarella, and pepper jack, topped with pepperoncini and served with toasted bread crumbs).

The only thing I could order that wasn’t a salad and that I could honestly sink my teeth into were the bone-in pork wings. Basically ribs, they were slathered in not-too-sweet barbecue sauce and melted in the mouth. The only problem was that I didn’t order them twice. Instead I went with the *sigh* Italian salad. In a word: serviceable.

Part of Old Chicago’s non-chain-y allure is the craft beer selection (more than 90 available), and I’ll be damned if I wasn’t having a brew (or four). A nice little touch is that taps from Texas are hung with a “local” sign. Which didn’t stop my wife from ordering a Sculpin IPA from Ballast Point (San Diego). On my first visit, pre this low-carb nonsense, I went with a Shiner Sea Salt & Lime: bold, quaffable, lighthearted, a solid B. This time, I called on the pride of Mexico, Corona Light. Several of them, in fact, and my indulgences were reflected in the hefty tab.

Old Chicago isn’t cheap, but I guess that’s the price for great service. This visit, we saw an honorable man in action. Last time, when the place was nearly empty, we happened to arrive during a bartender training shift. That’s where the free drinks came into play. What? It was either give them to us or throw them away. #greatservice See you again soon, Old Chicago.