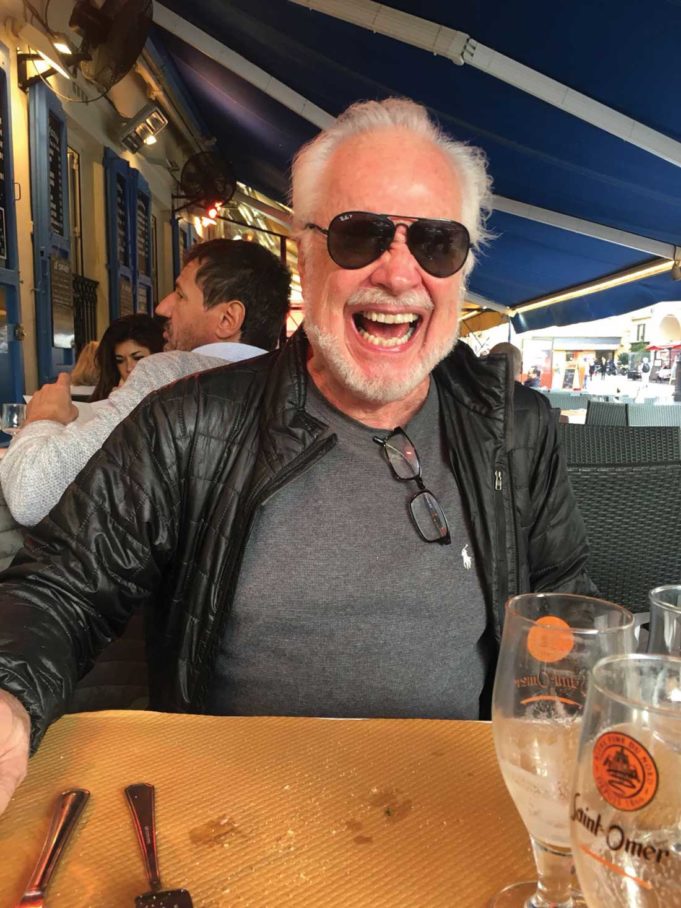 Fort Worth painter Ron Tomlinson died last week at his Westcliff home. He was 73. Among the indelible recollections I have of Ron were the first words I remember him speaking to me:

“What if that dog was blue?”

It was 1985, and I was an 8-year-old student at Fort Worth’s Reeder School, an art and theater project for children aged 4 to 14. The dog in question was part of a composition in tempera paint on construction paper, a medieval scene showing stick-figure knights assembled in front of a crude battlement — an art piece coordinated with the school’s dramatic production of the 12th century French poem “Aucassin and Nicolette.”

The Reeder School had been founded by painters Dickson and Flora Reeder in 1945 as an outgrowth of the Fort Worth Circle, a community of progressive artists active during the 1940s and ’50s. The school shuttered in 1958, and Dickson died in 1970, but Flora restarted the school in 1981 with Ron’s help. As Ron had studied painting with other members of the Circle (notably Bror Utter) growing up in Fort Worth, he was a natural artistic partner in the project.

In 1962, Ron left Fort Worth to study painting at Boston University without (as he often said) any intention of returning. His studies took him to New York City, where he studied with the painter Philip Pearlstein, and to the Skowhegan School of Painting and Sculpture in Maine. During this time, he married Sally Shaw, another Fort Worthian, one whom he had known since fourth grade.

A visit back to Fort Worth to meet with the local draft board marked a turning point for Ron, who registered as a conscientious objector. Though he had been well-positioned to make his mark in the New York art scene, he left the mainland to teach art in the Virgin Islands (a service requirement of his C.O. status) before moving on to the Quaker community of Monteverde in Costa Rica. Ron and Sally spent 10 years in the rainforest, where they built a house, taught art and English, and started a family.

As much as they loved their home in Monteverde, Ron and Sally wanted their two young daughters to be able to go to museums, hear a symphony, and to know more about the wider world than they could learn in their small mountain community of expats. Returning to Fort Worth was intended to be a stopgap until they could decide where to settle. Something had changed, though, both for Ron and Sally, and for Fort Worth.

“There was something here,” Ron told me, “and it was bigger than just the museums and the symphony, though of course that’s part of it.”

Fort Worth had become more than just a good place to raise a family — it was a good place to paint. Though Ron would travel frequently back to New York to work, he came to love the town he had once been so ready to leave.

Sally Tomlinson became a much-loved teacher of languages at William James Middle School until her death in 2015. Ron continued to teach painting. As artist-in-residence at Texas Wesleyan University, with the Reeder School, and later with Imagination Celebration, he took a marked joy in exposing young people to art and ideas, especially those whose upbringings had never brought them into contact with the great art that was available to them — often for free — in their own hometown. It broke his heart, he said, knowing that there were kids in Fort Worth who had never been to our museums.

Ron showed the world to his students. He compared the feeling he got as a teacher watching something click for a student to the feeling he’d get when he stepped back from a painting he was working on and knew that it was good.

Ron Tomlinson’s painting, firmly grounded in history and analysis while dancing across varieties of subject matter and technique, garnered the respect of critics and patrons at home and abroad. But his life’s work as an educator will leave as much of a legacy, particularly here in Fort Worth. Together Ron and Sally Tomlinson made an outsized impact on the students to whom they opened their home and their hearts.

Ron’s friends and family will remember, and miss sorely, his generosity of spirit and uncompromising sense of social justice. He insisted on enjoying himself, on sharing that enjoyment with those around him, and on taking an open and innocent pleasure in everything beautiful life has to offer. He laughed loudly and loved deeply. He had little patience for ignorance and none at all for cruelty.

When Ron asked me to consider the possibility of a blue dog, he was propping open a door that he knew typically gets kicked closed as children learn to see the world “correctly” — when you know the grass is green and the sky is blue, you forget how to see the colors of light. Ron understood this, and his life’s work as a painter and educator was to help us remember how we saw the world — before we learned we were wrong.