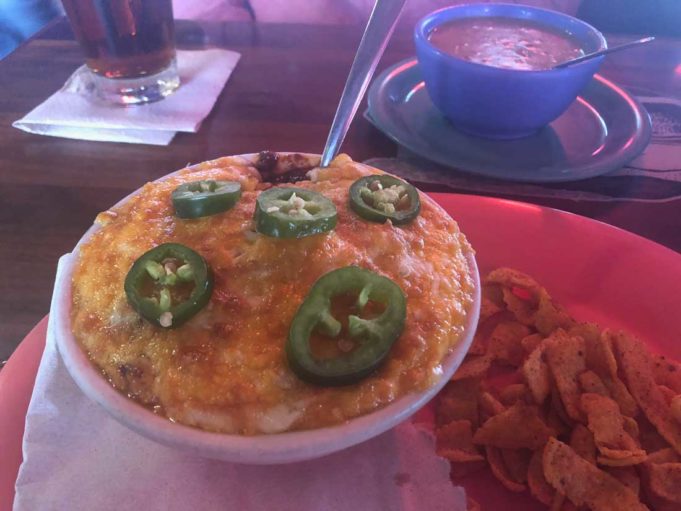 I can’t really say that J&J Oyster Bar has stepped up its game. Sure, Chef Angel Mota, an ex-pat from the greasy spoon/sometimes upscale/always cheeky burger bastion Fred’s Texas Café, now mans the kitchen. He’s brought the same sneaky high-end-at-a-hole-in-the-wall sensibility from Fred’s to the kitchen of the decades-old fish joint on University Drive in the Cultural District, but I can’t say J&J’s has improved with any modicum of sincerity, because I almost never ate there before Mota arrived back in January.

I’m not sure why I never stopped by J&J or “JJ’s,” as it’s commonly known. I think maybe because I pass it so often on the way to work, the white-brick building has just blended in with the scenery, and my mind’s eye filed the tiny eatery in the part of my brain that likes things to stay they way they are. The few times I did drop by, now years ago, it was almost always for the place’s famously reasonable happy hour featuring scooners of ice-cold beer.

Still, walking into the adorably cluttered dining room, it all felt so familiar: the taxidermied marlin caught in mid-flight on the wall, plastic fish hanging from the ceiling as though some unseen fisherman was lurking above, neon bar signs and other promotional bric-a-brac covering the walls, old, nicotine-stained photos of bands (presumably ones that played the restaurant’s sister music venue, J&J’s Blues Bar, which shuttered almost a decade ago) plastered to the ceiling, and baskets stuffed with condiments and crackers occupying estate on the eight or so high-top tables and booths surrounding the little horseshoe-shaped bar. The resulting vibe of the combined assortment of stuff is homey, relaxed, and welcoming. On my recent visit, the overhead speakers blared ’90s hits from my youth, adding to my “Oh, I remember this place” feeling.

The regular menu is heavy on the sandwiches and fried seafood and offers a variety of cold crustaceans on ice –– all oysters are imported from the Gulf, so don’t go there looking for Bluepoints. The biggest difference in the bill of fare, at least according to my shoddy knowledge of the previous menu, are the daily specials.

My first visit in years happened to be on a chilly, rainy afternoon, which ended up being a turn of good fortune. On dreary days, Mota prepares one of the best portions of chili ($9.95) you’ll find this side of, well, Fred’s. Fork tender beef tips swim in a thick, cumin-and-chile powder-rich liquid that was more sauce than broth, covered by a baked crown of molten yellow and white cheeses, topped with sizable wheels of sliced jalapeños and accompanied by Fritos –– the culinary equivalent of a fluffy, warm blanket.

My order of tilapia ($10.25), the fish of the day that afternoon, showcased more of Mota’s chef-y flair. A fresh-tasting, sweet-spicy mango salsa topped the moist, perfectly cooked white fish. Though tilapia on its own doesn’t exactly jump off the menu, its topping, a pico-looking amalgam of fruit, onions, and jalapeños, elevated the dish to something crave-worthy.

The kitchen’s same creativity was on display on my subsequent visit. The thin tostada beneath the ceviche ($9.75) could have buckled under the weight of jalapeños, onions, avocado, lettuce, julienned carrots and red cabbage; tender, zesty, citrus-cooked shrimp and white fish; and tomatoes that slowly wrinkled and caved in, giving up their juices to the cause. My appetizer of bacon-wrapped shrimp ($2.50 each) was plump and salty, though they were more comforting than exciting.

On both of my visits, Mota was donning a cowboy hat while hustling around the open kitchen. I guess you can take the chef out of Fred’s, but …