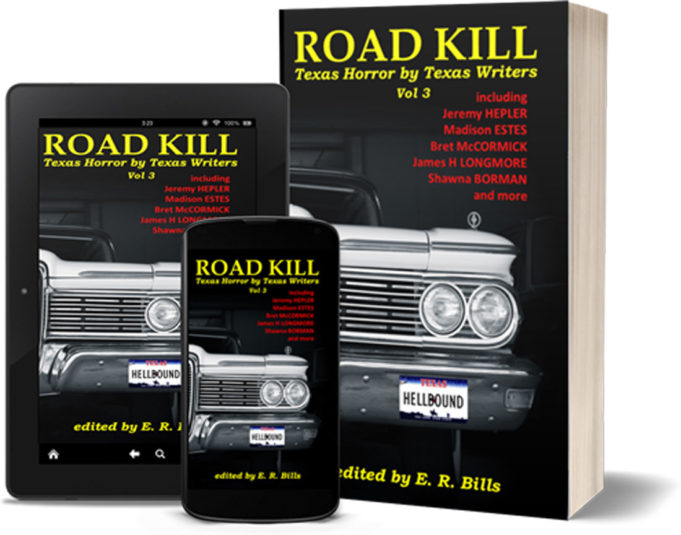 Stories in an anthology can be as varied as a week of Texas weather: In the best of times, you get a week of comfortable sunshine and warmth. In the worst, it can be blisteringly hot or rain the entire week. Volume 3 of Road Kill: Texas Horror by Texas Writers, unfortunately, feels like one of those weeks when, most of the time, the weather could definitely be better.

“A Real Haunting,” the opening story by Madison Estes, covers a brother-and-sister ghost-hunting duo who get more than they bargained for while on the infamous Bowden Road in Huntsville. And while it has some creatively unusual happenings, it’s not very scary, and the ending fails to make the most of its setting and characters. It’s also indicative of the quality of most of the stories: standard frights that fail to either properly scare or connect on a deeper level of theme and character. Such is the case with “A Night at the Spring,” by Dennis Pitts, which feels like a lesser Twilight Zone episode. “2908 Porch Swing Lane,” by Jacklyn Baker, about a woman in charge of building a home on mysteriously shifting land, ends up just being some mysterious happenings and then an ending of expository dialogue that fails to make an impact. And more than a few stories start with something horrible or supernatural happening right out of the gate, with no build-up, so that it’s almost painfully obvious a twist is coming. This makes a good chunk of the stories feel boring and predictable, like “The Deal,” by Samantha Andrasko, about a woman who brings her kidnapped father and a variety of severed heads to the crossroads late at night. The feeling of predictability even keeps some stories from being great, such as James H. Longmore’s “The Nightmare Man,” about a sideshow performer who can ingest the nightmares of people for a price.

Still, none of the stories are undone by their concepts, most are a second draft away from being good, and none suffer from a lack of writing quality. There’s only one real clunker. In “The Consequence of Thought,” author Aaron Milstead seems to think that writing about ugly things equals scary, when really it goes from potentially scary to overdone to tedious in its tale of neo-Nazis, secret experiments, animal torture, and so on. And even it could be improved by simply not trying so hard to be dark and edgy.

While most of the stories need work, there are a few standouts. “Luke’s Lost Manuscript” is a twisted story about a fan wrongly delivering a story to one of his favorite writers, and “Goat Man,” in which author Bret McCormick takes the concept of an urban legend and goes to creative, unpredictable places with it. The story that stands out the most, though, is “A Dark White Postscript,” by the anthology’s editor, E.R. Bills. An elderly man is found burned to ash in his East Texas home, with no damage done to the floor or furniture, and when the local sheriff looks into his town’s history of racial violence, the story mines Texas’ own to haunting, sad effect. Some also have fun making good use of Texas’ history, makeup, and even dialect, as in “The Man from Plan(e)t X,” by Michael H. Price, a fun, quick romp told in the heavy Texan accent of an industrial businessman who comes across some unusual pieces of metal from Roswell, New Mexico.

Sad to say that the majority of the stories aren’t as scary or memorable as they could be. The ones that stand out shine bright and will definitely keep readers up at night and haunt them for days after.