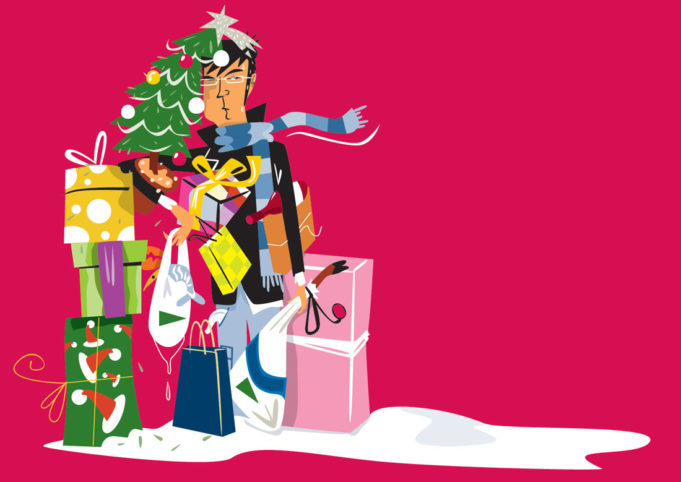 Well, it’s getting chilly out there some nights, and I still don’t own a pair of jeans or any long pants. Still don’t have a jacket. Not from poverty. It’s just that growing up in New York City trained me what cold could be about, and I guess I’ve just refused to believe that Texas ever gets cold. Which leaves me freezing now and then, but I’m a stubborn old coot and won’t give in to it.

But freezing now and then is the easiest part of winter. Surviving spikes in blood pressure as a dad and granddad during the Christmas season is where things actually get tough. And they come from so many angles that you can’t be prepared. Last week, my oldest sister, who has been sick for a very long time, passed away. She died four hours before my daughter Madeleina and I were set to fly out to New York to see her. We went anyway, just to see my other sisters and my brother and my late sister’s widower. We had what I thought was a wonderful day, and then my daughter and I had two more days in New York, during which she got to spend quality time with my youngest sister, and I got to spend time with old friends. It was sad, but we still had a good time.

It was tough being torn into, but I understood my daughter’s anger and promised to try to be a better person and a better dad starting that moment.

It is going to be tough. I’m still sort of in love with my ex, who hates me but comes for coffee most mornings. I adore her two new daughters and feel like I’ve been helping to raise them — in a small way –– since they were born. You can imagine that I don’t see them as often as I would like when my ex is in one of those “you suck” periods, which seem to be coming with more frequency. We’ll make up before Christmas, for sure. Everyone would be devastated if she and her daughters didn’t come to my house on Christmas morning for the great present unwrapping.

Between now and then, of course, I’ve got to keep my ex’s daughters from telling my oldest son’s younger daughters that Santa may not be real. And I will go out late and find a tree that Madeleina will decorate. It will be a poor excuse for a tree, but she’ll make it look pretty.

The tree is the least of my worries. There are generally 12 stockings to fill, and if you include the $20 bucks of scratch-offs that go into each, they come to about $100 a stocking. The heck with the money. The real issue is that if each stocking is stuffed with about a half-dozen small presents, that’s 100 gifts that need to be planned and bought. And after 20 to 30 years of buying stocking gifts, there just are not that many more to find.

Then there are the presents. There is my ex and her two young daughters; two grown sons, one with a girlfriend, one with a lovely wife and the two beautiful daughters; my daughter and her live-in boyfriend (a great guy); and something for whomever is temporarily living at my house at the time. The kids are grown. What the hell do you buy a 33-year-old son or daughter-in-law who can buy anything they want and probably already have? What do I buy for my 30-year-old son or my beautiful daughter? I have no idea. I slug through it somehow, because that’s what Santa does, but it ain’t easy. You have a dozen people, and you want to surprise them all with something that knocks them out. Again, the box of Frappuccino for each adult is easy, but where do you go for the next couple of things for each and then what single big thing would they love? Christmas, or whatever holiday you celebrate, is absolutely one of the key dad responsibilities in life, and a box of apples from Washington State just doesn’t cut it.

Then the day comes. I generally have already opened a bottle of cabernet to handle the stress that the blood pressure pills can’t. And then we dive in, and for two hours everything is generally perfect. Either that or the wine makes it seem like it’s perfect.

And then they split, everybody going off to other parts of their families, and I’m left alone with bags full of wrapping paper and boxes to put in recycling. But since my time with all of them is always too short, I put on corned beef and cabbage, and I know that when they are finished collecting presents at friends’ and other family members’ houses, one by one that magical meal will make them all troop back. And that dinner almost makes it all worthwhile.

Until it dawns on me that I’ve spent every last cent I could find and that in one week the property taxes and house insurance bills — a measly five grand — are due. And then the stress starts to spike again. And I reach for another bottle of cabernet.

Yeah, life will kill you. But Christmas doesn’t have to.