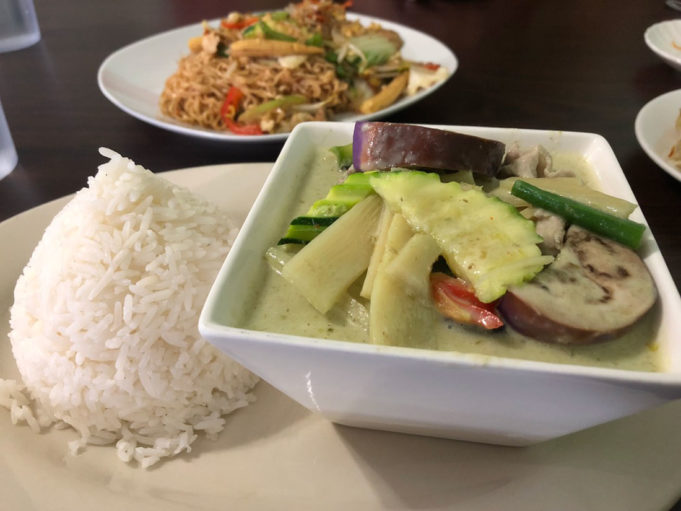 In my years as a culinary detective, few things give me greater pleasure than finding a worthy off-the-beaten-path gem. I’m not sure if Ocha FTW Thai Cuisine (4100 Rufe Snow Dr, NRH, 817-849-9111) should qualify as hidden, since pretty much everyone I know who lives in or near North Richland Hills swears by it, but it was way off my radar.

From the outside of Ocha, the Thai word for “tasty,” the tumbledown stripmall eatery looks like your typical hit-or-miss dive. I’ve been to dozens of places that you have to grade on the good-for-a-dive curve, and the convenience-store-looking awning lined with florescent lights tricked me into thinking I was in for a pretty mundane experience. I walked in hoping for the best and fearing the worst. I left more impressed with any restaurant that I’ve visited in a while.

If the outside was iffy, the interior was downright cheery. Freshly painted foam-green walls lined with obligatory Buddhist bric-a-brac, new-looking tables and chairs, clean tiled floors, sleek track lighting, and lively Christmas decorations all set a downright sophisticated tone. It’s abundantly clear that someone cares about this place. Every inch looked cleaned and well maintained, including the office-tile ceilings, which are always (always!) stained and dusty at most holes in the wall. Not so here. The owners (or whoever decorated) didn’t just run down to Michaels and buy some vague food-related stock art. Everything hanging on the walls or set in the dining room or on tables had a good reason for being there.

Though they aren’t on the lunch menu, the steamed dumplings ($6.95) from the dinner menu spoke to me. The open-face morsels looked like sushi rolls draped in a gossamer-thin wrapper and stuffed with well-seasoned ground pork, bamboo shoots, and mushrooms. The accompanying sweet soy sauce was more tangy than cloying. This visually impressive and utterly delicious starter set the stage for more of the same.

The flawless soft egg noodles on my guest’s Mamma Special ($8.95) peaked out beneath a kaleidoscopic palette of tender chicken, bean sprouts, onions, cabbage, carrots, baby corn, snow peas, celery, mushrooms, zucchini, and bell peppers. Even at a spice level 2, an electrical current of heat crackled throughout the fresh-tasting dish.

The spice level was more subdued in my entree, though it still tickled the throat. A hillock of steamed rice was served alongside a green curry ($8.95) that could cure a cold, or at least ward off the cold of winter, with its unctuous base of coconut milk and curry paste that smoothed the way for bamboo shoots, bell pepper, eggplant, fresh basil leaves, tender bites of pork, and julienned eggplant with the skin left on –– which gave the veggie the appearance of tuna maki wrapped with purple seaweed.

Though it’s been around less than two years, Ocha appears to have amassed a loyal following. If, for example, you visit any rating website that features the place, the reviews read more like religious testimonials than critiques. Count me in as a new devotee.