Dear reader, it has been a long ol’ time, perhaps even a long-ass time, since we sat together to chat. August 22, 2018, to be exact. I’ve been away. Not in the sense of being incarcerated, at least not in the sense of judicial incarceration. I self-incarcerated at the end of last summer to start a couple of exciting projects, none of which are germane to our conversations, though they might come up in the future.

As is common in the online space and throughout cable news to aphoristically exhale that “every day feels like a week,” given the unrelenting fucktardery of the person occupying the White House these past two years, for whom “Mango Mussolini” is my current favorite sobriquet (h/t several Facebook commenters). So, I am compelled at this point to take a step back and see how this land, our land, has shifted since we last got together. There has indeed been a lot of shit going down, and by that I mean shit rolls downhill. In this endeavor, the rainbow of OCD that is the internet is our friend. Not for us long hours and late nights of poring over archives and microfiche in a deliciously dusty and dusky library. You know me well enough by now to understand that if I am anything consistently, I am straight with you. The following deep trawl through our world’s events these past five months is brought you by the first result to present itself from a cursory Google search: “in the news insert: name of month here.” Try it. You might like it.

There really has been a shitstorm, a maelstrom, a tsunami of genuinely significant events among the shiny objects and outrage du jour. While I am not going to bore you with an exhaustive list, I must insist on an exhausting sweep through the lowlights of recent months. This is to say nothing of the natural disasters, war zones, famine, and other assorted general misery going on outside our shores. If the world feels like a hazardous place, that may well be because it is. However, all that glows is not to be feared.

September brought the witheringly familiar rounds of shootings: San Bernardino, Calif.; Cincinnati; and Bakersfield, Calif. Scores of people were murdered; mostly people shrugged it off after a fleeting bout of Philip Larkin-esque compassion fatigue. “Poor soul, They whisper at their own distress.” Ima rate this hazmat — toxic ennui.

As September bled into October, Brett Kavanaugh was still oiling his way through Congressional interviews, attached to the lie that he is just a super-intelligent family man. Further lies would follow. By October 6, the ranting, beer-loving, self-styled media victim was confirmed to the U.S. Supreme Court. The social archconservative can take a dump on the dying skeletal frame of RBG live on C-SPAN or some such, and he will retain his Senate-given right to legislate away women’s right to freedom of choice over their own bodies. Ima rate this extreme hazmat — multiple sources of toxicity of the highest level.

During the rest of the month, we watched on as emboldened white supremacists continued to feel they could do whatever the fuck they pleased. African-Americans were even more unsafe than usual in attending church and/or going to Kroger. Democrat politicians and others with opposing views to the current POTUS found themselves terrorized by a bodybuilder, a pizza delivery whack job-cum-failed male stripper who became a failed mail bomber as he was arrested in Florida after sending Dem pols pipe bombs. None of which detonated. Turns out he was living in his van (down by the river, I assume). Extreme hazmat –– POTUS-enabled race hate. Did I mention the 12 Jews who were killed while worshipping at their synagogue? It is hard to keep up with the hate among the random acts like four people being killed at a toddler’s birthday party just outside of Corpus Christi.

The start of November brings thoughts of the gentle winding down to Thanksgiving, right? Right. Unless you were one of the seven people shot at a yoga studio in Tallahassee, Fla., or one of three Girl Scouts killed by a bro-zard (“hazardous bro” — a tautology, perhaps) huffing computer cleaner while driving his car, or one of the 12 people killed at a bar shooting. You see, by now, you and me both are starting to be a little flippant about the seemingly constant stream of “same shit, different day” killings and misery. This is how the boiled frog goes as that which was once hazmat begins to feel less toxic, then no hazard at all. Yet still it continues, and so must I.

As the month wore on, more Americans were murdered while flagrantly visiting the mall and the hospital. The big national event of the month came on November 6 as the midterm elections took place. As I drove home westward from Dallas that night, the mainstream news media seemed to fix its narrative early –– no blue wave, this … a disappointing night … success for the White House … the next generation of Dems defeated as Beto, Andrew Gillum, and Stacey Abrams were all cast asunder electorally. If cable news and public radio had been able to exercise a little more impulse control than the average toddler, in calling the results of the election, they would have enjoyed November 6 a whole lot more. A week or so later, the downcast Maddow and browbeaten Cooper reveled in not a blue wave but a “tsunami.” Any hazmat herein is found in the toxic stew of self-doubt and self-flagellation so prevalent on the political and journalistic left.

December –– the holidays, amiright? Not so fast, my crappily sweatered friend. George H.W. Bush died, and Fort Worth District Judge Reed O’Connor gave the middle finger to the 2012 U.S. Supreme Court ruling in favor of Obamacare. Just as we drew breath, ready for the festivities, relax-ye-not ’cos here comes a government shutdown.

Look, much of this is sad. A lot of it is genuinely hazardous material. The sweeping arc of history will not care to dwell on, less remember, much of what makes life the universe and everything feel full of hazmat on the daily. Of the things covered here, the Bush death, November midterms, and the Kavanaugh hearing will endure. That is how history is. The senseless deaths will conglomerate as data points. The truly hazardous stuff is not material but more gaseous. The hundreds of lies told by the current POTUS; the invisible misery of children separated from their parents as they come across the Southwest border in pursuit of their American Dream; the as-yet-unseen treason at the heart of our government; the obvious but not readily evident degradation of our planet and its resources. This past November, the world commemorated the centennial of the end of World War I (well, those not afraid of getting their so-called hair wet). Let us think of today through the words of Wilfred Owen, a poet killed less than a week before the armistice, whose words are apposite: “Gas! GAS! Quick, boys! — An ecstasy of fumbling / Fitting the clumsy helmets just in time –  / As under a green sea, I saw him drowning. / – ‘Dulce et Decorum Est.’ ” 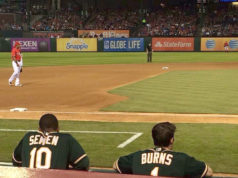