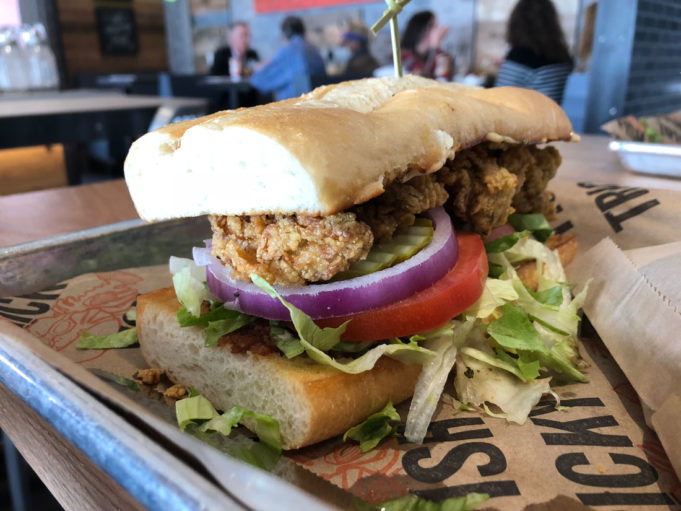 I don’t understand crazes. Why do some foods take a cult-like hold of people while other, just-as-good-dishes are relegated to also-rans of area menus? Take pho (pronounced fuuuu), for example. I get that the traditional Vietnamese meat and noodle soup is tasty and makes diners feel superior for being on the front end of a trend, but how did that soup capture the hearts of hipsters and not, say, clam chowder or lobster bisque?

I’m fairly certain I don’t possess the pull to engineer a new craze (I’m not even on IG), but if I did, I’d throw my imagined weight behind the po’ boy. What’s not to like? The Cajun sandwich meets all the criteria of a proper it dish: It’s culturally unique, born from poverty, versatile, and, in the right hands, can be elevated to haute ambrosia.

My three favorite local iterations of America’s new favorite dish are as follows: the fried shrimp po’ boy at Flying Fish (2913 Montgomery St, 817-989-2227), with its crunchy cornmeal batter and straightforward presentation served with the house tartar sauce; the enormous blackened shrimp version at Twilite Lounge (212 Lipscomb St, 817-720-5843); and, the latest find in my holier than thou pursuit, the fried oyster sammy at Tricky Fish (3720 Convair Dr, 817-731-5882), the newish coastal Cajun eatery set in Waterside.

Like Twilite Lounge, Tricky Fish is the first expansion of a Dallas-area eatery, but unlike the music venue/late-night-serving Twilite, Tricky Fish has the sleek look of a restaurant that was made to be scaled and franchised all around the country.

The industrial-looking interior of wood and metal is generically nice – like the kind of place a focus group might have dreamed up. Still, the floor-to-ceiling windows, exposed air ducts, attractive wood tables, comfy booths, and hopping bar on one side of the large one-room eatery make for an attractive, bright lunch setting.

The place makes a strong first impression, too. My guest and I were seated promptly, our polite, attentive server greeted us right away, and the food came fast – a bit too fast, as the entrees arrived on top of our appetizers.

On our server’s recommendation, we started with the fried green tomatoes ($9), perfectly crispy and topped with blackened shrimp and a creamy remoulade. The piping hot cornmeal batter clung to the tomatoes like yoga pants after each bite –– a sign of a skilled hand on the fryer. Less successful was the Kitchen Sink Gumbo ($8.50), whose dark roux, andouille sausage, and chicken was under-seasoned and overshadowed by too much flavor-robbing rice. The classic one-pot Cajun dish was fine after I added a healthy heap of hot sauce, but it was a shame that I had to.

Since the fried oyster B.L.T. ($12) arrived right after the apps, I had plenty of time to size up the goliath of fresh, soft bread, colorful tomatoes, chopped lettuce, briny, tender oysters, and a twin saucing of tangy tartar and sweet, salty bacon jam. My mouth may have been full of gumbo, but my imagination was fixed on that po’ boy. The first bite didn’t disappoint. The complementary ingredients shone through and lent balance, but the oysters were the unquestioned stars of the show.

My guest’s blackened catfish po’ boy ($10), served with the same set-up sans bacon jam, was cooked beautifully and seasoned well, though it played the undercard to its more complex sister dish.

Can we do this, Fort Worth? Make po’ boys the new ramen, cupcake, fuuuu, or whatever else you’ve been photographing on IG? I don’t even need credit for this one – I just want to eat some more.